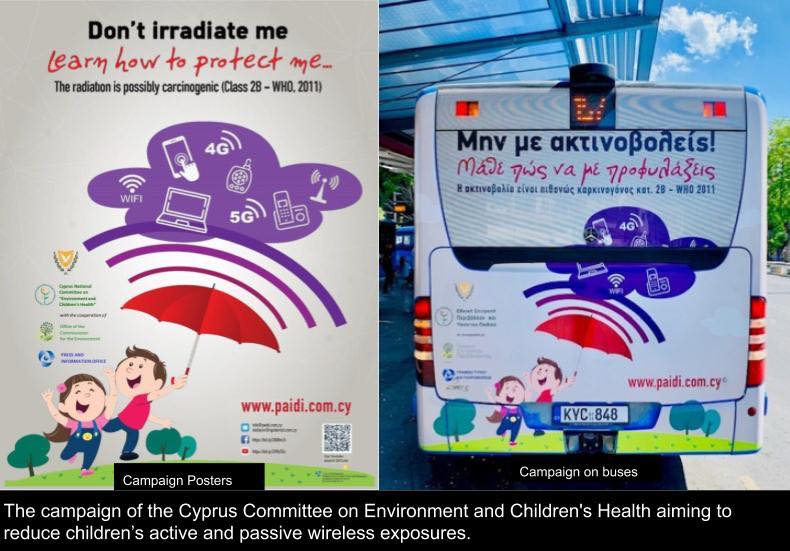 Cyprus has launched an awareness campaign to educate the public on how to reduce wireless radiation exposures.  The campaign includes large scale signs on pubic buses with the slogan “Don’t Irradiate Me: Learn How to Protect Me” along with posters, brochures, and videos translated into both Greek and English.

The Campaign of the Cyprus Committee on Environment and Children’s Health is under the auspices of the Minister of Health Mr. C. Ioannou and in cooperation with the Cyprus Office of the Commissioner of Environment and the Press and Information Office, and with the participation of the Archbıshop Makarıos III Hospital.

To see the Campaign presented on the Cyprus Committee on Environment and Children’s Health website click here.

The Campaign was launched at a press conference on June 24, 2019, with recommendations include simple advice on how to protect children at home 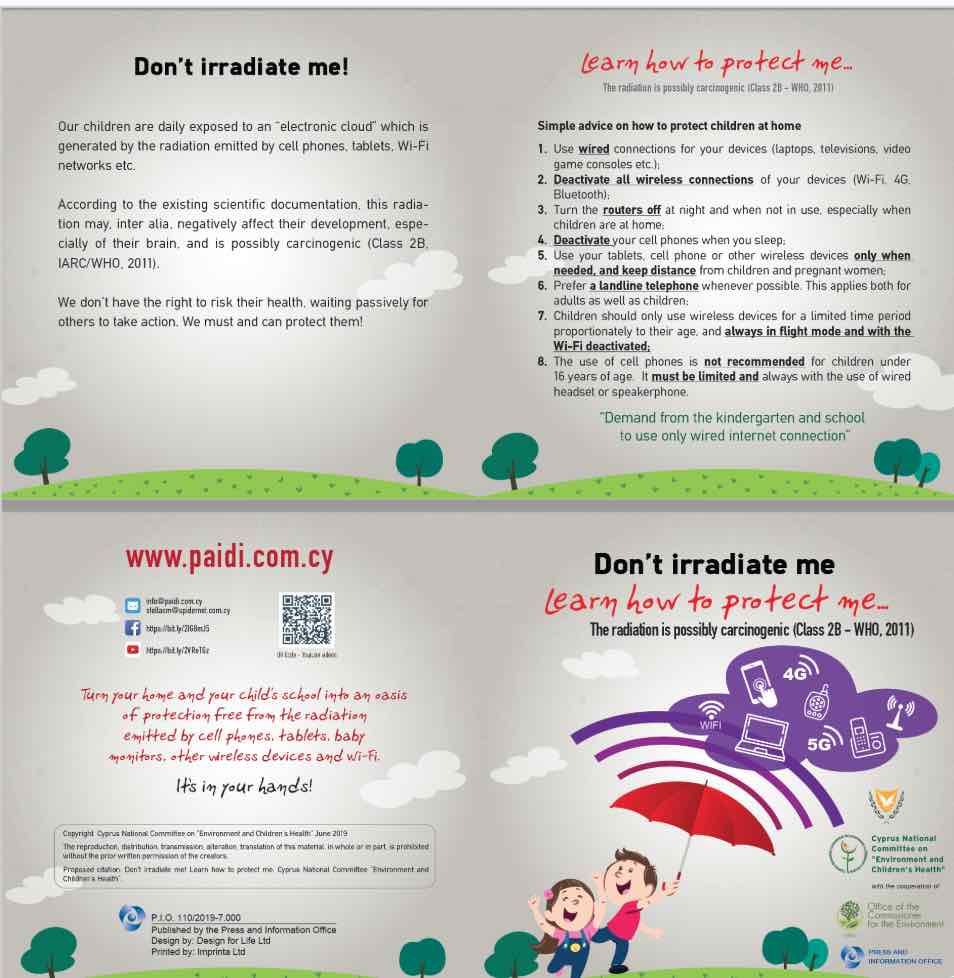 The Campaign is featured on the website of the Cyprus National Committee on Environment and Children’s Health and offers educational resources such as posters and brochures with recommendations. The Committee is internationally renowned for their technology safety videos on wireless for parents, teenagers and pregnant women. Cyprus–along with France, Israel, Belgium, and French Polynesia- already has banned Wi-Fi from nursery schools and the country has decreed that Wi-Fi be removed from elementary schools.

At the press conference, the President of the Cyprus National Committee on Environment and Children’s Health,  Dr. Stella Canna Michaelidou spoke about the need to use the basic tool of awareness. The Minister of Health expressed his full support for the Committee’s work pointing to scientific evidence demonstrating the harmful effects and basis for action from the of the Convention on the Rights of the Child and the Nicosia Declaration 2017 of the Cyprus Medical Association, the Vienna/Austrian Medical Chambers and the Cyprus Committee. In her address, the Commissioner of Environment, Mrs. Ioanna Panayiotou stressed that “there is an urgent need to inform and raise awareness about the need to drastically reduce the use and exposure of children and embryos to radiation. Especially at home and at school where children spend at least 60-90% of their time – depending on their age.”

“Bus advertisements are an excellent way to get this message out. We applaud Cyprus for their strong investment in children’s health and disease prevention,” stated Theodora Scarato Executive Director of Environmental Health Trust which maintains the largest database of protective international action on wireless radiation.