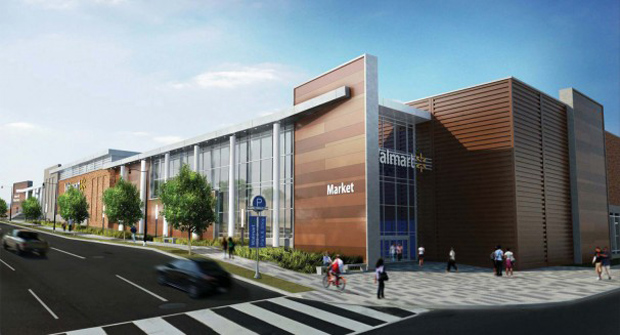 D.C. lawmakers gave final approval Wednesday to a bill requiring certain large retailers to pay their employees a 50 percent premium over the city’s minimum wage, a day after Wal-Mart warned the law would jeopardize their plans in the city.

The retail giant on Tuesday linked the future of at least three planned stores in the District to the proposal. But the ultimatum did not change any legislators’ minds. The 8-5 vote, which came after a hourlong debate in a packed council chamber, matched the outcome of an earlier vote on the matter.

“The question here is a living wage; it’s not whether Wal-Mart comes or stays,” said Vincent Orange (D-At Large), a lead backer of the legislation who added the city did not need to kowtow to threats: “We’re at a point where we don’t need retailers. Retailers need us.”Should the bill be signed by Mayor Vincent C. Gray and pass a congressional review period, retailers with corporate sales of $1 billion or more and operating in spaces 75,000 square feet or larger would be required to pay employees no less than $12.50 an hour. The city’s minimum wage is $8.25.While the bill would affect several existing District retailers — such as Macy’s and Target — an extended grandfather period and an exception for unionized businesses has made it clear the measure is aimed at Wal-Mart, which has announced plans to open six stores in the city.“Nothing has changed from our perspective,” said Wal-Mart spokesman Steven Restivo in a statement released after the vote reiterating that the company will abandon plans for three unbuilt stores and “review the financial and legal implications” of not opening three others already under construction.

The vote sets up a difficult veto decision for Gray, who has supported Wal-Mart’s entry into the city, arguing the company would bring badly needed jobs and retail to neighborhoods in need of both.

Gray (D) made a particular push to have Wal-Mart anchor a development at Skyland Town Center, a site along Alabama Avenue SE near the mayor’s home that has long been eyed by city leaders for renewal.

Gary D. Rappaport, the project’s developer, has said Wal-Mart’s withdrawal would put those plans on ice. “If there’s not a Walmart at Skyland then Skyland is not able to go forward at this time,” he said in a statement on Tuesday.

The mayor called Wal-Mart’s Tuesday announcement “immensely discouraging,” hinting more strongly than ever that he is prepared to veto the legislation: “I strongly urge the Council to consider whether this legislation will actually promote strong economic development in the District and expand job opportunities for District residents.”

Gray said much the same in a letter to council members delivered Wednesday: “It is clear that numerous issues remain unclear about the impact of the bill on the District’s current economic development renaissance,” he wrote.

The debate over the living wage bill has been highly pitched, echoing conflicts elsewhere in the country over similar measures targeting Wal-Mart and other “big box” retailers.

Several dozen pro-Wal-Mart protesters rallied on the front steps of the John A. Wilson Building Wednesday, while inside a larger group of living-wage supporters walked from council office to council office hoping to pick up additional votes.

“If you allow a bully to bully you, it’s never going end,” said the Rev. Graylan Hagler, the senior pastor of Plymouth Congregational United Church of Christ and a leader of pro-living-wage group Respect D.C. “There will be something else. There will always be another agenda.”

Prior to this week, Wal-Mart had made statements opposing the bill but had not directly threatened to withdraw from its plans.

The recent tactics echo the retailer’s first incursion into an American urban center seven years ago, when the Chicago City Council passed a similar “living-wage” measure. The company indicated then that the bill would cause it to scale back or entirely scrap its plans to open several stores, Mayor Richard M. Daley vetoed the bill, and the council failed to override it. In March, New York raised its minimum wage only after a compromise offered tax subsidies to firms such as Wal-Mart that hire seasonal workers.

Ken Jacobs, chairman of the University of California at Berkeley’s Center for Labor Research and Education, who has investigated Wal-Mart’s wage policies, said the firm has opposed living-wage laws and other measures that target its business practices, particularly in urban markets.

“When asked about labor law, they generally say, we follow the laws of the jurisdiction in which we’re operating,” he said. “But it’s also clear when they say that, that they put a lot of weight on shaping the laws in the jurisdictions where they are operating.”

Alex Barron, a regional general manager for Wal-Mart U.S., wrote in a Washington Post op-ed piece published online Tuesday that the wage requirement “would clearly inject unforeseen costs into the equation that will create an uneven playing field and challenge the fiscal health of our planned D.C. stores.”

As a result, he wrote, the company “will not pursue” stores at three locations where construction has yet to begin — two in Ward 7, including Skyland, and one in Ward 5 — if the bill passed.

Barron added that the legislation, if passed, would also jeopardize the three stores underway, pending a review of the “financial and legal implications.” While precise terms of its agreements with developers are not known, the company’s leases could be difficult to break without major financial penalties.

That outcome, said Yvette Alexander (D-Ward 7), constituted her “worst nightmare.” She moved unsuccessfully to table the bill Wednesday before voting against it.

Orange, early in the debate, said the “District has arrived” as a desirable place for major retailers to locate. But Muriel Bowser (D-Ward 4), a mayoral candidate, said that was not true throughout the city. “When I go to Skyland, we have not arrived,” she said. “That project has been some 20 years in the waiting.”

Tim Craig and Jonathan O’Connell contributed to this report.