Dylan Petrohilos, a 28-year-old graphic designer, said officers broke through the door of his Petworth home early April 3. Police were led to the house after an undercover police officer secretly attended protest-planning meetings in the weeks before the Jan. 20 inauguration, court documents show.

Authorities seized cellphones, computers and a black “anti-capitalist, anti-fascist” flag from Petrohilos’s front lawn, according to the court documents.

Petrohilos has not been charged with any crimes. He says he did nothing illegal as he helped plan the protests and participated in them.

The search was part of an effort by authorities to build a legal case against hundreds of activists accused of conspiring to riot and incite violence on the day President Trump was sworn in. But it also has reignited concerns from activists and others who question whether police went too far in making mass arrests Jan. 20 or in investigating demonstrators exercising their right to free speech. 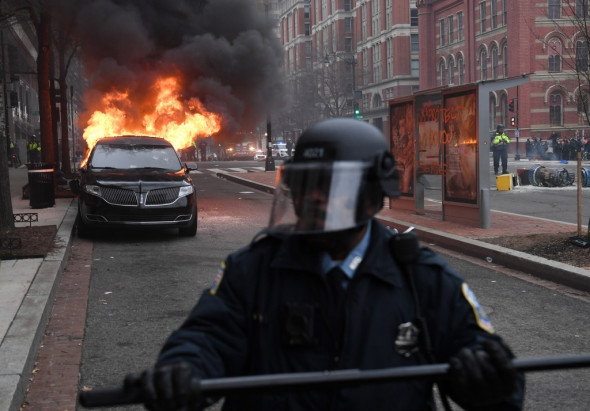 “We believe this is an aggressive assault on the right to organize, to protest,” said David Thurston, an organizer of Disrupt J20, a group that planned protests at the inauguration.

The D.C. Superior Court document — an affidavit providing justification for searching Petrohilos’s home — shows that law enforcement infiltrated several meetings where Disrupt J20 organizers discussed logistics. One was a multiday “action camp,” according to the affidavit. At another, the undercover police officer and other attendees were asked to place their cellphones in a microwave for fear that law enforcement or people opposed to the group were seeking access to their plans, the document states.

Authorities have alleged that members of Disrupt J20 were behind inauguration protests that turned violent. Some activists, wearing masks and dressed in black, smashed downtown store windows and burned a limousine, resulting in more than $100,000 in damage, officials say. Six officers were injured, including one who was knocked unconscious when a brick or piece of metal thrown by a protester hit him in the head. Officials allege that the protesters employed “black bloc” tactics, most commonly linked to anarchists.

Police arrested people en masse, and 214 were indicted by a grand jury on charges of felony rioting. One person has pleaded guilty to lesser charges. In the other cases, investigators are working to identify each person’s role in the demonstrations.

Petrohilos was not arrested on Inauguration Day, but court papers say an undercover officer was there when the activist facilitated a Disrupt J20 meeting at a Mount Pleasant church Jan. 8.

“A question was posed by an attendee [at the planning meeting] about how “arrestable” this march was, and Petrohilos noted that MPD does not conduct mass arrests in Washington D.C.,” the affidavit says. “Petrohilos further states that the organizers were asking the participants to wear all black clothing, and the participants should not wear unique clothing because that will make it easier to question or identify them.”

Petrohilos said in an interview that police broke through his door on the morning of the search. He said there is no incriminating material on his computers or phones. As a graphic designer, he said, the posters and fliers he made advertising protests on Inauguration Day account for the bulk of the files on his devices.

“Facilitating public meetings is a First Amendment-protected activity,” he said. “I didn’t break the law on Inauguration [Day], and I think that it’s absurd that police are targeting events such as facilitating a public meeting.”

Organizers of the Disrupt J20 protests decried the search as a “desperate” attempt to try to build criminal cases. They held a news conference last week to bring attention to what they called the “unjust” police tactics used on protesters.

D.C. police defended the search and said in a statement that it was related to an ongoing criminal investigation.

“We cannot comment on the specifics of this case, out of concern it would jeopardize the investigation,” police said. “A judge found enough probable cause to issue this search warrant, and we believe it was in line with our mission of ensuring the safety of all District visitors and residents.”

The search warrant affidavit says a seized cellphone belonging to a man arrested at the protests showed that he had been texting with Petrohilos. Petrohilos, according to the affidavit, told the protester that he would be providing route information for the “anti-capitalist” march.

The affidavit also stated that police heard protesters describing plans during a podcast on an anarchist website. The self-identified anarchists said that protesters were excited to create a mess on Inauguration Day and that the chances of arrest were low.

The unidentified duo on the podcast said that D.C. police had “been sued into a state of fear” and are now “trained little piggies.”

The two were referring to the 2002 protests against the World Bank that resulted in the arrest of almost 400 protesters and bystanders at the District’s Pershing Park.

The District and federal authorities in April 2016 settled the final lawsuit filed by demonstrators at Pershing Park, bringing the total payout for the arrests of protesters caught in a “trap and detain” policy to $13.25 million.

Police have acknowledged that mistakes were made during the Pershing Park demonstrations but have said that during the inauguration, they strategically targeted protesters after the situation turned violent.

Legal arguments over privacy and free speech rights also have become a key part of the pending criminal cases.

On Tuesday, an attorney for Marisa Matthews, a protester from Pittsburgh charged with felony rioting, filed a motion in D.C. Superior Court seeking to have her case dismissed. Matthews says that the government violated her First Amendment rights by, in part, infiltrating planning meetings she attended and that she is being prosecuted for associating with the protest group.

“People now fear that if they attend a protest where someone they don’t know destroys property, then regardless of innocence they will be charged with felonies,” the motion says. “This is unhealthy for a Constitution that lives and dies with the vitality of its First Amendment.”

In addition, dozens of the defendants are seeking to block a government request to search more than 100 locked cellphones seized during the Inauguration Day arrests.

“You have your own private photos and videos on there no one has the right to see,” said defense attorney Patrice Sulton, who represents one of those charged. She said the court should review the material first and decide what is relevant.

One of those arrested has reached a deal with prosecutors, who reduced his charge to misdemeanor rioting in exchange for a guilty plea. Jack Sorensen, 18, of Pittsford, N.Y., admitted to being dressed in black, wearing goggles and concealing his face with a mask at the time of the rioting. Sorensen did not admit to causing destruction. His lawyer did not respond to a request for comment.

As part of the plea, prosecutors agreed to one year of supervised probation, a $500 fine and 50 hours of community service. Sorensen was sentenced under the Youth Rehabilitation Act, which would allow him, should he successfully complete probation, to emerge with no criminal record because he is under 22.