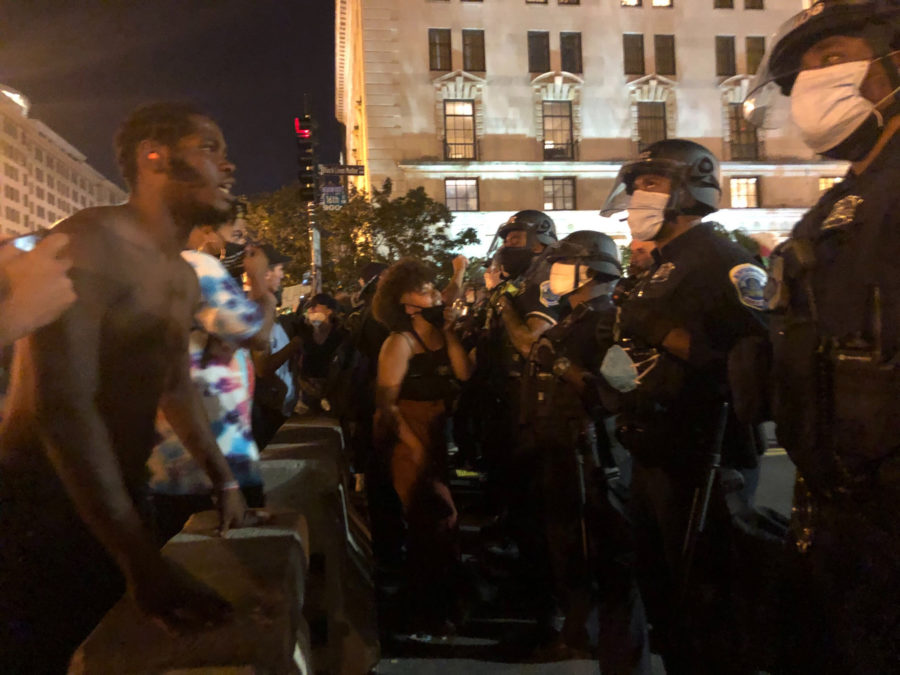 DC Police Ramp Up Aggressive Tactics After March On Washington

Above photo: Police confront demonstrators in downtown D.C. early on Aug. 30. ‘This has been a show of force that hasn’t been seen in a while,’ one organizer said. By Jenny Gathright for WAMU.

Friday’s March on Washington brought massive crowds to downtown D.C. and ended without any significant confrontations between police and protesters. But as demonstrations bled into the weekend, the response from authorities took a combative turn.

Louise Van Assche, a documentary filmmaker, traveled from Austin, Texas, to D.C. for the March on Washington. She wanted to gather footage that would inspire hope for a film she is creating about this summer’s protests against police brutality.

“It was just one negative story after the other because the police are pretty violent in Austin,” Van Assche said early Sunday morning. “I wanted to have this positive ending of my film … that’s why I was here. I didn’t think it would turn out to be this. This was the biggest police force I’ve ever seen in my life. To me, it felt like a war zone.”

Locals who had been going to demonstrations in the District since the end of May said it was some of the most aggressive policing they had experienced at protests. Police deployed flash bangs and sprayed protesters with chemical irritants. Street medics with Medics for Justice, who have organized to provide medical assistance at protests throughout the summer, rushed to aid protesters who had chemical sprays in their eyes and were injured by what appeared to be nonlethal bullets and flashbangs.

Earlier this summer, Mayor Bowser signed both temporary and emergency legislation banning MPD from using irritants to “disperse a First Amendment assembly.” But it’s not clear how the law would apply in this instance.

A spokesperson for MPD wrote via email to WAMU/DCist that there were a group of individuals that were “intent on damaging property and injuring Metropolitan Police Department officers” who began to engage in “riotous behavior.”

The D.C. Police Union tweeted Sunday morning that a police officer was taken to the hospital after a protester directed a laser into his eye, causing vision loss.

“In an attempt to stop these individuals, MPD deployed sting balls and tear gas,” wrote the spokesperson. “As a result of the riotous behavior, five individuals were arrested and charged with Assault on a Police Officer, Felony Rioting, Reckless Driving and Possession of Unregistered Ammunition.”

Louise Van Assche spoke to DCist/WAMU early Sunday morning, a few blocks away from Black Lives Matter Plaza as she was leaving the night’s protests with a group of visitors from Austin. She had a burn on her leg. Earlier in the night, a police officer had pushed his bike onto her, and as she began to retreat, she says she was hit by a flash bang.

“I didn’t expect them to be like this, because I was keeping my cool—I was very polite,” Van Assche said.

Protesters marched through the District’s streets for hours Saturday. Some toppled newspaper boxes and set small fires in Adams Morgan around 9 p.m., the Washington Post reported. According to accounts from journalist Abdallah Fayyad and protesters at the scene, tensions escalated shortly before midnight on Saturday after a protester was arrested in Black Lives Matter Plaza, near St. John’s Church at the corner of 16th and H streets NW. Police repeatedly deployed stun grenades and chemical irritants to move protesters north on 16th Street towards K Street, according to Fayyad.

Unlike some of the policing of protesters in late May and early June, where federal police forces were participating along with the Metropolitan Police Department, police on Saturday night and Sunday morning appeared to be only with D.C.’s local police force. The protesters were a mix of locals, many of whom had been participating in protests throughout the spring and summer, and people who had traveled to the District from cities across the country for Friday’s March on Washington.

DC police, after firing flash bangs with chemical irritants, cleared the intersection at K and 16th streets, arresting the driver of this van and at least one occupant. #DCProtests pic.twitter.com/1VxcHK4F3C

“Tonight is very reminiscent of the days of early June when the police had no care or concern for public safety or health,” said Mahadi Lowal, who has been organizing and attending protests all summer. “Two weeks ago, [MPD] did kettle and arrest 41 people, but for the most part, they’ve been calm and relaxed. This has been a show of force that hasn’t been seen in a while, and it’s really scary.”

Shortly after 1:30 a.m., about 100 protesters remained at the corner of 16th and K. As a protester threw rocks at police, officers again fired flashbangs into the crowd, sending demonstrators running. The air was thick with smoke that caused people to cough. Several protesters sought help from medics, who helped them wash chemical irritants from their eyes with saline solution. Around 2 a.m., a crowd began to retreat north up 16th Street and encouraged others to do the same.

“Pick your battles wisely,” one protester with a megaphone told the crowd, urging them to march away to a place where there were fewer police officers.

A smaller group of about 40 protesters chose to stay. Police in riot gear pushed protesters west on K Street.

Patrick, a 28-year-old protester from Prince George’s County who declined to share his last name for privacy reasons, said Saturday evening into Sunday morning felt “way more aggressive” than other protests he had participated in this summer. But he was buoyed by the support of protesters who had come from other cities and immediately tried to connect with him.

“I have met people from Seattle, from Milwaukee, giving me their phone numbers, saying, ‘You should come out and stay with us,’” the Maryland resident said.

“I think these people here are just as angry, they’re just as hurt, they’re just as upset, and they’re mourning the same deaths that we’re mourning,” said Danialle James, who traveled to D.C. from Portland, Ore., for Friday’s March on Washington and stayed in town for the weekend. James said she saw similar police tactics at protests in both cities.