By Staff, www.PopularResistance.org
June 20, 2017
| Resist!
D.C. United Against Hate Rally2017-06-202017-06-20https://popularresistance-uploads.s3.amazonaws.com/uploads/2017/12/popres-shorter.pngPopularResistance.Orghttps://popularresistance-uploads.s3.amazonaws.com/uploads/2017/06/DC-Rally-Against-Hate-e1497984408277-150x91.jpg200px200px
Rally and Protest
Sunday, June 25 at 11:00 AM to 3:30 PM
Lincoln Memorial, Pedestrian Plaza (East side of Memorial)
National Mall
Washington D.C. – June 19, 2017 – On Sunday, June 25 at 11:00 AM a coalition of local community and religious groups will rally at the Lincoln Memorial, Pedestrian Plaza, on the National Mall to oppose a planned gathering of violent white nationalist extremists known as the “Proud Boys.” The rally is organized under the banner of “D.C. United Against Hate” and aims to peacefully bring together groups and individuals to stand together against this growing threat. 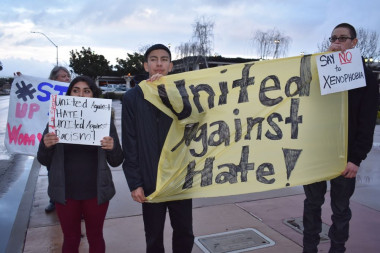 “We need to organize and stand against hate, wherever and however it is manifest,” said Rev. Graylan Hagler, of Plymouth Congregational United Church of Christ. “The loose and reckless speech contributed to the recent violence and murder in the D.C. area and against elected officials at practice for a baseball game. We have had our fill of hatred and hate talk.”
The Proud Boys, an “alt right” group, plan a rally at the Lincoln Memorial in Washington DC. The group has violent reputation and well-documented associations with openly racist and xenophobic leaders and groups. The Proud Boys are calling the gathering a “free speech” event. But the tragic true is that free speech for racists leads to violence and murder.
The Proud Boys gathering comes weeks after the murder of Lt. Richard Collins III at University of Maryland’s College Park campus by an alt-right adherent. The event also comes after the recent killings of two men in Portland by an alt-right associate who continues to defend his action as “free speech.”
Street-level racist organizing and violence have been on the rise in the U.S. This includes the murder of Collins, the attack and killings in Portland, OR, and the noose hung in the National Museum of African American History and Culture. And now comes the word of a possible hate killing of a young Muslim in Virginia on June 18.
These incidents and attacks are fueled by official racism and bigotry from the highest levels of U.S. politics, including the White House. Many of these attacks were carried out by people who identify as “Alt-Right.” There is little new or “alternative” about this racism and bigotry, except for more vocal encouragement from the Trump Administration.
However, the rise of the right is not the only story since the election. Thousands of people turned out at U.S. airports to support immigrants and challenge the “Muslim Ban.” Thousands turned out to oppose the right in Portland, OR, on June 4. This shows that we can push back against the rise of the right. But that is going to take getting organized.
“We plan a broad-based, peaceful action to reflect the values of this region,” said rally organizer Leonard Klein. “We want to make it clear to this sick band of racists, the so called “alt-right” has no place in the DC metro area. We call on people of conscience to stand with us and defend the values of racial unity, inclusion, and social justice.”
We need your help! Join us, spread the word, and have your organization, union, or community endorse this important action!
Please encourage your members to turn out on Sunday, June 25.
Please share our facebook event: https://www.facebook.com/ events/1558821704137512/
Please help us get the word out by contributing to our publicity fund at: https://www.generosity.com/ community-fundraising/dc- united-against-hate-rally
To endorse this event or find out more, please contact me directly or email dcsafetyforall@gmail.com
Thank you for your support.
AltRight Bigory Love Racism
Donations to "Popular Resistance" are tax deductible through our fiscal sponsor:
The Alliance for Global Justice, 225 E. 26th St., Suite 1, Tucson, AZ 85713