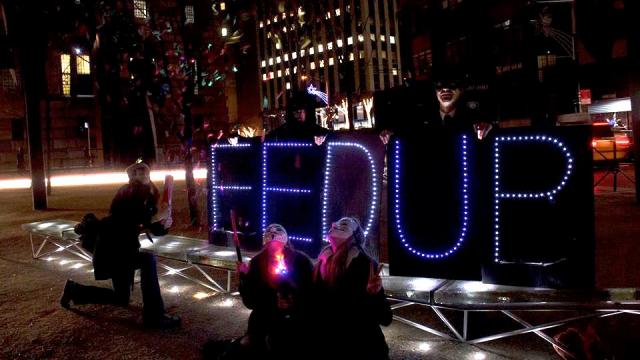 Actions Kick-Off a Year Long Campaign Against the Federal Reserve

A nationwide coalition called FedUp100 has announced plans to assemble at all 12 U.S. Federal Reserve Bank branches on December 23, the 100th anniversary of the Fed, to educate the public and “illuminate” an institution of private banks it says operates in unconstitutional secrecy and darkness. The group’s message on the Fed’s centennial: Reform or Retire.

The #D23 event at Fed branches from New York to San Francisco will kick off what organizers say is a year-long campaign of education, media, mobilizations, publications – and demands – centering around the debt-creation and corrupt economic activities of the Federal Reserve.

FedUp100’s core demand is for the Fed to be brought under federal control, enabling the U.S. government to print dollars interest-free rather than to take on more staggering public debt for money it says a “private banking cartel” is mysteriously, and unconstitutionally, writing into existence out of thin air.

According to the group’s Facebook page, “Nowhere in the U.S. Constitution did the Founders bestow authority to print money on a handful of private banks operating in secrecy from Congress and the people. The right to coin money belongs to the U.S. Treasury alone. For a century the Fed – a network of 12 banks that are 100% privately owned – have controlled our money supply by creating and loaning dollars as DEBT which the public has to pay back with interest.”

The site, which encourages people to “bring flashlights” and also Illuminators that can provide light shows at the different events, goes on:

“Americans are Fed Up with the Fed which is why on its Centennial we will be illuminating it: shining light on an institution that exercises power in complete darkness. Specifically we are illuminating that: “The Federal Reserve is entirely owned by its private member banks; “Our money originates as loans issued by private banks; the U.S. government only issues coins. “The Fed operates in secrecy independent of Congress or the president and has issued trillions of dollars in “quantitative easing” benefiting Wall Street not Main Street; “The last audit of the Fed revealed it had secretly lent $16 trillion at near-zero interest to bail out the big banks. “On its 100th birthday We the People demand the nationalization of the Federal Reserve – Federalize it as the name implies – and the issuance of United States Notes by the U.S. Treasury in accordance to the Constitution. Bring the Greenback!”

At 5 p.m. on December 23, FedUp100 is inviting citizens, coalitions and partners nationwide to join in staging actions at all 12 U.S. Federal Reserve branches including New York, San Francisco, Atlanta, Richmond, Chicago, Dallas, Philadelphia, Cleveland, Boston, Kansas City, St. Louis and Minneapolis, and at the Fed’s Board of Governors in Washington, DC.

On Friday, December 13, at Louise Nevelson Plaza in New York, there will be a warmup party for the main event on #D23. Below is the list of all 12 Federal Reserve Bank locations and #D23 FedUp100 invite page urls: