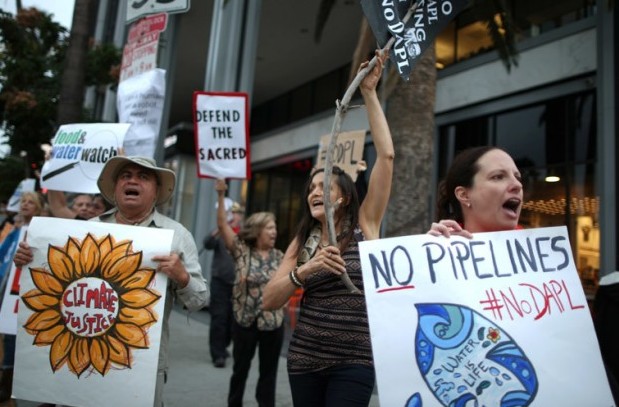 The campaign headquarters of Hillary Clinton in Brooklyn, New York, was taken over Thursday by protesters against the Dakota Access Pipeline being constructed in North Dakota and three other states. They’re demanding the candidate declare where she stands.

Surrounding a drum circle and teepee in the middle of Clinton’s presidential campaign headquarters in Brooklyn was a coalition of Bernie Sanders supporters, environmentalists and members of the Standing Rock Sioux tribe, all demonstrating against the planned 1,172-mile, $3.78 billion pipeline known as the Dakota Access.

The activists who call themselves “protectors, not protesters” are demanding Clinton openly take a position on the Dakota Access pipeline, or DAPL.

Danny from Standing Rock tells #HillaryClinton that if she wants us to #StandWithHer then shes gonna need to #StandWithStandingRock! #nodapl pic.twitter.com/9gVPXLkMYN

The main protests are ongoing in North Dakota, where police ordered evacuations of activists demonstrating on private land reserved for the crude oil project. Other demonstrations have been held in the other states where the pipeline is scheduled to cross into, South Dakota, Iowa and Illinois.

#sanders as usual fighting for what is right!!! And to no surprise #Hillary silent as usual. #StandingRock #NoDAPL #BringBernieBack pic.twitter.com/FeVKCEpTe3

Other Clinton campaign offices were also targeted in solidarity on Thursday, including the one in Seattle, Washington.

Solidarity #NoDAPL action about to go down in at Seattle @HillaryClinton HQ! We need to end her silence on DAPL We need to know #IsSheWithUs pic.twitter.com/jQybCWJCeK