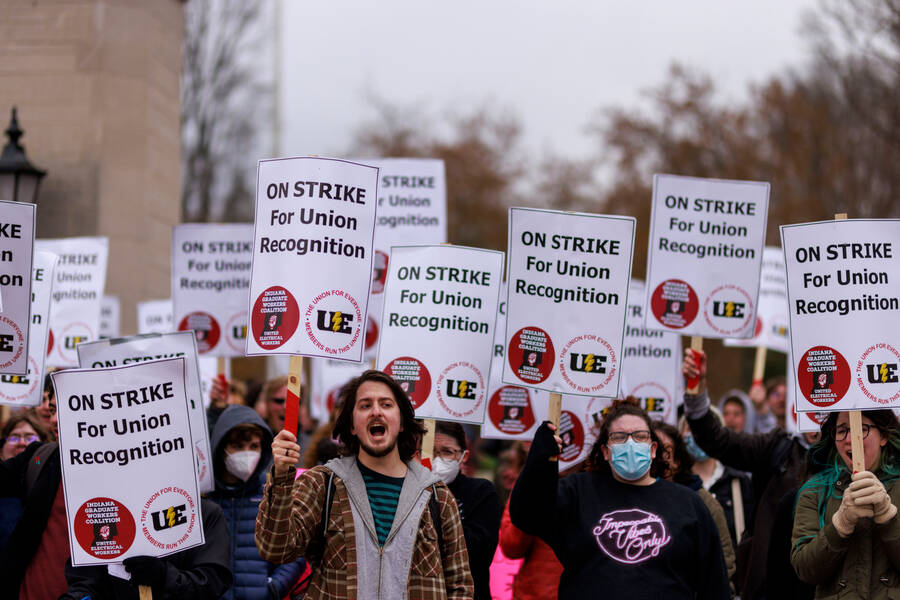 Damning Report Shows Unions Have Plenty Of Money To Organize

Above Photo: We could have much more of this, if we wanted to. Jeremy Hogan / SOPA Images/LightRocket Via Getty Images.

They Just Don’t Spend It.

For The Past Decade, Organized Labor Has Gotten Richer Even As It Watched Its Membership Decline.

Many people who are passionate about the labor movement, myself included, have long had the vague but haunting sense that the most powerful institutions in the union world are not doing enough to stem the bleeding that has been sucking power from unions for decades. Well, there’s good news and bad news on that front. The bad news is: that sickening feeling was correct. The good news is: now we can put some numbers on it.

A new report from Chris Bohner, who runs the labor research firm Radish Research, has done an amazing service by systematically assembling thousands of financial records from unions over the past decade to assemble a report that gives the most comprehensive picture that I have ever seen of the current financial state of unions in America. Though unions are managed individually, anyone who believes in the necessity of a labor movement understands that all of organized labor must be able to act in concert to achieve broad social and economic goals — the most urgent of which is simply to give more people unions, since union density has now declined to barely over 10%.

The report shows that even as union density has continued its long decline over the past decade, the financial coffers of unions have expanded. That money, however, has not been used to do the organizing necessary to prevent all of those unions from shrinking. Instead, the report paints a picture of the union world as an exclusive club sitting in a walled garden, watching its bank accounts swell even as all of those workers on the outside who need its help are disappointed. Among the key findings:

These findings alone are a devastating indictment of the strategic approach of American unions. Labor has rightly bemoaned the broken state of labor law in our country, yet the act of concentrating its political and financial capital on electoral politics in a bid to reform those laws has resulted in no major wins in Congress, a decline in union membership and union density, and a big pile of money that is not being used to organize workers at the same time that tens of millions of workers say they want unions. The shockingly robust state of union finances is, in a way, a more troubling finding than its opposite would have been: at least if unions were broke, they would have an explanation for why their organizing staffs have been getting smaller instead of bigger. As it is, we are left with a picture of an insular institution that has utterly failed to look outside of itself and do what needs to be done to serve the nation’s working class.

Union leaders often dismiss this sort of analysis out of hand by saying that an aggregate picture of the finances of organized labor is meaningless, since each union is autonomous and focused on its own specific membership. The idea of a broad general direction for labor as a whole, they say, is an illusion. That is true, and exactly the problem. We need a movement that is moving in a coherent direction, towards progress. Instead we have a constellation of separate little groups all disclaiming responsibility for the big picture. The failure of anyone — large union presidents, the AFL-CIO, or anyone else — to unify all of these points of lights and enable any real coordinated action towards mass organizing is at the heart of why inequality has been rising for my entire lifetime.

The $29.1 billion in net assets for unions, by the way, does not include the value of union pensions — which hold trillions of dollars in assets themselves. (Those pension assets could and should be strategically invested with the goal of strengthening the labor movement, but that is a topic for another day.) Those tens of billions, though, could accomplish a lot. Bohner, in his report, has a few suggestions: Hiring 20,000 new union organizers ($1.4 billion per year), supercharging spending on strike benefits ($1 billion per year), and funding “a new $3 billion entity (or entities) that could engage in riskier civil disobedience activities, like illegal strikes, secondary boycott activities, or defying restrictive court injunctions on picketing and protest.” One can quibble over the specific numbers, but these are all, frankly, very good ideas. We must enable vastly more union organizing; we must enable more strikes; and we must be able to take militant labor actions that fall outside the law, so long as the law is designed to handcuff labor. These things are not pipe dreams — they are all, as this report details, financially possible. So what is lacking? Leaders to make them happen.

A union organizer once told me, “I want a labor movement that bounces its last check by investing in organizing.” That is the mentality we need. And, we now know, much, much more is within our grasp. The question is what it will take to shake the union world’s institutions out of their happy, well-funded stupor.