Dangerous US Military Presence In Poland And Eastern Europe

Above photo: More US troops arrive in Poland – they are told that their mission is to stop Russia’s takeover of Eastern Europe from Organizing Notes.

Washington is upping the ante on Moscow.  The message appears to be ‘surrender to western capital or we will continue to militarily encircle your nation’.  A new and deadly arms race that could easily lead to a shooting war is underway with the US leading the pack.

The US has chosen Poland as the perfect location to sharpen the tip of the Pentagon’s spear.

The US already has roughly 4,000 troops in Poland. Warsaw has signed an agreement with Washington that provides for setting up storage of Pentagon heavy military equipment in its territory.  The Polish side provides the land and the US-NATO are supplying the military hardware that is being deposited at an air base in Laska, the ground troops training center in Drawsko Pomorskie, as well as military complexes in Skwierzyna, Ciechanów and Choszczno.

Map showing NATO and US military presence in Poland

A recent report indicates the US intends to remove 9,500 troops from Germany in the months ahead, with at least 1,000 of the personnel going to Poland.  The right-wing Polish government signed an agreement last year with Washington for a modest troop boost and has offered to pay for more infrastructure to host American troops – once offering $2 billion to help pay for a big permanent US base inside their nation. 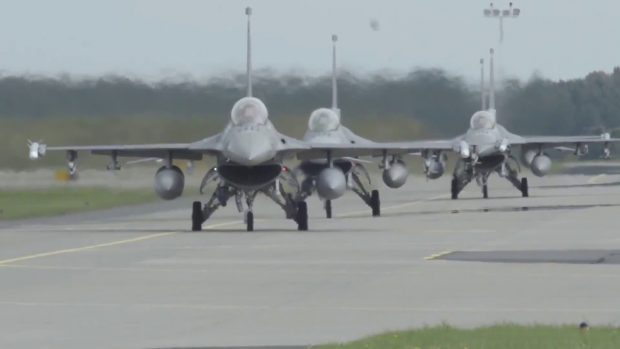 Some NATO members see these actions as unnecessarily provocative. Moscow has repeatedly objected to this escalation in Eastern Europe saying that NATO is an aggressor and threatens Russian sovereignty.

US-NATO respond that increasing the logistics and transportation capabilities in Eastern Europe allows the alliance (always looking for enemies in order to justify its existence) to increase the speed of movement of NATO forces toward Russia.

The National Guard has partnership programs with virtually all Eastern European nations. The National Guard rotates their US-based troops in and out of these countries allowing the Pentagon to claim that ‘permanent’ troop levels in the region are small.

The US agenda already includes a rotational Army armored brigade, a US-led multinational NATO battle group positioned near the Russian territory of Kaliningrad and an Air Force detachment at Lask. The American Navy also has a contingent of sailors in the northern Polish town of Redzikowo, where work continues on a missile ‘defense’ site that integrates with systems in Romania and at sea on Aegis destroyers.

Outside Powidz, one of the largest airfields in Europe, a swath of forest has been cleared to make way for a NATO-funded $260 million storage site for tanks and other US combat vehicles. 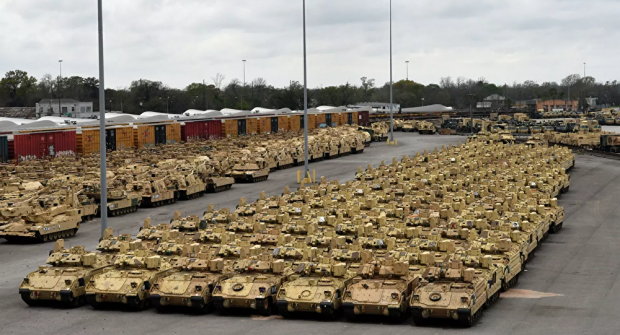 The US anti-missile site close to Poland’s northern Baltic Sea coast, when complete this year, will be part of a system that stretches from Greenland to the Azores. The Missile Defense Agency, a unit of the Pentagon, is overseeing installation of the Lockheed Martin built ground-based ‘Aegis Ashore’ ballistic missile system. Included in this ‘Aegis Ashore’ program, the US switched on a similar $800 million site in Romania in May 2016.

From the Romanian and Polish ‘Aegis Ashore’ missile launch facilities the US could either launch Standard Missile-3 (SM-3) interceptors (to pick off Russia’s retaliatory response after a Pentagon first-strike attack) or nuclear-capable cruise missiles that could hit Moscow in 10 minutes time. 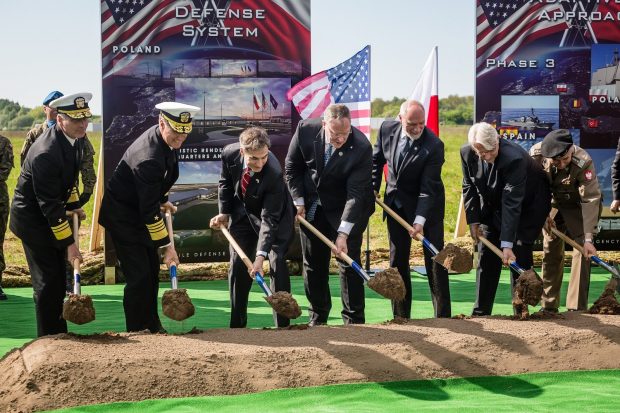 Mateusz Piskorski, head of the Polish party Zmiana claims that the US-Poland intergovernmental agreement on placement of US bases for heavy military equipment in Poland is a part of the US provocative strategy in the region.

“It is a part of the new aggressive confrontational policy of the United States in Central and Eastern Europe, the policy which is aimed at containing theoretical ‘Russian threat’ for these countries and which responds to the requests of the political elites of these countries which ask US authorities to place new military bases and infrastructure in the region,” Piskorski said.

“The agreement between the United States and Poland is one of several similar agreements which have been signed lately between the US and different Central and Eastern European countries, for instance, the same goes for the Baltic countries which will have the US military bases there,” Piskorski added.

“One must remember about the agreements between Russia and NATO made in 1997….which guarantee that no permanent military presence of US will be allowed on the territory of new member states of NATO, which means on the territory of the Eastern European countries. So this is a direct violation of international law, of the agreement of 1997,” Piskorski said.