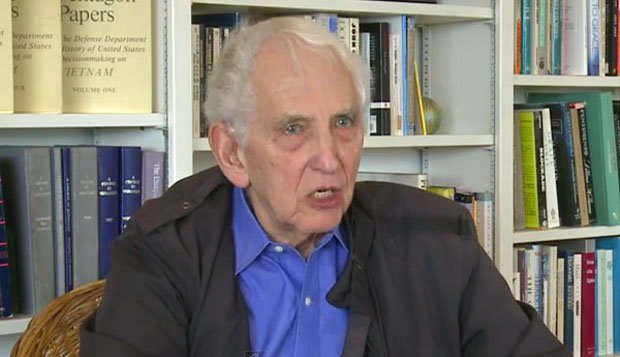 Daniel Ellsberg: Snowden Made Right Choice When He Fled U.S.

In my case, my authorized access in the Pentagon and the Rand Corp. to top-secret documents — which became known as the Pentagon Papers after I disclosed them — taught me that Congress and the American people had been lied to by successive presidentsand dragged into a hopelessly stalemated war that was illegitimate from the start.

Snowden’s dismay came through access to even more highly classified documents — some of which he has now selected to make public — originating in the National Security Agency (NSA). He found that he was working for a surveillance organization whose all-consuming intent, he told the Guardian’s Glenn Greenwald, was “on making every conversation and every form of behavior in the world known to them.”

It was, in effect, a global expansion of the Stasi, the Ministry for State Security in the Stalinist “German Democratic Republic,” whose goal was “to know everything.” But the cellphones, fiber-optic cables, personal computers and Internet traffic the NSA accesses did not exist in the Stasi’s heyday.As Snowden told the Guardian, “This country is worth dying for.” And, if necessary, going to prison for — for life.But Snowden’s contribution to the noble cause of restoring the First, Fourth and Fifth amendments to the Constitution is in his documents. It depends in no way on his reputation or estimates of his character or motives — still less, on his presence in a courtroom arguing the current charges, or his living the rest of his life in prison. Nothing worthwhile would be served, in my opinion, by Snowden voluntarily surrendering to U.S. authorities given the current state of the law.

I hope that he finds a haven, as safe as possible from kidnapping or assassination by U.S. Special Operations forces, preferably where he can speak freely.

What he has given us is our best chance — if we respond to his information and his challenge — to rescue ourselves from out-of-control surveillance that shifts all practical power to the executive branch and its intelligence agencies: a United Stasi of America.