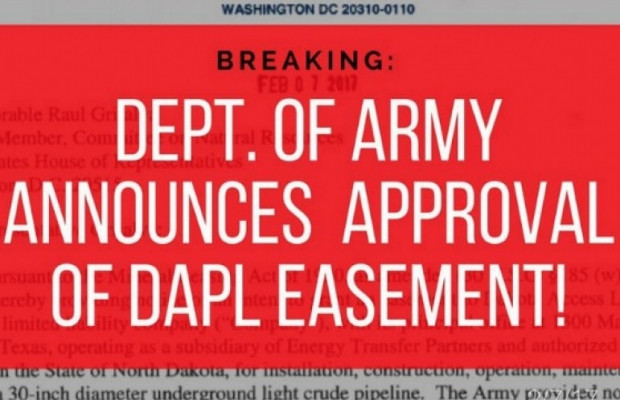 Above Photo: The approval is a massive blow to DAPL opponents. (Photo: @IENearth/Twitter)

Unless there is an injunction, construction could begin in 24 hours

The U.S. Army Corps of Engineers on Tuesday said it has notified Congress that it plans to grant Energy Transfer Partners the final easement to build the Dakota Access Pipeline (DAPL).

The approval is a massive blow to DAPL opponents, who have waged a months-long resistance to the pipeline on the grounds that it violates Indigenous treaty rights and threatens access to clean water.

Trump’s order comes as reversal to actions taken by the Obama administration, which ordered the corps to conduct a full environmental review of the 1,172-mile pipeline before allowing construction to continue.

Erich Pica, president of Friends of the Earth, responded by stating, “Trump’s reversal of the previous commitment to conduct an Environmental Impact Statement on the Dakota Access Pipeline is as sickening as it is predictable.

“The Standing Rock Sioux and Indigenous American peoples who have fought for their sacred tribal land and water rights deserve human dignity and a healthy future,” Pica added. “We stand behind them in the #NoDAPL fight and will put financial pressure on the banks financing this destructive pipeline project. The people’s resistance to keep fossil fuels in the ground will not disappear.”

Meanwhile, Dallas Goldtooth, an organizer with the Indigenous Environmental Network, posted this reaction to the corps’ decision via Facebook live:

According to CNBC, the move is “almost certain to spark a legal battle and could lead to clashes at camps near Cannon Ball, North Dakota, where hundreds of protesters are still camped out in opposition to the project.”

The Standing Rock Sioux tribe said last week it would “pursue legal action” if the easement was granted.

The corps said it would terminate its plans to release the environmental impact statement.

Climate activist Brad Johnson wrote on Twitter that the corps is only giving the Senate 24 hours notice on the DAPL easement, rather than the required 14 days—which means that unless there is an injunction, construction will begin in 24 hours.

Army Corps has given the US Senate only 24 hour notice on DAPL easement, instead of required 14-day notice. #NoDAPL

“By putting corporate polluter profits above the people’s well-being, future, and access to clean, safe drinking water, Donald Trump is once again showing where his priorities lie,” said Sierra Club executive director Michael Brune. “America’s president should serve the people—not Big Oil—and the movement that has captured the nation’s attention will continue to mobilize against Trump’s anti-democratic agenda.”

“Donald Trump’s dangerous and legally questionable attempt to ignore the environmental review will be met with fierce resistance by a broad coalition of 300 tribes and millions of Americans in the court and on the streets,” Brune said.