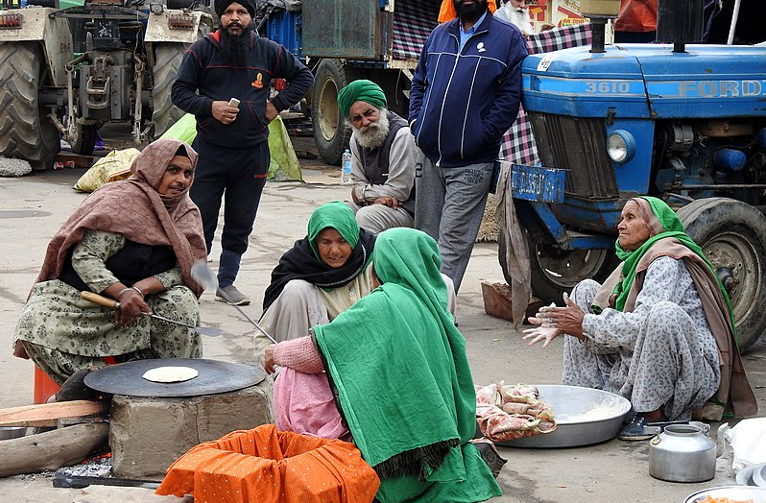 Dare To Win: Lessons From The Indian Farmers Movement

The Farmers Movement in India has inspired millions around the world who are fighting for justice, democracy and solidarity. The farmers held their ground in the face of threats, intimidation and relentless propaganda, and forced the Modi government to repeal the farm bills. This was one of the most spectacular victories of ordinary people against the combined assault of corporate power and the state, showing that determined struggle can defeat the mightiest of forces.

On 19 November 2021 the Government of India announced that three highly contentious Farm Bills introduced in June 2020 would be repealed. The Government introduced the laws in the early months of the Covid-19 crisis, when opportunities for public and democratic discussion were extremely limited. The laws, an ostensible reaction to the long-term and well-documented agrarian crisis in India, were introduced without consultation and bypassing due parliamentary procedures. However, Indian farmers argued the laws would undermine their livelihoods by stripping away price supports, eliminating the (extremely limited) protections that remain after decades of neoliberal reforms, and strengthening corporate control of agriculture. The passage of these laws tipped off a mass protest movement of an incredible scale. Nearly 700 farmers died during this remarkable protest, while thousands more were arrested.

The mobilizations have lighted a beacon of hope for anti-authoritarian struggles around the world and shown the critical importance of solidarity and movement building that forges alliances and unites rural and urban people across diverse different religions, regions, castes, genders, and ethnicities. It represents a major victory on a key political issue. At the same time, India’s agricultural sector is still in crisis. Every year tens of thousands of farmers and agricultural workers commit suicide, more than 50% of agricultural households are in debt, and small farmers are bearing the heaviest burdens in the fight against increasingly powerful corporations.

In this context, Breakfree and the Food Sovereignty and Resource Justice Cluster of the Asia-Europe People’s Forum, an interregional network of progressive social movements, co-organized a webinar with key figures from Indian and global farmers’ movements to better understand the remarkable victory and the factors that lead to it, and to begin to explore the question “what is (still) to be done?”. The full recording of the webinar is available below, but this article provides a short overview of some key points.

President of the Krantikari Kisan Union

The 2020 movement is a continuation of the previous movements in defense of a minimum support price of agricultural products and of freedom from indebtedness, which had led, in 2017, to the formation of the All India Kisan Sangharsh Coordination Committee (AIKSCC). In this context, farmers immediately realized that the farming bills approved in September 2020 would pave the way for further corporate (farm)land grabbing. Mobilizations erupted first in Northern states such as Punjab and Haryana, involving the whole population, and by the end of October 2020 a massive march towards Delhi was underway. On 7 November, farmer organizations formed the Samyukt Kisan Morcha (SKM, or ‘United Farmers Front’).

Darshan Pal explained, after blocking the capital, farmer organizations from all around the country engaged in intense negotiations with the government. The latter refused to withdraw the laws, and intensified its repression and campaigns to delegitimize the movement. However, farmers remained united, despite all social, geographical, caste and religious differences among them, and ultimately showed that it is possible to stand against the Government. Throughout this whole process, the movement developed a collective wisdom that can guide future struggles.

National president of all India Kisan Sabha, the farmers union, affiliated with the Indian Communist Party- of India (Marxist)

India has been in an agrarian crisis for decades already, aggravated by neoliberal policies since the 1990s. From 1995-2020, more than 400,000 farmers have been forced to commit suicide due to indebtedness. Of these 100,000 killed themselves in the last 7 years. The laws approved would only worsen this scenario: they were not only anti-farmer, but anti-people in general and pro-corporate. Had they been implemented they would have brought about the end of the “minimum support price” and of the entire public distribution system, on which 810 million people depend.

Ashok Dhawale identified several key factors in the triumph of the movement: its outstanding unity, mediated by the SKM; the active support of central trade unions and the working class in general; and its secularity, bringing together all castes, languages and religions. It faced tremendous challenges, from the Covid-19 pandemic to barbaric state repression, which murdered 715 farmers (15 of them with the direct involvement of a state minister), and intense defamation. Despite all that, the struggle remained completely peaceful, true to non-violence. Most importantly, their struggle was openly directed against corporations, neoliberalism, imperialism, the government. It has already managed to impact state elections and the SKM is pushing to raise the issue at all levels. In general, the movement gave much-needed inspiration to the Indian people, showing that huge struggles can lead to victories. We shall win, if we dare to win.

Morgan Ody emphasized that La Via Campesina members around the world have been profoundly impressed by the farmers’ movement in India. All farmer movements are about survival in face of capitalism, which is essentially about corporate capture — helped by institutions like the WTO — about accumulating wealth against the people. Yet, movements do win many struggles, even against such powerful opponents. For decades, La Via Campesina and allied movements have been advancing Food Sovereignty as an alternative to corporate-controlled and profit-driven food systems, and this idea has gained ground and helped to mobilize millions of people to defend democratically controlled food systems.

However, a lot of endurance and tenacity is necessary. As shown by the Indian struggle, alliances are also key, particularly with environmental movements. We also need a diversity of strategies, from petitions, demonstrations, and legal actions to civil disobedience. The main questions to the movement in India are: how do we make this victory a stepping stone to stop liberalization and market deregulation?; how do we ensure that we take advantage of this struggle in the international level to strengthen food sovereignty? We need to connect our local, national and international struggles to face corporate interests and win.

The 2020–2021 Indian farmers’ protest is another example in India’s long history of collaboration between rural and urban working peoples. Amarjeet Kaur highlighted some key lessons. The mobilization was marked by: wide unity across many different kinds of working people including workers and peasants; a peaceful response; continual openness to dialogue with government and others; remarkable support from artists and musicians that turned the occupations into sites of cultural creation; transparency and collective, democratic decision-making that enabled unified messages and strategies; centering women and womens’ struggles not only discursively but in practice and in organizing; engaging people from all age groups; strategically invoking the history of liberation and social justice struggles in India including through days of action celebrating key historical reformers, helping to win wider public support; a core message that was simple, clear, and could be understood by anyone; the provision of food and other daily essentials not only to supporters but to everyone in and around the camps; a very high level of accountability and transparency in the use of funds; and an extremely robust communication and social media wing that helped to counter mainstream media accounts and shape international media coverage.

The unity of the struggle did not come about automatically. It was the result of long-term relationship building, historically shared struggles, and concrete work to identify shared and common agendas including anti-corporate, anti-privatization, and pro-democracy positions. Government repression and neoliberalism threaten both peasants and workers. Although an enormous victory has been won, there is much more still to be done. The many lessons from this movement can help to strengthen and guide future struggles, building towards a democratic and egalitarian society for all working people.

The victory of the peasant movement in India comes after decades of state and market threats. Although the farmers’ movement has recently succeeded, rural emancipation is not yet a reality, and to achieve it, existing agricultural challenges should be addressed. Hashim bin Rashid sees these challenges as falling into three main groups. First, the unequal distribution of benefits from agricultural markets. Historically, the peasant movement has focused on the right to land, which is still relevant today. According to bin Rashid, the farmers’ movement should acknowledge that rural markets are essential spaces for rural politics, given their key position as mediators of agrarian surpluses. Second, the need to curb unsustainable agriculture. Recently, the ecological consequences of industrial agriculture, in terms of destruction of land and livelihoods, have begun to be recognized. In this sense, future agricultural practices should be sustainable and care for the land. Lastly, the issue of not having access to or ownership of the land. In recent times, South Asian movements are re-raising the issue of landlessness and discussing urban-rural labor issues from a rural perspective. Future agrarian debates should consider both the right to land and the right to decent work. The peasant movement has proven its strength, confronting an authoritarian regime and building grassroots power. The task ahead of it now is to define a coherent and situated emancipatory vision that addresses the interlinked challenges of markets, ecology, and land.

The farmer’s movement in India represented a revolt against the inequality produced by neoliberalism, capitalism and imperialism in the Global South. These social ills, exacerbated by the COVID-19 pandemic, are part of a single system that has to be fought by all sections of society together. To continue, the movement must look for alternatives for repressed and marginalized working people both urban and rural. This means building broader movements and continuing cooperation between the peasant movements, trade unions, social movements and all other sectors of Indian society. It also means continuing to articulate a shared vision of an emancipatory future for all, against corporate-driven, authoritarian, ecologically destructive neoliberal capitalist regimes. Many of the details of this vision, and what it will look like for different kinds of working people facing different challenges in different contexts and situations, remains to be seen. But the unity, democracy, and power of the farmers’ mobilizations will help to light the way.