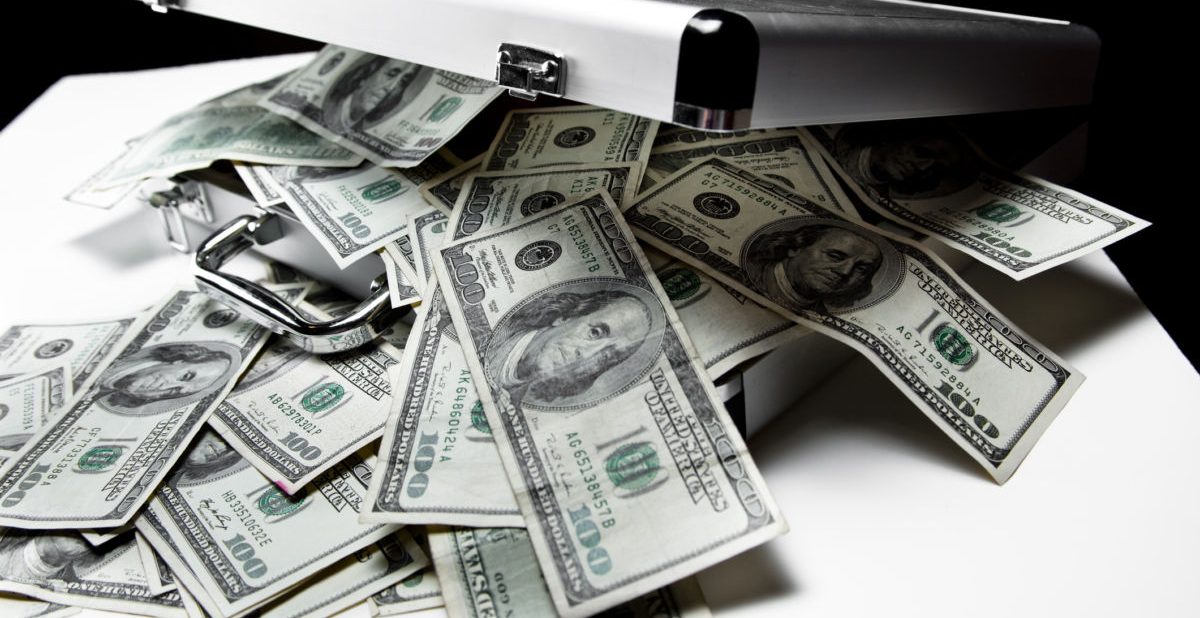 Dark Money — Coming From A Shell Company Near You

So-called “dark money” contributions come from a diverse cross-section of the American landscape. Suburbs, big cities and even small towns are home to corporations created primarily to conceal the true source of money flowing to super PACs that spend millions of dollars to influence elections.

One dark money trail leads to Carter Lake, Iowa, population 3,785. Technically, the town is on the Nebraska side of the Missouri River in Omaha, and its horseshoe-shaped lake was once an oxbow bend of the river itself. Flooding changed the course of the river in 1897 leaving a two-mile square piece of Iowa forever marooned in Nebraska. It has a local reputation as a lower-income town of small houses, mobile homes, airport hotels, a few industrial businesses and a large abstract steel sculpture called “Tri-Point Column” by the late sculptor Rod Kagan sitting alone in a field on Abbott Drive.

The LLC’s address, 200 Owen Parkway Circle, is the same as Lone Mountain Truck Leasing, and its registered agent in Iowa is Andy Lucht, CFO of the truck company. The owner is Wayne Hoovestol, a midwest businessman who owns several farming and trucking-related businesses, including Hoovestol, Inc, many of which use the same Iowa address.

Hoovestol and his wife Monica aren’t quite megadonors, but they have given $118,320 to Republican candidates and groups and just $1,050 to Democrats since 2002, according to data from the Center for Responsive Politics. Their largest recipient is Rep. Steve King (R-Iowa) with $25,700 in contributions.

Hoovestol and Lucht did not respond to phone messages inquiring about DRT. It is unclear how DRT is funded and what the company does, outside of giving political contributions.

Though the source of DRT’s funding is muddy, it appears to have a relatively obvious link to Hoovestol’s businesses. Not all so-called shell corporations are as easy to trace.

The offices are home to a number of investment and banking firms and, according to FEC filings, they’re also home to an unknown corporation called DPUS LLC that contributed $100,000 to the liberal Senate Majority PAC in the midst of the heated Senate election between Democrat Kyrsten Sinema and Republican Martha McSally.

DPUS was incorporated in Delaware in July 2012 and immediately got to work funneling money into Arizona politics, giving a total of $175,000 to a brand new super PAC called Restoring Arizona’s Integrity in 2012. The company has no website or internet presence and doesn’t appear to serve any purpose other than giving to political groups.

Restoring Arizona’s Integrity made all of its independent expenditures — $59,796 — in the Arizona 9th Congressional District Democratic primary to oppose Andrei Cherny, who would go on to lose to Sinema during her first successful bid for the House.

The group aired multiple television ads to attack Cherny, comparing him to Newt Gingrich in one ad and labeling him a Washington, D.C. insider in another. After Sinema won the primary, the super PAC transferred $100,000 to House Majority PAC, which would spend $494,438 to oppose Sinema’s Republican opponent Vernon Parker.

In 2014, DPUS gave another $55,000 to the super PAC, which swiftly transferred $50,000 to the Democratic Governors Association in the midst of the Arizona gubernatorial election between Doug Ducey and Fred DuVal.

Prior to 2018, DPUS listed in FEC filings the address of its Wilmington, Delaware incorporation agent, Corporation Trust Center at 1209 North Orange Street. Despite being located in a drab single-story office building, Corporation Trust Center is the go-to registered agent for companies that don’t want to be found, serving as the registered agent address for roughly 300,000 businesses as of 2018 including Apple, WalMart and Coca-Cola.

But DPUS may have slipped up with its 2018 contribution, forgoing the Delaware address and listing its address as 2525 E Camelback Rd Ste 850. That’s the same address as private investment firm Najafi Companies, owned and operated by Jahm Najafi, a longtime Phoenix investor and partial owner of the Phoenix Suns.

A similar address isn’t the only piece of circumstantial evidence that appears to link Najafi to the apparent shell company.

Najafi and his brother Francis Najafi — founder of 30-year-old Phoenix investment firm Pivotal Group — are highly successful Iranian-American investors who happen to be politically active. But they don’t appear to be on the same page politically.

Francis is much more prolific — and conservative. He and his wife Dionne have given a total of $590,933 to Republican candidates and causes and $136,600 to Democratic ones. In 2015, Huffington Postreported that Francis may have used a shell company called Tread Standard LLC to transfer $150,000 to a pro-Jeb Bush super PAC.

DPUS didn’t limit its political giving to federal elections. Between 2015 and 2016, the group gave a total of $4,000 to successful Washington Lieutenant Governor candidate Cyrus Habib, the first Iranian-American to win a statewide election. Pivotal group gave $3,800.

Najafi Companies did not respond to a request for comment on any potential connection with DPUS.

Hundreds of miles and several national parks north of Phoenix, a general business with the name National Vista, Inc. was formed in June 2018 using the address of a registered agent in Boise, Idaho. The business wasted little time jumping into politics, giving $400,000 to the Mitch McConnell-aligned Senate Leadership Fund (SLF) on Oct. 17, 2018.

The funders behind National Vista did a good job concealing their identities, using the address of the company’s registered agent Morris Bower & Haws for all of its filings, including its FEC filing. The law firm, located in a suburban office building with other law firms, a financial services firm and a teak furniture store, did not respond to a request for comment.

The opaque quality of a registered agent address makes the real source of the dark money very difficult to track. However, National Vista did something of note besides bankrolling a super PAC. The only link to National Vista on the internet is an obscure document that highlights a widely cited study linking national brand cleaning products — such as Clorox and Lysol — to lung damage.

The document is copyrighted “2018 National Vista, Inc.” Some of the wording in it exactly mirrors that used in a press release released in February by Melaleuca, an Idaho-based company that sells its own cleaning products along with an arsenal of health-related products. (Melaleuca is a genus of trees from which tea tree oil is derived.)

Both releases use identical wording in several instances and note the exact same findings. At the end of the National Vista document, it simply states: “If you haven’t done so already, now is the time to rid your home of the dangerous national cleaning products that contain so many harmful chemicals.”

Melaleuca sells its products through a multi-level marketing structure. Unlike other MLM companies, products are sold online and shipped directly to the consumer. The company asserts that its products are healthier and more environmentally-friendly than national brands.

One month before National Vista’s incorporation, Melaleuca made its own $400,000 contribution to SLF, along with a separate $400,000 to Congressional Leadership Fund (CLF) on the same date. The company has given $2.5 million to GOP outside groups since it began ramping up its political spending in 2011. It also doesn’t mind giving identical contributions to the same group in multiple increments, as various branches of the company gave a total of four $250,000 contributions to anti-Obama super PAC Restore Our Future in 2011.

Melaleuca is run by billionaire GOP megadonor Frank VanderSloot, who is reported to be the richest person in Idaho at an estimated net worth of $3.4 billion, according to Forbes. VanderSloot was national finance co-chair for fellow Mormon Mitt Romney’s 2012 presidential race. Like Education Secretary Betsy DeVos, of the Amway multi-level marketing fortune, VanderSloot is a supporter of charter schools and spent $2 million to found the American Heritage Charter School in his home, Idaho Falls.

Excluding contributions from Melaleuca to major super PACs, VanderSloot and his wife Belinda give plenty of money on their own, contributing nearly $3.5 million to GOP candidates and groups since 1992.

A Melaleuca representative expressed an interest in making a comment but did not do so by press time on Tuesday.

Are These Contributions Legal?

By federal law, it is illegal to make political contributions in the name of someone else, and straw donors making contributions through shell companies fall under that prohibition. The use of shell company contributions to super PACs is a growing trend that has captured the attention of government watchdogs.

“Disclosure of who is spending money in elections is a vital component of our campaign finance system, but transparency is undermined when a wealthy donor launders their contribution through a shell company,” said Brendan Fischer, director of federal reform at the nonpartisan Campaign Legal Center.

Some of these LLCs, such as DRT, LLC, are easier to track than others. But it doesn’t make the money any less “dark,” as there is no way to know the real source of the funds.

“Just because you can suspect an LLC has connections to company, it doesn’t really tell you anything about the source of the money,” Fischer said. “It might’ve come from the company, the company’s owner, or it might’ve come from another individual altogether. The purpose of disclosure is to allow people to know immediately upon looking at an FEC report who the contributors are. It shouldn’t require pulling records from other states to reveal a possible connection to another company.”

Not all apparent shell companies are necessarily dark money. For example, BK2 Holdings a Princeton Junction, New Jersey-based company that gave $500,000 to SLF in 2017, is clearly linked to billionaire GOP donor Bruce Kovner in several ways.

For one, it uses his initials “BK,” just as Suzanne Kovner’s company uses the initials “SK.” Its address is the same as Kovner’s firm Caxton Alternative Management. And in a $244,200 contribution to Paul Ryan’s joint fundraising committee, BK2 Holdings is listed as a partnership that Kovner owns, though such a partnership attribution is not attached to the BK2 contribution to SLF.

In this case, the source of the money is Kovner, but it takes some digging to figure that out, and BK2’s contributions aren’t always disclosed as such.

Under the FEC’s current makeup, it’s debatable whether the agency would classify some of the above political contributors as shell companies at all. The commission could rule that National Vista, in producing a document about the hazards of national cleaners, shows that it has a purpose besides acting as a conduit to funnel anonymous contributions.

Still, when Campaign Legal Center sent a complaint to the FEC about contributions to conservative super PAC DefendArizona from two apparent shell companies — Highway 76, LLC and Blue Magnolia Investments, LLC — it made an impact.