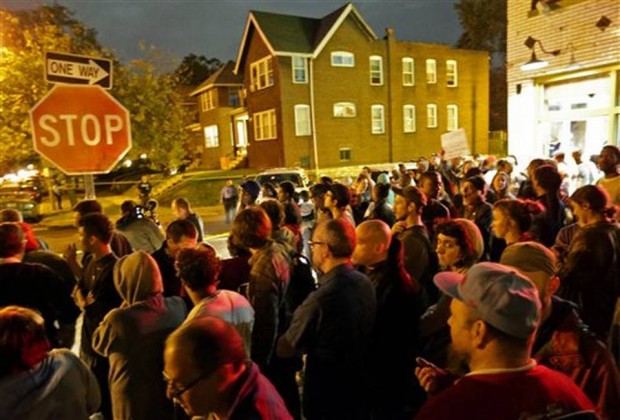 Davey D On Newest Murder By Police In St. Louis

Above photo: By David Carson/AP

Wanna give folks deeper understanding as to some of the dynamics that were in play around the tragic shooting of 18 year old Vonderrick Myers Jr by an off duty police officer.. He was shot 17 times. After speaking yesterday with local activists and organizers Bgyrl ForLife and Tef Poe there several things folks should know…

First the area where Myers was shot is in South St Louis in section called Shaw. The area is a mixed area with a large population of poor Blacks and poor whites.. Its also a neighborhood that is undergoing gentrification. A hallmark of that gentrification is the use of police in some of the gentrified and more affluent areas.Those police work for a firm until recently was known as Hi-Tech Security. They are now called GCI Security.

Poe noted that the officer that shot Myers was working for a wealthy gentrified neighborhood called Flora Place. Residents pay off duty police who serve as guards literally making the neighborhoods ‘gated’ even though the blocks are public.

The officer in question had left his post and was in another area when he spotted Myers with his friends. This where things get sketchy. By all accounts Myers was not committing any crime. There were no calls about him and even though it was legal for him to be in any part of town, he wasn’t near Flora Place where St Louis police work as private guards who are paid for by residents.

According to St Louis police the officer saw Myers and proceeded to conduct what they described as a ‘pedestrian check.’ The officer claims he saw Myers with a gun.. Witnesses say he had a sandwich. Videos show he had just purchased a sandwich. The clerk in the store says he didn’t believe Myers had a gun..

Police say the officer approached Myers and he and his friends scattered. The officer who was in uniform although off duty and under the employment by Hi Tech gave chase, he claims Myers drew a gun and shot at him.. That account is disputed.

What comes into question is why was he not in the wealthy area he was supposed to be patrolling? When this question was raised to Chief Sam Dotson he directed folks to ask GCI security. If this officer was in the wrong who is responsible, the city of St Louis or a private company?

I had noted a while back that in the years to come we would be faced with a private companies hiring and employing police who can arrest, detain and shot to kill with the backing of the state. The only problem is those officers would be following orders and fulfilling the agenda of private companies.

The privatization of police is troublesome. We saw this play out during the Occupy Movement when Wall Street firms like JP Morgan paid NYPD and were overseeing the brutalizing actions of white shirted officers who while NYPD officers worked for Wall Street.

The question all of us should be asking is what if the police observe their employer or people connected to that employer breaking the law? Do they turn a blind eye? Do they uphold the law no matter who is paying the check? Do they enable the employer to break the law? What happens if a citizen who is not paying these extra fees is violated by someone employing off duty police?

We saw this conflict emerge and come into question several years ago when it was revealed that music mogul Suge Knight while running Death Row Records had off duty police working for him as private security. There were claims that while those officers guarded Suge and locked down the office, there were lots of folks who were beaten and brutalized by Suge and his people. No arrests or police reports were ever filed.. Some of those officers were eventually disciplined, but in St Louis things are different..

In recent days we seen the actions of public-private police officers come into question around the domestic violence case of San Francisco 49er Ray McDonald. For those who don’t know McDonald was accused of beating his pregnant girlfriend. She called police. When police arrived they were surprised to see another police officer already at the house. That officer was Sgt. Shawn Pritchard who was off duty and working for the San Francisco 49ers.

I want folks to sit back and think about that for a minute.. Here we have a woman who says she was beaten. She calls police. The police arrive. The only problem is the police that arrive work for the person who harmed you. In the case the first officer on the scene worked for the 49ers and represented the interests of Ray McDonald.. What was said? Not said? Was the victim intimidated? Was evidence hidden, destroyed? Was McDonald prepped by his employee as to what he should say or not say? Read about that HERE–http://cbsloc.al/1C0Q0GS

St Louis is ground zero for this type of Public-Private police hybrid.. According to the St Louis Dispatch this practice has flourished in recent years with the blessing of the police department and city government. Wealthy communities upset with a shrunken police department have gone all out, pay annual fees through a third party vendor like GCI get a fleet of public police who are privatized. Read about that HERE–>http://bit.ly/1vb5eKI

In our discussion both Bgyrl and Tef Poe noted what I brought to light in my last post about all these recent cases (6 in the past few months) of folks going to jail over traffic tickets and winding up dead, disappeared or seriously harmed while in police custody. This has been on many people’s minds, hence the name of the game is to take evasive action when seeing them. Any encounter can be deadly especially if you have a record which was the case with Myers.

Tef Poe brought up another key point. While off duty police who are required to wear their uniforms, the question raised was that officer who was not in his assigned area in his full uniform. In other words did Myers know he was a cop or someone with a hostile attitude? Why and how did this officer encounter Myers is the question everyone wants answered. Poe thinks the actions taken by the officer were deliberate and unprovoked…