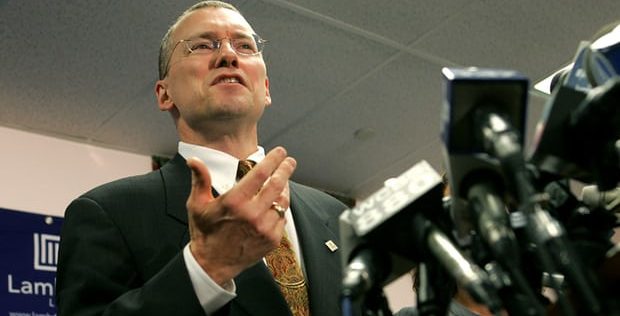 Above:David Buckel in 2006. Photograph by Jeff Zelevansky for Reuters

David Buckel, a nationally known advocate for gay rights and the environment died Saturday in self-immolation suicide in a wake-up call to save the planet.

Buckel was 60 years old. His body was discovered shortly after sunrise at 6:40 a.m when firefighters responded to the fire. Buckel lived a life in service to social and enviornmental justice. Even in his death he sought to serve others.

The NY Daily News reports he left two hand written suicide notes in a shopping cart nearby the blackened circle of burned grass. The first was a short apology where he wrote “I am David Buckel and I just killed myself by fire as a protest suicide. I apologize to you for the mess.”

The second longer note explained why he doused himself in “fossil fuel” before starting the fatal fire as a metaphor for the destruction of the planet.

“Pollution ravages our planet, oozing inhabitability via air, soil, water and weather. Most humans on the planet now breathe air made unhealthy by fossil fuels, and many die early deaths as a result – my early death by fossil fuel reflects what we are doing to ourselves. . . A lifetime of service may best be preserved by giving a life . . . Honorable purpose in life invites honorable purchase in death.

“I hope it is an honorable death that might serve others.”

He also sent an email to the NY Times and other media outlets which was received at 5:55 a.m, where he discussed the difficulty of improving the world even for those who make vigorous efforts to do so.

The Times reports, “Privilege, he said, was derived from the suffering of others. ‘Many who drive their own lives to help others often realize that they do not change what causes the need for their help,’ Mr. Buckel  wrote, adding that donating to organizations was not enough.” Noting that he was privileged with “good health to the final moment,” Mr. Buckel said he wanted his death to lead to increased action.

The Independent reports, “As a lawyer, he had garnered praise for his role as the lead attorney in a lawsuit involving Brandon Teena, who was raped and murdered in Nebraska. His life and death were the subject of the Academy Award-winning 1999 indie film Boys Don’t Cry, which earned Hilary Swank an Oscar. Mr Buckel also spearheaded same-sex marriage cases in a number of states across the US.”

The Guardian reported, “Buckel also served as marriage project director at Lambda Legal, a national organisation that fights for LGBT rights, where he was the strategist behind same-sex marriage cases in New Jersey and Iowa.”

The Independent highlighted the comments of Susan Sommer, a former Lambda Legal attorney, who is now the general counsel for the Mayor’s Office of Criminal Justice in New York. Sommer described Mr Buckel as being “all about justice, but he was also all about what it means to be human.” She said “He was a very smart and methodical lawyer. He knew his craft and his trade, and was strategic in how to build the blocks toward a sweeping victory.”

The Lambda Legal Defense and Education Fund issued a statement from Camilla Taylor, Director of Constitutional Litigation and Acting Legal Director, which stated that Buckel’s death

“is a tremendous loss for our Lambda Legal family, but also for the entire movement for social justice.

David was an indefatigable attorney and advocate, and also a dedicated and loving friend to so many. He will be remembered for his kindness, devotion, and vision for justice.

Our hearts go out to all who knew David. He was a beautiful human being who was universally kind to everyone at Lambda Legal, committed to his clients, and devoted to our work.

David was a brilliant legal visionary.”