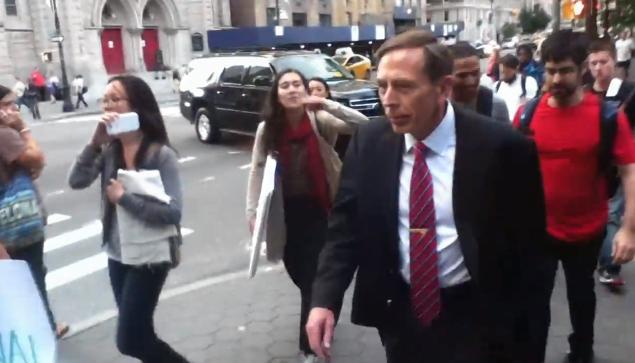 Above: Former CIA director David Petraeus was heckled by students as he walked through the streets of New York City.

Former CIA director David Petraeus was called ‘war criminal’ by students as he made his way to teach first class at City University of New York.

David Petraeus may be regretting taking a teaching position at the City University of New York system.

A video (see below) recently posted to YouTube shows the former director of the CIA and retired Army general being followed down the street on his way to his first class by a small, but passionate group of students.

It’s hard to make out a lot of what they’re saying, but there’s a lot of “war criminal!” And a general sense that they don’t like him very much.

This comes after Petraeus’ salary was lowered from a controversial $200,000 to just one dollar to teach a course at the honors college this fall titled “Are We on the Threshold of the North American Decade?”

Petraeus, who is largely credited with creating the counterinsurgency doctrine that turned the tide of the war in Iraq, is seeking to rehabilitate his image after resigning as director of the CIA after it was revealed he had an extra-marital affair with his biographer.

The whole experience must be a major culture shock for a retired four-star general. Generals enjoy a tremendous amount of special treatment, including personal chefs and valets, and are revered in the military community. Now, he’s being chased down the street and screamed at by a group of young students. One of whom, for some reason, had his belly exposed.

“Every class, David,” they yell, suggesting they will harrass him en route to every class this semester.

Petraeus, dressed smartly in a black suit and pink tie, has a great game face, and never acknowledges the group.