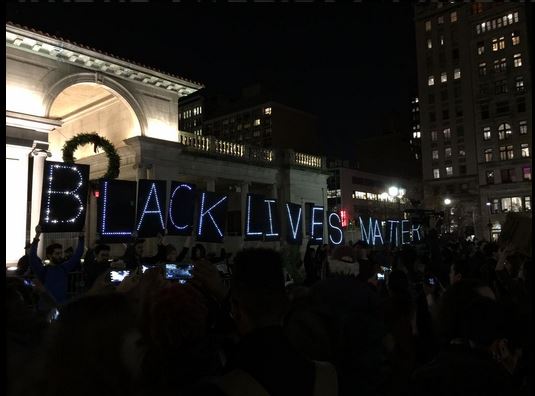 Day After Grand Jury Take To The Streets

Nationwide people will be taking to the streets in response to the grand jury decision in the Michael Brown case.  Find an action here.

Below is an announcement about protests in Washington, DC today, Tuesday, and every Monday at the US Department of Justice at 4 PM. The press release below puts forward specific urgent demands.

The Hands Up Coalition DC will peacefully assemble at the Justice Department every Monday at 4:00 PM, beginning December 1, 2014

Calls on Justice Department to Intervene and Adopt 6 Urgent Demands

November 24, 2014, Washington, D.C: The Washington-based Hands Up Coalition DC condemned the findings of the Ferguson Grand Jury that exonerated white Police Officer Darren Wilson for his August 9, 2014 shooting and killing of unarmed black teenager, Michael Brown. “The entire Grand Jury process was abused from day one in this case,” said coalition spokesperson, Dr. Marsha Coleman-Adebayo. “The system is anti-black, the policies are anti-black, shooting first and asking questions later is anti-black and slandering slain black men and women in choreographed leaks to the press after these people are dead and can no longer speak for themselves is anti-black.”

The Hands Up CoalitionDC calls on Attorney General Eric Holder to stand with the people of Ferguson—and every other community in the United States where white police routinely slaughter black citizens—and intervene in this case. Coleman-Adebayo continued, “The local DA in Missouri hid behind the Grand Jury so he wouldn’t have to face political consequences. It’s way past time for someone—whether the Attorney General, or the President, but someone—to declare a state of emergency: not because of what the citizens of Ferguson may do, but rather, based on the demonstrated assault the police department has waged against Ferguson citizens for decades.”

A communique released earlier this week by the young people of Ferguson made clear that they are not asking for Officer Wilson to be killed, or to be shot and left in the street, or to be lynched. Rather, they are asking that a white police officer, who shot an unarmed black teen in front of witnesses be brought to trial in a system that was created and is maintained daily to provide justice. They want Officer Wilson brought into that system—not shielded from it by the Grand Jury.

The Hands Up CoalitionDC will peacefully assemble at the Justice Department everyMonday at 4:00 PM, beginning December 1, 2014 to demand:

1) The demilitarization of local law enforcement across the country.

2) A comprehensive review of systemic abuses by local police departments, including publication of data on racially biased policing and the development of best practices.

A comprehensive review by the Department of Justice into systematic abuses by police departments and the development of specific use of force standards and accompanying recommendations for police training, community involvement and oversight strategies and standards for independent investigatory/disciplinary mechanisms when excessive force is used. These standards must include a Department of Justice review trigger when continued excessive use of force occurs. A comprehensive federal review of police departments’ data collection practices and the development of a new comprehensive data collection system that allows for annual reporting of data on the rates of stops, frisks, searches, summonses and arrests by race, age, and gender. These standards must also include a DOJ review trigger when departments continue discriminatory policing practices.

3) Repurposing of law enforcement funds to support community based alternatives to incarceration and the conditioning of DOJ funding on the ending of discriminatory policing and the adoption of DOJ Best Practices.

The repurposing of DOJ funds to create grants that the support and implementation community oversight mechanisms and community based alternatives to law enforcement and incarceration—including community boards/commissions, restorative justice practices, amnesty programs to clear open warrants, and know-your-rights-education conducted by community members.

The development of a DOJ policy to withhold funds from local police departments who engage in discriminatory policing practices and conditioning of federal grant funds on the adoption of recommended DOJ trainings, community involvement and oversight strategies, standards for use of force and for independent investigatory/disciplinary mechanisms.

4) Congressional hearings to investigating the criminalization of communities of color, racial profiling, police abuses and torture by law enforcement.

Congressional hearings to investigate the criminalization of communities of color and systemic law enforcement discriminatory profiling and other abuses, especially at the local level—including an examination of the systemic structures and institutional practices. The hearings will explore how to elevate the experiences and voices of those most impacted. Congressional hearings will allow for a continuation of the national discussion about police abuse and its underlying causes.

5) Support the passage of the End Racial Profiling Act.

Support for the passage of the End Racial Profiling Act (ERPA) codifying the prohibition of the use of profiling on the basis of race, ethnicity, national origin or religion by law enforcement agencies.

6) The Obama Administration develops, legislates and enacts a National Plan of Action for Racial Justice.

The development and enactment of a Plan of Action for Racial Justice by the Obama Administration. The ‘Plan’ should be a comprehensive in addressing persistent and ongoing forms of racial discrimination and disparities that exist in nearly every sphere of life, including: criminal justice, employment, housing, eduction, health, land/property, voting, poverty and immigration. The Plan would set concrete targets for achieving racial equality and reducing racial disparities and create new tools for holding government accountable to meeting targets.

The Hands Up CoalitionDC encourages everyone concerned about police brutality, mass incarceration and justice denied to black communities terrorized by modern day Slave Patrols disguised as police officers to join the national text network. Text “HANDSUP” to 90975. This will enroll people in a nationwide database to be engaged in future mobilizations.