Day of Action in Solidarity with the Palestinian Uprising: Tuesday, May 18

As Israel is continuing its massacres in Gaza, its attacks in Jerusalem and settler mob violence throughout occupied Palestine from the river to the sea, Palestinians have called for a general strike!

Samidoun Palestinian Prisoner Solidarity Network joins the call of Palestinians in Palestine and across the world for actions and mobilizations in support of the call for a general strike in Palestine on Tuesday, 18 May, and the escalation of organizing and resistance until liberation and return for Palestine.

This call has been supported by the Palestinian prisoners’ movement and popular movements, youth organizations, labor unions, political parties, and other mobilizations from the river to the sea inside occupied Palestine, and the call is expected to grow even further. As Palestinians are united with the #PalestineStrike, Samidoun calls on all labor movements, unions and syndicates around the world to support the Palestine Strike. Please share with us your endorsements, actions and solidarity statements so that we can publicize them widely.

Join in the call to action!

#PalestineStrike from the river to the sea! Day of Action in solidarity with the Palestinian uprising and general strike.

From across Palestine, we call on you to join our general strike and day of action on Tuesday, May 18. Launched from Jerusalem and extending to every village, city, and refugee camp across Palestine and at our borders with Lebanon, Syria, and Jordan, we call on your support in maintaining this moment of unprecedented popular resistance.The Israeli settler-colonial regime and military occupation has suffocated us and attempted to extinguish all possibility for the past 73 years. Now we demand our freedom — for the sake of the lives taken from us, for the countless injured, for those whose homes were destroyed, and for the thousands of our people arbitrarily imprisoned by the occupation.

As Jewish Israeli settler mobs and the Israeli state continue a campaign of violence against our people in Sheikh Jarrah and Gaza, we will continue our popular intifada until the liberation of our lands and people.

As Palestinian youth, we invite you across the international community to contribute to our general strike on May 18th by organizing actions in your cities and communities. We invite you to hold actions outside Israeli embassies and consulates in your region, but invite any gesture or action in solidarity with our continued struggle.

We will continue to strike, organize, and protest for as long as the occupation exists. Liberation is within our reach. 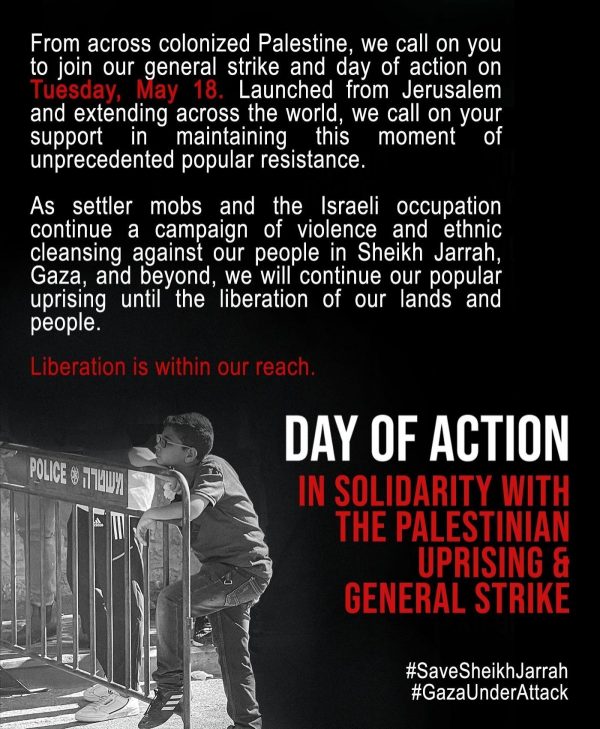 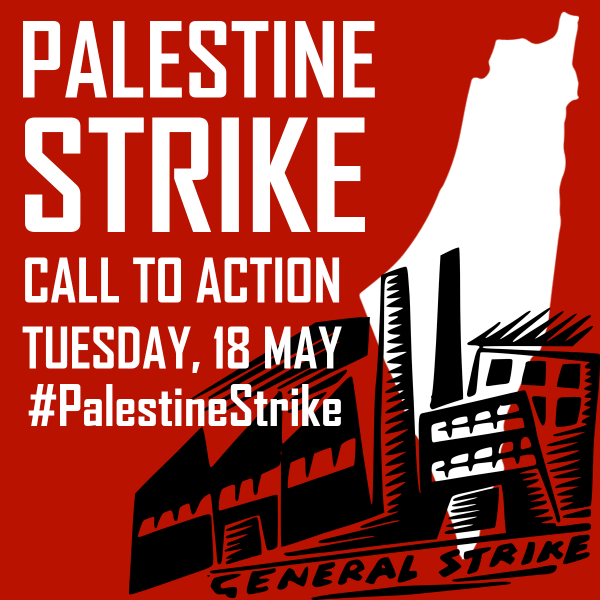 Protest at the Israeli Embassy or Consulate in Your Country!

Join the many protests taking place around the world — confront, isolate and besiege the Israeli embassy or consulate in your city or country of residence. Make it clear that the people are with Palestine! Send us your events at samidoun@samidoun.net.

Take to the streets: Organize a protest in solidarity with Palestine!

Hundreds of thousands – millions of people – around the world have marched and protested with Palestine, its people and its liberation over the past week. Your protest and organizing is also key to supporting this strike!  Take to the streets and join the actions on our full list of events, which is constantly being updated as new actions are announced! Organize your own if there is none in your area, and send us your events at samidoun@samidoun.net.

The international, Arab and Palestinian campaign to boycott Israel can play an important role at this critical time. Local boycott groups can protest and label Israeli produce and groceries. During Ramadan, Israeli dates from stolen Palestinian land are marketed around the world while Israel attempts to force Palestinians from Jerusalem, demolish homes, and imprisons thousands more. By participating in the boycott of Israel, you can directly help to throw a wrench in the economy of settler colonialism. Download our Boycott Flyer to distribute at supermarkets, stores and other venues in your community!

The racist, settler colonial state of Israel and its war crimes against the Palestinian people are enabled and backed extensively by the over $3.8 billion each year given to Israel by the United States — targeted directly to support the Israeli occupation military killing children, women, men and elders throughout occupied Palestine. From Canada to Australia to the European Union, Western governments and imperialist powers provide ongoing diplomatic, political and economic support to Israel as well as selling billions of dollars of weaponry to the settler-colonial state. Meanwhile, they also purchase billions of dollars in weaponry from the Israeli state. Governments in league with imperialist powers, such as in the Philippines, Brazil, India and elsewhere, also buy weapons and “security” services — all “battle-tested” on the Palestinian population. Call your representatives, MPs, political officials and demand your government sanction Israel now, cut off all aid, expel its ambassadors, and stop buying and selling weapons!