Above photo: Community Control of Police, thousands in Chicago protest against police crimes. Monique in Fight Back News.

Over the past two weeks as Minneapolis and the rest of country have erupted in outrage over the murder of George Floyd by law enforcement—a spark which has ignited the collective experience of police terror across America going back as far as the institution of police has existed here—we have seen law enforcement double down on their crimes. As authorities dragged their feet to charge the four officers responsible for killing George Floyd, demonstrations have been met with such indiscriminate violence, repressive curfews, and military force to suppress this popular movement for change. These violent attempts to crush the protests have exposed the intentions of the state and the police towards progressive change and those united in fighting for it, but they have failed to kill this movement.

It is out of this uprising that the National Alliance Against Racist & Political Repression calls upon all its members, comrades, friends and allies to join a national day of action this Saturday, June 13ᵗʰ to call for direct democratic community control of the police, to continue the call for freedom for those caged in detention centers, jails, and prisons while the pandemic continues to spread, and finally to continue the call for justice for George Floyd and all other victims of police crimes from brutalization, illegal searches, torture, forced confessions, and murder.

Community Control of the Police means more than attaching some new name on the same ineffective review boards filled with law enforcement officers and their sympathizers; it means direct, democratic control of police departments, policies, budgets, and officers with full subpoena power through a civilian council elected by the people of the community served by the police. If these democratic demands are not accepted, then who are the police meant to serve? The cities of America have two choices, give people control over the institutions supposedly meant to serve them, or expose themselves for only being concerned with public relations and maintaining their own control. 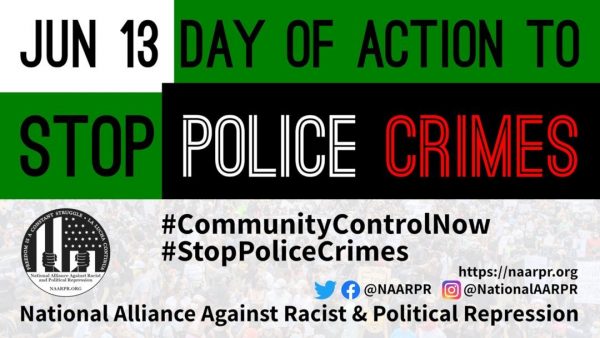