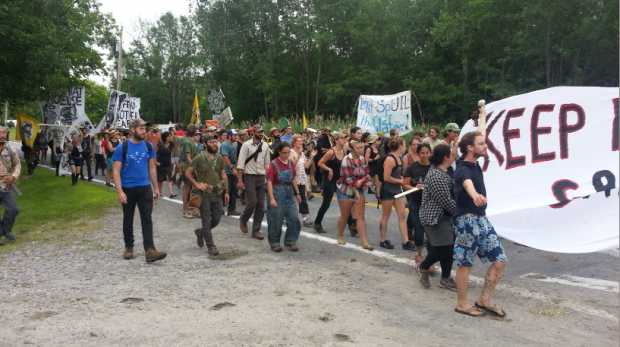 Above photo: March to train tracks in Ticonderoga. By Kevin Zeese.

Nine arrested while hundreds rally in day of action to stop extreme energy transport in the Northeast.

Champlain Valley – Hundreds of people participated today in a coordinated series of actions across the Champlain valley — including a blockade and lake flotilla — demanding an end to extreme energy extraction and transport. Rallying behind the slogan “Not by truck, not by rail, not by pipeline,” participants denounced industry attempts to turn the Champlain valley into an energy corridor for fracked gas, oil, and tar sands which are driving climate change.In Addison County, Vermont, over forty organizers with TWAC (Trans* and/or Women’s Action Camp) blocked trucks carrying fracked gas from making deliveries at the International Paper mill, resulting in five arrests. In Ticonderoga, New York, over 150 people participated in a symbolic oil train blockade and flotilla highlighting threats to the lake posed by the trains. [1] In Williston, Vermont, thirty people stopped construction on the Vermont fracked gas pipeline —  which is on life-support in the face of public opposition and regulatory uncertainty — with four people arrested. [2]

The events are part of a week of over 75 actions across North America marking the second anniversary of the Lac-Mégantic oil-by-rail disaster, which killed 47 people when a train full of fracked oil exploded and leveled the small Quebec town. [3]“It doesn’t matter how it’s being transported — fossil fuel extraction needs to stop,” said Meaghan LaSala, an organizer with SEEDs for Justice and the Stop Oil Trains Week of Action. “From extraction to combustion, low-income people, women, Indigenous communities, and communities of color are hit first and worst by extreme energy and global climate change.”Between 2008 and 2013, crude oil-by-rail shipments have risen more than 40-fold nationally, with tens of millions of gallons of oil transported annually down Lake Champlain towards Albany, NY. [4] The line carries fracked oil from the Bakken region of North Dakota, where Indigenous communities face water and air pollution, as well as oil patch “man camps” which are driving sexual violence and disappearances of Indigenous women. [5] Meanwhile, organizers in Albany, New York have been fighting a facility which would open the door to to shipping and processing tar sands from occupied Indigenous lands in Alberta, Canada. [6]

Organizers also took action to stop the transport of fracked gas through the valley. Since 2012, community members and climate justice organizers have led a grassroots campaign against Vermont Gas’s Addison Natural Gas Project (ANGP), a multi-phase expansion project which would have brought gas under Lake Champlain to the International Paper (IP) mill in Ticonderoga, NY. The campaign was successful earlier this year in forcing IP to withdraw from the project, which effectively cancelled the second phase and threw the first phase of the pipeline into regulatory review and uncertainty. Meanwhile, IP has contracted with NG Advantage to bring the same fracked gas from Vermont to Ticonderoga by truck.Martha Waterman was one of four arrested after locking to construction equipment on Phase 1 of the fracked gas pipeline Tuesday. She said, “I’m locking down today to defend my community from a future of fossil fuel use and climate chaos. And I’m also here to put an end to the destruction of lives and wild places. The time is now to prevent runaway climate change.”At the Crown Point bridge between Vermont and New York, over forty TWAC organizers stopped a truck carrying compressed fracked gas (CNG) from crossing and delivering to the IP mill. One organizer locked to the rear bumper of the rig, while others dropped a banner off the bridge, reading “Not by truck, rail, or pipeline.” Five people have been so far arrested.TWAC organizer Molly Stuart of Burlington, VT said, “We’re saying no to using the Champlain Valley as an energy corridor. The transportation of fossil fuels is volatile and dangerous whether it’s by pipeline, train, or truck. Extreme energy extraction is destructive in all stages, and we are taking action to denounce the ongoing colonization of First Nations territory in so-called Alberta, and the continued and ever-expanding reliance on fossil fuels.”