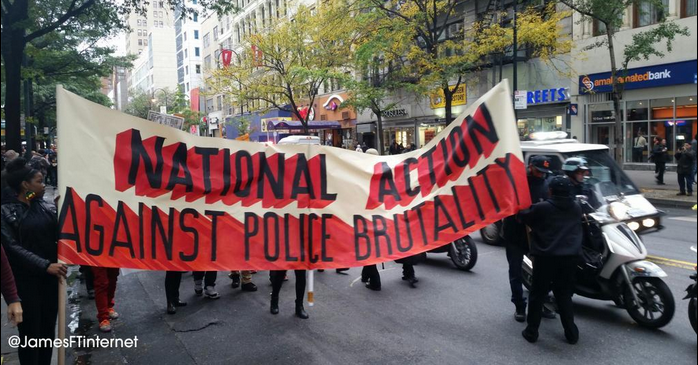 Today was the 19th annual National Day of Protest to Stop Police Brutality, Repression and the Criminalization of a Generation. People protested against intensified police killings and abuse, torture conditions inflicted on tens of thousands of incarcerated people, widespread use of solitary confinement, mass incarceration and young people being treated like criminals, “guilty until proven innocent.” Continuing the defiant protests going on in Ferguson, MO in response to the police killing of Michael Brown, people from coast to coast participated in the heightened resistance to police murder all across the country.

Against this backdrop, people in more than 50 cities across the United States took to the streets and protested in other ways. From Atlanta to Oakland, hundreds turned out with a strong message and strong actions – shutting down highways and marching past police barricades.

Here are some of the best moments in photos and tweets from the actions:

Demonstrators gathered in Woodruff Park and marched onto the highway, shutting it down.

ATL took over the highway for #o22 pic.twitter.com/NGrEiT1xUU

New York, NY Protesters initially marched along a permitted route, but then broke off and entered Times Square and past police barricades to the police station there.

Ferguson, MO The community marched in a funeral procession to the police station. They paused when they arrived at the places where Mike Brown and Kajieme Powell were murdered.

Oakland, CA Students filled up Oscar Grant Plaza before they began to march. Some expressed solidarity with the 43 murdered student-teachers of Ayotzinapa, Mexico. As they marched to the police station, they chanted “Indict, convict, send them killer cops to jail, the whole damn system is guilty as hell.” In front of the station, demonstrators staged a die-in.

Lots of references to #Ferguson being made today as we take the streets. #O22 #Oakland pic.twitter.com/YlIkAGcXta — Minister Flashes (@Federal_flashes) October 22, 2014

A staged die in as names of victims of police murder are read off in front of the police station. #Oakland #O22 pic.twitter.com/Ri9AMtuabr — Minister Flashes (@Federal_flashes) October 22, 2014

I am like the oldest one here #seattle #o22 pic.twitter.com/J0voAUHW5l