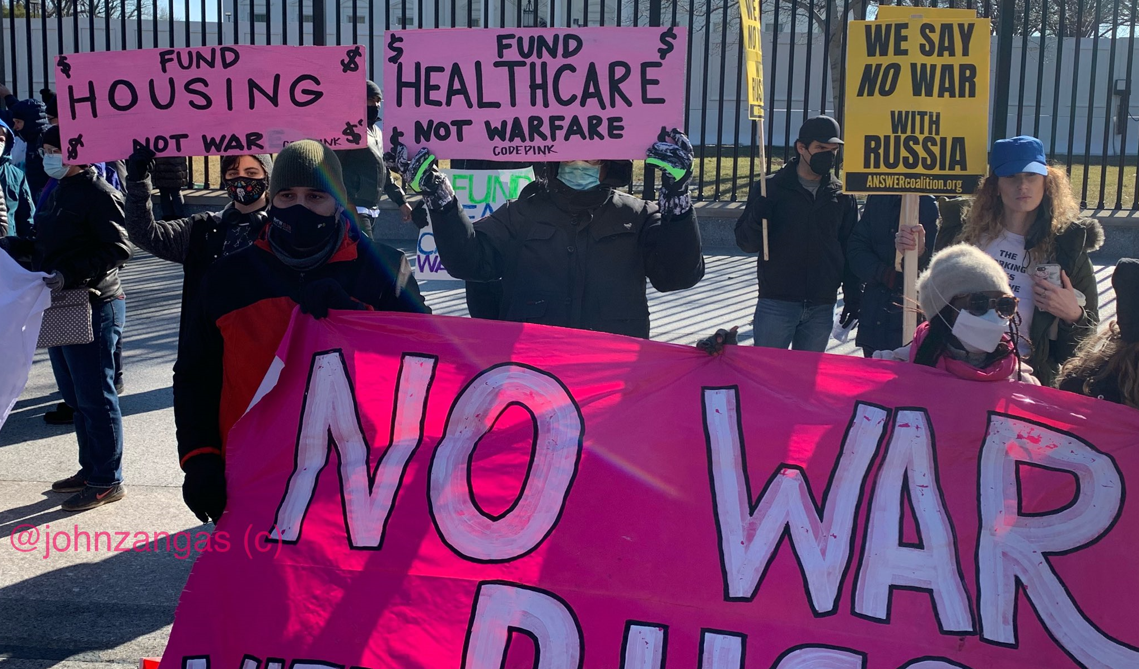 Above photo: Protest at the White House. John Zangas.

Washington DC—Local Peace Activists spoke about the growing crisis in East Europe, characterized the crisis as avoidable, and recommended solutions to avoid conflict. As tensions between world powers reached a climax not seen since the Cuban missile crisis of 1962, and diplomatic efforts between stakeholders seemed all but doomed to fail, the activists drew on years of experience and understanding of global issues to draw their recommendations. Despite ominous developments they still held out hope that war could be averted.

Their recommendations came as President Joe Biden spoke to the nation on Friday afternoon, saying that diplomacy was still an option. His optimism however, was eclipsed by media reports of shelling in Eastern Ukraine from rebel-held territory, pipeline explosions, a car bomb explosion in Donesk, and the evacuations of most Western Nation embassies from Kiev. Another report flashed that Ukraine separatists had evacuated Ukrainians to Russia from rebel held territory, further complicating efforts to unwind regional tensions.

Superpowers are Responsible for Arms Reduction

David Swanson, Executive Director, World Beyond War, said that both Russia and the United States have played roles in the crisis.

“I think we’re dealing with a situation in which all the momentum is toward escalation. You just can’t line up two armies in front of each other, swear to each one that the other is about to attack them, commit each one to counter-attacking, throw in nationalistic and ethnic hatred, and then hope for peace. Both sides are guilty of this, not because they are equal in all ways, but simply because they are guilty of this. The main way in which they are not equal is that this is happening on the border of Russia, whereas the U.S. instigator is thousands of miles away. Russia’s demands for months have been perfectly reasonable and exactly what the U.S. would demand if the roles were reversed. Evacuating people to safety is a good thing, though unfortunate and not a complete solution.”

Swanson pointed out that the U.S. had already derived benefits from the situation by arms sales and the establishment additional military bases in Eastern Europe. He also offered possible solutions to deescalation.

“A complete solution would be to begin a reverse arms-race, a deescalation. But the reason Biden and gang don’t much care about their predictions of imminent invasions making them look dumb is the other purposes of such a crisis that are rarely talked about. The U.S. has gotten out of this already: new bases in Slovakia, billions in tank sales to Poland, billions more in other weapons to Ukraine and Eastern Europe, and along with all of that, more U.S. influence in a Europe kept at odds with Russia—plus a proposal to Congress for record military spending without the slightest murmer of diaspproval from anywhere. A success in moving toward peace would require undoing all of those successes for the military industrial congressional “intelligence” media academic thinktank complex. But if we can make it through 50 days of an invasion being imminent, we can make it through 100.“

Michael Beer, Director of Nonviolence International, an Internationally recognized organization dedicated to building a global culture of nonviolence, said, “We need all governments to beat the drums of peace.” Beers further elaborated that the U.S. could do more to support peace monitoring support by strengthening the Organization for Security and Co-operation in Europe (OSCE) Special Monitoring Mission to Ukraine.

“While the US is concerned about the safety of its OSCE personnel it is at moments such as these when we most need peace monitors. It is critically important to maintain the personnel, who are currently involved in monitoring the situation along the line of contact and to take every possible measure to expand their capacity. Strengthening the Peace Monitoring Mission in Ukraine is something everyone can agree on.”

Michael Beer recently published his first book, Non-Violent Tactics in the 21st Century, which is a free update of Gene Sharp’s seminal text training the world in the value of nonviolent tactics, and is available online here.

Medea Benjamin, co-founder and peace activist at CODEPINK! Women For Peace, said in a video that the roots of the current situation were tied up in continuing support for expanding NATO, while at home both parties in the Congress continued to green-light massive military spending. This along with silence among the voices of progressives has led to the present situation in Ukraine.

“Parties In the House and Senate fast-tracked bills calling for massive [amounts] of weapons to be sent to Ukraine. It just shows us once again that we have two war parties. We’ve seen this before and we’re seeing it now. The progressives in the meantime, are much more focused on domestic issues and you don’t hear them in Congress coming out and screaming ‘what the heck is going on’ and ‘what we need now is deescalation, diplomacy, and not to antagonize Russia’.”

“At the time of the breakup of the Soviet Union there were guarantees given to then President Mikhail Gorbachev that NATO would not move eastward and instead NATO move easteard and now NATO is on Russia’s border. So instead of progressives in Congress saying now is the time to talk about NATO there is all this talk about shoring up NATO.”

Benjamin discussed the limited role peace groups have in projecting a peace narrative because mainstream media was a much longer reach. “Peace groups are small and don’t have the ability to mobilize. The [mainstream] media consistently puts out the message ‘is Biden strong enough’ and ‘should he put sanctions on Russia now or later’, so we don’t have the mainstream media that can help us. We don’t have enough voices in the Democratic party so we have to work overtime to get the message out that it is insane what the Biden Administration id doing with the support of most of the congress.”

Margaret Flowers, Director of Popular Resistance, said that Western nations made a pact with the planet to preserve the environment for future generations but the signors of the COP26 agreements were sidestepping their commitments by posturing and moving towards conflict.

“The U.S. military is the greatest user of fossil fuel as a single institution and it is also the greatest polluter on the planet. There is a growing awareness in the climate justice and anti-war movements that these things are closely interconnected and we can’t deal with the climate crisis if we don’t address the U.S. military and the wars it wages.”

She also said that the world is changing geopolitically and the U.S. needed to accept that it is no longer the dominant world power it once was.

Flowers said that in terms of solutions we already know what they are and they include working within the international structures we already have in a good-faith way by respecting the framework of the Minsk Protocols, agreements signed by the key regional governments in 2014/15. She stated that the U.S. must stop funding and arming those in the Ukraine government it helped put into power by coup in 2014 and it must work earnestly with the U.N. Security Council to stabilize East Europe.

“The U.S. has been propagating misinformation to the U.N. Security Council but must use that body in the way it was intended to resolve the conflict that is going on in a peaceful and lawful manner.”

Flowers also felt the situation was a very dangerous period because it involved two nuclear powers with many at home distracted by other tangential crisis: the Covid pandemic and economic pressures which have created poverty and hunger.

“This could easily escalate into a world war, a devastating nuclear war with nuclear fallout and nuclear winter. This is really a moment people need to be aware and mobilizing,” said Flowers.

American Empire, Exceptionalism, and the Flames of Global Conflict

Lou Wolf, Co-founder and Director of Covert Action Magazine, said that American empire was devoted to the doctrine of American exceptionalism and was intent on expanding the 900 to 1000 military bases it already had in order to secure its access to natural resources.

“The daily bellicose drumbeat of war is blasting out of the White House and bespeaks the real agenda to encircle Russia and openly use NATO as a battering ram.”

Wolf said that Presidents Biden and Putin needed “to stop trying to out-macho each other with inflammatory and war-like statements.” He also criticized the Biden Administration for delivering planeload after planeload of weapons that further undermined the situation in Ukraine.

Wolf said it would be difficult to avoid conflict at this point with the accusations which were not designed to be diplomatic. “The elephant in the room is the distinct possibility of a nuclear exchange and if that level of conflict were reached, it would extinguish the human race,” said Wolf.