Above image from the Defend J20 Resistance Twitter page.

Note: We will have more coverage of this important case tomorrow. The jury stood up to the government’s guilt-by-association prosecution that attempted to criminalize dissent. This is a very important decision as it threatened the right to protest in Washington, DC and nationally. The government should drop all charges of conspiracy. Unless prosecutors have evidence that a specific person committed a crime, there should be no prosecution.  KZ 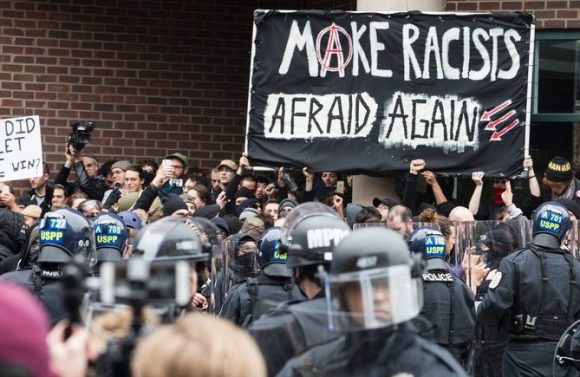 Supporters continue to point out that the government has attempted to chill political protest with high-level felony charges and that part of the punishment for defendant’s expressing their views is being forced to endure months of aggressive prosecution and a weeks-long trial. Most of the defendants facing trial have been working together to collectively defend themselves against the outrageous claims of the government, and will continue to do so.

The trial also underscored the extent to which the Trump administration was actively working with far-right and neo-fascist political groups like Project Veritas, Oath Keepers, Media Research Center and Rebel Media to criminalize and punish anti-fascist and anti-Trump activists. Despite what could be considered collusion with these groups, and the government’s attempt to criminalize “anti-establishment” views, the jury roundly rejected those efforts.

The next trial of seven Inauguration Day defendants on three misdemeanor charges—rioting, conspiracy to riot and one count of property detruction—has no scheduled trial date, but DC Superior Court Judge Lynn Leibovitz will hold a status hearing on January 19. The next trial on the same felony and misdemeanor charges used to try the defendants acquitted today is scheduled for March 5.

Defend J20 Resistance is a large group of felony defendants arrested on January 20, 2017 in Washington, DC and their supporters who have all agreed not to testify against each other and are working together to collectively defend themselves. DefendJ20Resistance.org is a product of their work.