Above Photo: D.C. police stand guard as protesters, including journalists, are corralled in background./Photo by Mark Hand

The Washington, DC, police assault on protesters on Donald Trump’s inauguration day was reminiscent of how police forces handle dissidents under dictatorships and tyrannical regimes around the world. For several hours, the police used pepper spray, tear gas, flash grenades and rubber bullets on people gathered in the streets of the capital city.

The police also rounded up people indiscriminately, including more than a handful of journalists, and arrested them. The people spent the night in jail, with the bulk of them facing felony rioting charges that carry a possible penalty of 10 years in prison.

District of Columbia police had used tear gas and pepper spray against antiwar and anti-globalization protesters in the past. But the scale of weaponry and the relentlessness of the police attack on civilians were unusual. However, the police tactic of corralling large groups of people indiscriminately was not unusual and in fact previously had gotten the Metropolitan Police Department (MPD) and the U.S. Park Police into hot water.

On Sept. 27, 2002, the District of Columbia police department, together with the U.S. Park Police, arrested nearly 400 anti-globalization protesters, tourists, bystanders, legal observers and passers-by. The two police agencies encircled Pershing Park, refused to let anyone leave and then mass arrested everyone who happened to be present and trapped by law enforcement in the park. Many were held bound wrist to ankle in stress-and-duress positions on a police gym floor for about 24 hours.

After lawsuits were filed, the MPD reached a settlement with the plaintiffs in which all of the arrests were considered null and void, and arrestees were eligible for monetary compensation. A separate agreement was reached with the U.S. Park Police where eligible arrestees also were granted monetary compensation. The MPD used similar unlawful police tactics in an April 2000 mass arrest that led to litigation and a major settlement for the people arrested.

The new policies implemented as part of the settlements generally prohibited the use of police lines to encircle protesters and demonstrations, also known as kettling; required probable cause for any protester to be arrested; provided fair notice and at least three warnings to disperse assembled groups prior to any lawful arrests rather than engaging in group sweeps; identified avenues of exit for protesters to comply with dispersal orders and ensuring that such warnings are clocked at least two minutes apart, and are audible throughout the crowd.

On inauguration day, the MPD pretended these policies did not exist and were back conducting indiscriminate mass arrests. Leading the effort was interim MPD Police Chief Peter Newsham, who was one of the police commanders involved in the unlawful arrest of the 400 people in Pershing Park in 2002.
No warnings were given on Jan. 20. People were not allowed to disperse. Everyone encircled by the police was arrested. The Metropolitan Police Department had gone rogue.

Around 10 a.m. on Jan. 20, hundreds of people had gathered at Logan Circle in Northwest D.C., a few blocks from the city’s central business district. Shortly thereafter, the group began its march south on 13th Street in the direction of the inaugural parade route. The march was composed of a diverse group, including anti-fascists, anti-capitalists, anarchists, socialists, leftists, liberals, legal aid representatives from the National Lawyers Guild and a large contingent of journalists.

The march proceeded for several blocks south to Franklin Square. From there, the marchers reversed course and headed back north where they ended up walking east on L Street. A few minutes later, the police encircled a large group of people, including protesters, journalists and legal aid representatives, and boxed them in. The MPD would end up arresting each of these individuals and charging them with felony rioting.

Starting at the time of the corralling of people at the corner of 12th and L Streets, the D.C. police spent the next several hours randomly using pepper spray, tear gas, flash grenades and rubber bullets against people in this area of the downtown area. As a side note, the corralling and arrest of this large group of people occurred a few hours before a limousine and trash cans were set on fire adjacent to Franklin Square, a large grassy area located a short distance from 12th and L Streets. Photos of the flaming limousine were widely published in mainstream media sources and on social media. Therefore, none of the people arrested as part of this indiscriminate police roundup could have been involved in those fires.

The charges against the journalists kettled at 12th and L Streets — Evan Engel, Alexander Rubinstein, Jack Keller, Matthew Hopard, Shay Horse, Aaron Cantu and possibly other reporters — have been denounced by press freedom groups. Each of these journalist faces up to 10 years in prison.

Along with the journalists’ non-involvement in any window-smashing, there is a strong possibility that none of the people who were corralled and arrested at the corner of 12th and L Streets had engaged in any of the property damage that occurred prior to their detainment.

Along the march route, a tiny number of marchers broke off from the main march and smashed the windows of a Starbucks coffee shop and a Bank of America branch. Additionally, some newspaper boxes were overturned and pulled into the street by a small number of marchers.

Instead of attempting to identify the handful of people who smashed the windows of the Starbucks coffee shop and the Bank of America branch, the MPD chose to corral and indiscriminately arrest anyone who happened to be at the intersection of 12th and L Streets around 10:30 a.m. on Jan. 20. As it happened, the police opted to go back 15 years in time and adopt the unlawful 2002 tactic of arresting everyone they had encircled.

Truthout, the investigative news site, on Jan. 26 published a statement of solidarity with the journalists who were arrested on Jan. 20. Journalists supporting other journalists in a time of need is a good thing. But the journalists would be better served if support also came from news organizations beyond the independent media. 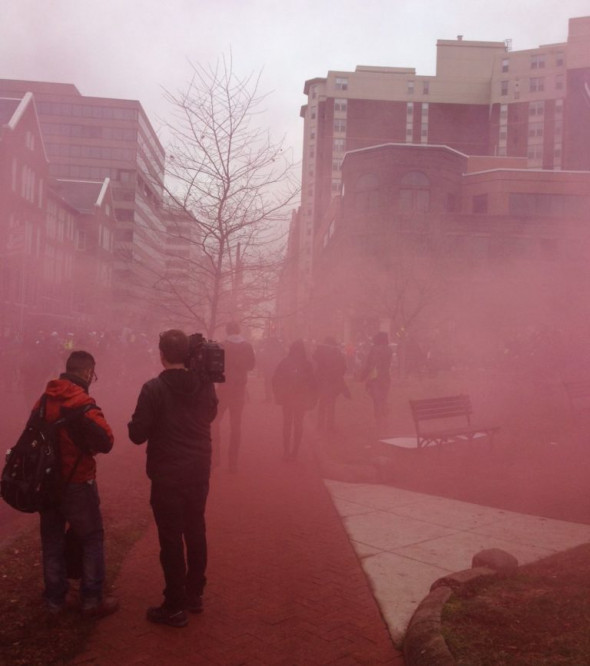 On inauguration day, police spray chemicals at people at the corner of 12th and L Streets in Washington, DC./Photo by Mark Hand