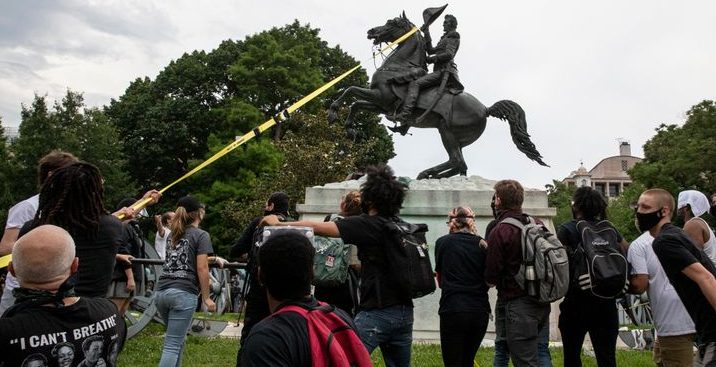 Above photo: Protesters attempt to pull down statue of Andrew Jackson in Lafayette Park across from the White House, June 22, 2020. By Tasos Katopodis from Getty Images.

Protesters tried to pull down a statue of President Andrew Jackson near the White House Monday night before being dispersed by police.

AP News – WUSA-TV in Washington reported that police used pepper spray to move protesters out of Lafayette Square, where the Jackson statue is located. Videos posted on social media showed that the protesters had climbed on the statue and tied ropes around it, then tried to pull it off its pedestal.

The statue shows Jackson in a military uniform, riding a horse that is rearing on its hind legs. The 19th-century president’s ruthless treatment of Native Americans has made his statue a target of demonstrators protesting the United States’ legacy of racial injustice.

Protestors in Washington, D.C. tearing down a statue of Andrew Jackson, the president responsible for the Trail of Tears and a hero to President Trump. Video courtesy of ⁦⁦@jonathanchase_⁩ pic.twitter.com/MH2t4m7MT9

The Washington Post reported “The scene unfolded dramatically as hundreds of demonstrators protesting police brutality locked arms around the statue in Lafayette Square shortly before 8 p.m., while chanting, “Hey, hey, ho, ho, Andrew Jackson’s got to go.” Some “scaled the statue and draped ropes around the seventh president astride a horse. Someone scrawled ‘killer’ in black on the pedestal below.”

New York Magazine reported that “Jackson, the seventh president of the United States, is Trump’s favorite executive and a natural candidate for crowd action in the current moment. A slaveowner, Jackson ordered the forced removal of tens of thousands of Cherokee, Seminole, Chickasaw, and Choctaw nation members from the American southeast in order to clear the land for plantations run on slave labor. The statue, cast in 1852 by Clark Mills, also involved the labor of enslaved craftsman Phillip Reid, who aided in the casting of the Statue of Freedom on top of the dome of the U.S. Capitol building.”

Minutes ago protesters in Lafayette Square outside the White House were trying to pull down the statue of Andrew Jackson.

Police then forced protesters away using pepper spray and batons.pic.twitter.com/ht1e8Ghogj

The Washington Post reported a confrontation began after city officials tried to clear out a series of tents that had been set up along H Street NW, which D.C. Police Chief Peter Newsham said were “creating a potential safety hazard.” MPD confirmed the use of pepper spray to the Post. Video showed police clearing H Street to prevent an autonomous zone from forming.

They’re clearing H and the tents beside the church pic.twitter.com/0MIEWE6iXn

DCist reports “The confrontation on Monday comes after the D.C. Council passed an emergency police reform bill by unanimous vote that prohibits police from using tear gas, rubber bullets, stun grenades, and riot gear to disperse protesters, among other requirements. The bill has been sent to Mayor Muriel Bowser for review and has not yet taken effect.”

On Monday night in Lafayette Park where the Jackson statue was being pulled down, police again used chemical weapons to dispel the demonstrators, despite the emergency bill signed by the D.C. Council banning officers from using pepper spray as a crowd deterrent.

Clashes with Police in front of Andrew Jackson statue pic.twitter.com/VwZqdORdex

Holy shit police have learned absolutely nothing this is how they’re treating protesters outside the White House right now.

When protests grew in Lafayette Park earlier in the anti-racist protest movement, President Trump was rushed to the basement bunker in the White House. This time New York Magazine reports panic was also building, writing “Tensions were high within the White House as well. CNN’s Kaitlan Collins reported that the press corps was required to leave the premises. Later in the evening, the Secret Service stated that the agency was ‘looking into allegations that some members of the media were asked to vacate the White House complex.’ The normal procedure in an emergency is for reporters to relocate ‘into the press briefing room.'”

The New York Times reports that Andrew Jackson is President Trump’s favorite president and Trump “had a portrait of Jackson hung in the Oval Office shortly after his inauguration.” The Times describes Andrew Jackson: “Jackson, the seventh president, owned slaves and put into place policies that forced Native Americans from their land, with some 15,000 people dying on the Trail of Tears. Trump tweeted late Monday:

Numerous people arrested in D.C. for the disgraceful vandalism, in Lafayette Park, of the magnificent Statue of Andrew Jackson, in addition to the exterior defacing of St. John’s Church across the street. 10 years in prison under the Veteran’s Memorial Preservation Act. Beware!

The Washington Post reported that “Trump also wrote Tuesday morning on Twitter that he has ‘authorized the Federal Government to arrest anyone who vandalizes or destroys any monument, statue or other such Federal property in the U.S. with up to 10 years in prison, per the Veteran’s Memorial Preservation Act, or such other laws that may be pertinent…..'”

The Hill reports “President Trump on Tuesday threatened that protesters who attempted to establish an “autonomous zone” in the nation’s capital would be met with “serious force” following a night of protests near the White House. There will never be an ‘Autonomous Zone’ in Washington, D.C., as long as I’m your President. If they try they will be met with serious force!” Trump tweeted.