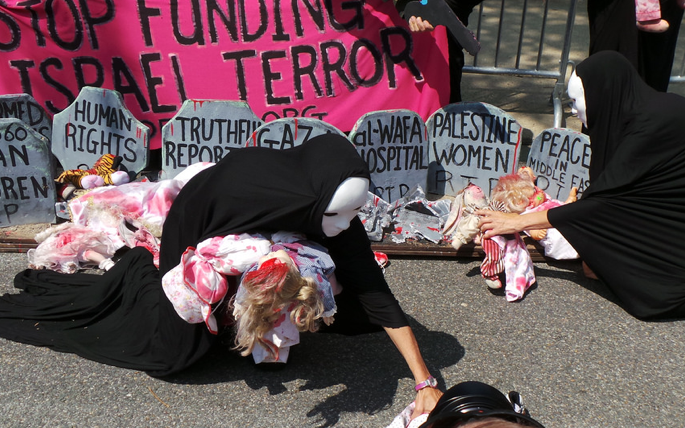 Washington DC –– On Tuesday, July 29 at 6pm, activists gathered outside the DC home of Secretary John Kerry, calling on him to stand tall against Israeli Prime Minister Netanyahu and to push for a just ceasefire that includes lifting the siege of Gaza. Activists commemorated the over 1,000 deaths, especially the hundreds of Palestinian children killed in the Israeli assault.

The group gathered at Kerry’s house at 6pm, then marched through Georgetown and returned for a candlelight vigil at the house.

Activists were encouraged that Kerry had recognized that “Palestinians can’t have a cease-fire in which they think the status quo is going to stay. Palestinians need to live with dignity, with some freedom, with goods that can come in and out, and they need a life that is free from the current restraints.”

But the US government continues to support Israel militarily and diplomatically, justifying Israel’s massive assault on civilians in Gaza and the civilian infrastructure as part of Israel “right to self defense.”

“Israeli actions targeting civilian infrastructure—hospitals, schools, electric power plants, sewage plants—indicate they are attempting to destroy not only Hamas, but  the people in Gaza.  I call on the United States Government to end its $3 billion annual military aid to Israel and work for a ceasefire that includes lifting the siege on Gaza.  It is predictable that as long as the siege continues, the rockets and tunnels will continue,” said retired Colonel and diplomat Ann Wright.

“We want Kerry to recognize that the only way to end the violence is to guarantee full rights for Palestinians. Gaza must have open borders, an airport, a seaport, and the right to control its own territory,” said CODEPINK cofounder Medea Benjamin, who has been to Gaza six times.

Over 1,000 Palestinians have been killed by Israel’s ongoing assault on Gaza. Even hospitals, schools, radio stations and power plants are being bombed by Israeli forces. As U.S. citizens whose tax dollars are underwriting this carnage, the activists call on Kerry to call for an end to the destruction of Gaza and for a just solution.

On July 30th a protest was held at the Israeli Embassy in Washington, DC that included a sit-in and resulted in arrests. Ret. Col. Ann Wright reported “Nine of us were proudly arrested yesterday at the Israeli embassy.”