Washington, DC — A rally was held at the White House on Monday, organized by two college students, in response to the Charlottesville terror attack on anti-racist protesters. Many self-identified members of antifa, a loosely affiliated organization of anti-racist, anti-supremacist activists, rallied with them.

About 500 gathered for the open mic rally. Organizers Olivia Moulton and Patty Pablo invited people of color and marginalized groups to speak about their experiences with White supremacy.

“We realized we had to do something. We couldn’t just sit around,” said Moulton, a sophomore at a local community college. “We want to create a safe space for people to vocalize how they feel.”

Pablo gave priority to minority voices in the crowd. She urged everyone to listen closely to the speakers with an open mind and learn from them how racism affects and marginalizes their communities.

Speakers condemned the Charlottesville Unite the Right rally and subsequent terror attack by a White supremacist on the anti-racist protest march which began after the White supremacists and neo-Nazis left. They also rebuked President Trump for his two-day delay in condemning the attack.

A speaker, who identified herself as Reykia, said that her experiences with racism had been ongoing throughout her life. “Lady Gaga is using the hashtag #thisisnotus but it is completely incorrect. It is us in all types of ways. This is our America. Learn it and accept it,” she said. “This is us until we change it.” 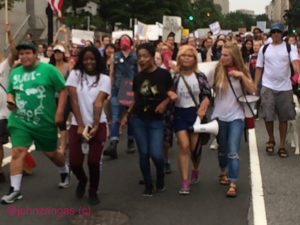 The rally then left the White House and marched past Trump International Hotel where protesters chanted “shame” as they passed the doors. It ended in Judiciary Square at the base of a statue of Confederate General Albert Pike. Activists climbed the statue, and more members of the public spoke out against racism and White supremacy.

The rally and march were in step with a growing national tide of opposition against White supremacists and neo-Nazi groups and their two-day event in Charlottesville. Over 30 groups of close to 500 people, led by KKK leader David Duke and so-called Alt-Right guru Richard Spencer, attacked counterprotesters in Charlottesville at Emancipation Park on Saturday.

Over an hour after the Charlottesville rally descended into violence, Virginia State Police declared the protest illegal and ordered everyone to leave. Soon after, James A. Fields, one of the White supremacists who was identified from photographs in the park, drove his car into the anti-racist protest, killing Heather Heyer, a civil rights activist, just as the march was getting underway. On Monday, he was charged with second-degree murder, three counts of malicious wounding and failure to stop in an accident that resulted in death.

A national backlash against the Trump Administration has grown quickly, fueled by rage over the terror attack, a seeming reluctance by Trump to distance the White House from Nationalist groups, and his two-day delay in acknowledging that the killing was terrorism.

“White supremacy is not just harmful to non-White people, it is harmful to all people including White people,” said Courtney Dowe, a long-term DC resident. “You cannot diminish someone else’s humanity without diminishing your own.” 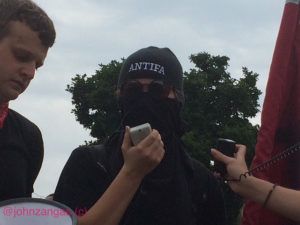 An unidentified person from antifa related their first-hand experience in Charlottesville administering first aid to Heather Heyer. The person remained cloaked while speaking. “The reason someone was killed this weekend was that Nazis and White supremacists were given space to spread their hate,” the person said. “Hate speech should be condemned because it’s not straight up opinion, it’s violence.”

The antifa spokesperson spoke about how police ordered the medics away from the crime scene, even thought they were treating life-threatening injuries and administering CPR.

At the same time that protesters rallied in D.C. at Pike statue, another Civil War statue in Durham, N.C., was torn down by activists who grew impatient with state government for taking so long to remove it.

And meanwhile in New York City, thousands gathered near Trump Hotel in downtown Manhattan in protest of the administration’s delay in speaking out against the Charlottesville terror attack.

Similar anti-supremacist protests have spread across the country in the wake of the Charlottesville terror attack.