Washington, DC – Members of the transgender community led a rally on Friday afternoon at Freedom Plaza, marking the 50th anniversary of the Stonewall Inn uprising on Christopher Street in New York City. About a dozen transgender organizers and activists delivered a petition to DC Mayor Muriel Bowser’s office and the City Council, demanding passage of the Community Safety and Health Amendment Act of 2019. The rally was led by advocacy group No Justice No Pride, HIPS (Sex Workers Advocates Coalition), and CAS trans activists who gave testimonials of how their lives would be improved with passage of the bill.

No Justice No Pride (NJNP) was organized as a social justice collective to provide resources and support for the trans community and recently created a refuge for them. NJNP also advocates on behalf of trans and queer persons and lobbies the city government.

A contingent of trans activists lobbied for the DC Judiciary Committee to convene a hearing on the Community Safety and Health Amendment Act of 2019 and for the City Council to pass the bill. Then they joined about 200 allies at the rally in Freedom Plaza, across from the John A. Wilson Building which houses the Mayor’s and City Council’s offices of the District of Columbia.

If passed, the bill would decriminalize sex work and allow transgender sex workers to live safely in the community. It would also benefit the community at large by allowing the creation of safe spaces for the transgender community, improve community health and safety, and remove the need for policing them, something advocates say needlessly oppresses them with abusive police tactics. It would also enable basic resources for the transgender community to leave the sex work industry altogether and elevate their economic standing.

The decriminalization of sex work–the removal of criminal penalties for consensual sex between adults for exchange–is not a new or radical approach to addressing issues related to sex work and community concerns. There are fifteen countries that have already legalized sex work. Among them is New Zealand, a country that has reported improvements in the health and safety of its communities. A report in BJT, a healthcare professional publication, reported that legalized sex work in counties that adopted such measures realized improvements in community health and safety.

Job options for trans individuals are limited due to discrimination, making sex work one of the only options open for their economic viability, according to many of the advocates who spoke at the rally.

But it is not just about employment and economics, it is about survival and human rights. Two Black trans women have been slain in the DMV region recently, including Zoe Spears who was shot on June 13, 2019, and Ashanti Carmon who was slain on March 30, 2019. Trans women also often face violence and threats in their daily routines.

Emmelia Talarico, a lead organizer at NJNP, related an incident she recently experienced when attacked by several men during a hate crime. She was chased by assailants, who began throwing rocks at her home. DC police were called but took over 45 minutes to arrive and “had an attitude,” she said.

“A lot of folks get stuck thinking we can trust police or thinking the police will respect us, that they won’t have biases, but we’re here to tell you ‘no,’ they’re out there on K Street in plainclothes trying to get sex from sex workers, trying to lock them up—and that’s not okay,” she said. 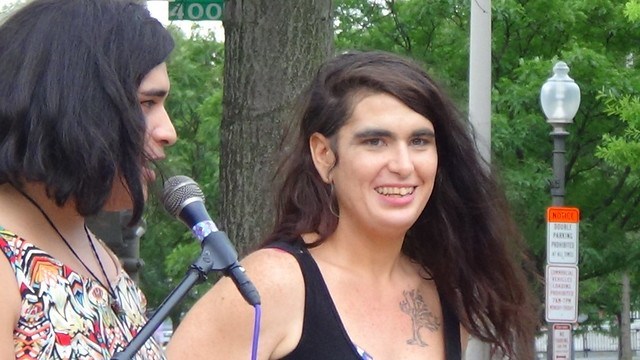 Talarico said that was one of the main reasons NJNP was advocating for the bill, so Black trans sex workers would not have to live in fear of police oppression.

A study report by Urban Institute found that 7 U.S. cities generated between $40 and $390 million annually in sex work trade, equivalent to a multi-billion-dollar underground economy. The report rationalized a need for legalization for community safety and health, as well as well as the safety and health of those in sex work and their customers.

Dee, a trans sex worker in her 60s, spoke about the challenges facing black trans youth trying to find work. “Being trans is not an issue, but suppressing our right to live is an issue,” she said. Dee decried the Mayor and Council for not acting on the decriminalization of sex work bill. “I say to the City, the Mayor and City Council, if you’re not going to promote decriminalization of sex work then give us a damn job.”

Nona, a Program Manager at CAS, said that trans women of color want employment and to work alongside their cisgender counterparts. “Trans women of color may not have job function skills, but it’s only due to not being hired yet. We are eager to learn,” she said.

To support, volunteer or donate to efforts to provide accommodations for the transgender community visit NJNP website.