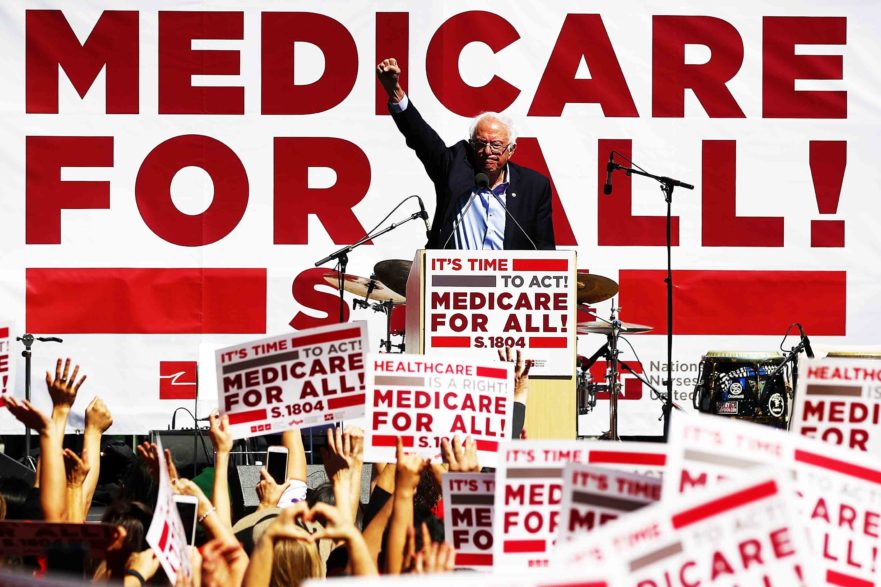 In April 2017, the Democratic Congressional Campaign Committee (DCCC) wanted to find out the best way for its candidates to address the topic of health care, so it hired two research firms to conduct internal polling focused on 52 battleground districts expected to be close races in 2018. Stan Greenberg, a pollster and founding partner with Greenberg Quinlan Rosner Research (GQR), presented his findings at the offices of the Democratic National Committee and suggested that Democratic candidates should focus on the flaws of Republican plans and offer “Proactive Solutions (only if asked),” as The Intercept reported.

While “single-payer” never made it into the proposed talking points compiled in its memo, GQR listed numerous “likely Republican lines of attack” against Democratic House candidates over Sen. Bernie Sanders’ Medicare for All bill, which has 15 Democratic cosponsors. (Medicare for All is a form of single-payer health care.) The memo offered no suggestions for how to counter these criticisms.

“The American people overwhelmingly want Congress to improve the Affordable Care Act, not repeal it or replace it with something radically different,” reads the memo. “We need to offer reasonable solutions to improve the law instead of a massive overhaul.”

Polling on the issue, however, suggests otherwise. One poll from September found that 52 percent of Americans favor single-payer health care, and 69 percent of Democrats support such a policy.

Campaign finance disclosures show that one of the DCCC’s biggest fundraisers is a lobbyist whose firm, Subject Matter, has been working for UnitedHealth Group, a health insurance giant that supports further privatizing Medicare. Subject Matter’s founder and top lobbyist, veteran Democratic staffer-turned-lobbyist Steve Elmendorf, has been bundling contributions for the DCCC, and in the current election cycle he’s raised at least $164,000. In total, bundlers have brought in close to $1.6 million to the DCCC in 2017 and 2018, making Elmendorf single-handedly responsible for more than ten percent of the DCCC’s bundled donations.

On behalf of UnitedHealth Group, Elmendorf has recently lobbied Congress on a health insurer tax that is part of the Affordable Care Act. Earlier lobbying records detail the company’s goal: “to repeal or delay” the tax. In January, the tax was delayed one year and will not go into effect until 2019.

Nina Turner, president of Our Revolution, the Sanders-inspired nonprofit that endorses progressive candidates, told TYT that party groups may be conflicted when it comes to donations. “While I cannot speak about Steve Elmendorf specifically, I do think this speaks to the need for Democrats to have a moral conversation about whether they want to continue to take money from people who lobby against the best interest of our party’s base.”

Neither Elmendorf nor the DCCC responded to TYT requests for comments.

Personally, Elmendorf has contributed $16,400 to the DCCC since last year and thousands more to at least a dozen moderate Democratic candidates, none of whom have publicly supported Medicare for All. Among Elmendorf’s donations so far in the 2018 election cycle:

Elmendorf also donated $1,500 this cycle to the campaign of Sen. Debbie Stabenow (D-Mich.). Although Stabenow has introduced legislation to lower the Medicare eligibility age from 65 to 55, she has not come out for Sanders’ bill.

Disclosure forms show that many of the Democrats Elmendorf supports are also supported by the political action committees of companies and industries that would be threatened by Medicare for All, including some of Elmendorf’s lobbying clients.

The UnitedHealth Group PAC has donated $4,500 to Kennedy’s 2018 campaign, $4,000 to Peters’ campaign, and $2,500 each to Kaine and McCaskill’s campaigns, according to data compiled by the Center for Responsive Politics. The PAC of America’s Health Insurance Plans, a health insurance trade organization, gave Peters’ campaign $1,000 last year and donated $5,000 to the New Democrat Coalition PAC and $5,000 to the conservative Democratic Blue Dog PAC.

DaVita PAC is also a frequent campaign donor, and has contributed to the campaigns of McCaskill ($5,500), Kaine ($2,000) and other moderate Democrats during this election cycle.

“Until the Democratic Party seriously takes on the cause of getting money out of politics there will always be conflicts,” said Turner. “They have the ability, like they did during the Obama administration, to not take money from lobbyists. So it is possible, but they have to choose whether they want to continue to support the system that gives undue influence to special interests over the working people that make up the party.”

As the DCCC was discouraging House candidates from backing Medicare for All, the committee also went after a progressive Democrat who supports single-payer health care. Earlier this year, the DCCC took the extremely rare step of publishing scathing opposition research against Sanders-aligned Texas congressional candidate Laura Moser, who backs single-payer. Moser’s opponent in a runoff election to represent the 7th Congressional District is Lizzie Pannill Fletcher, who does not mention single-payer or Medicare for All on her campaign website.

Sanders, who has said he had to take on the Democratic National Committee in the 2016 presidential campaign, called out the DCCC’s attacks on Moser. “That just continues the process of debasing the Democratic system in this country and is why so many people are disgusted with politics,” he told the AP.