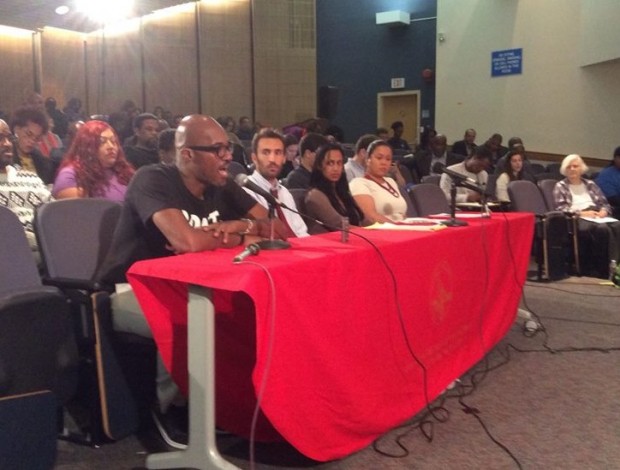 Above: Kymone Freeman testifying before DC City Council on behalf of #DCFerguson

I represent #DCFerguson with brothers Kenny Nero, Salim Adufo and Eugene Puryear Green Party Candidate for DC At-Large Council. We form like Voltron because we wanted to come together to lobby some of the progressive mayors across this country to adopt radical police reform and since we do not have a progressive mayor we are very glad that the Council is here today to hear our grievances.

What do we want? Beyond the rhetoric of justice and equality and all those empty slogans that have produced very little. We want three things:

Secondly, we want to see a significant number of police in our communities to actually live in our community. I know with gentrification that’s a challenge, but that’s your problem not mine so y’all work on that. I do understand that 57% of all DC Government employees can’t afford to actually live in DC and that’s another issue unto itself.  We cannot continue to be a labor haven for displaced Pennsylvanians and Ohioans who can’t find work in the rust belt and want to come here for job to enjoy beating up on Black People.

Third and foremost we want any officer who has fired upon or have caused the death of an unarmed, innocent person, innocent of any wrongdoing to be fired, arrested and convicted. Period. It can no longer anymore be: “Oh, my bad. It was a wallet. Or I was scared.” Well, if that rule were to apply both ways then police would be getting shot every time we get pulled over because our hearts drops into our stomachs. Fear is not an excuse to take someone’s life. If so, then they need to get another job. First and foremost, police officers are not the most dangerous job out here. You can check the labor statistics on that. They are not the most dangerous job. They are however, more likely to beat their wives. Sometimes, when council members beat their wives and they call the police they sometimes get off and their would be arresting officer becomes the Chief of Police, but that’s another subject.

We need to get into the fact that the police are not serving the community. The police are here to protect and serve, but to whom and to what? Because we can go over and over cases. I am guilty of no crime and haven’t been convicted of anything in my entire 44 years on this planet, but I cannot give you all the number of stories of the police brutalizing me over the course of my life. But fortunately, most of that has happened between the ages of 16 and 30. Those are the target red areas for domestic terrorism upon people of color. Ok?

First and foremost, when police pull you over it does not matter if they are White, Black or Yellow. It matters if you are. Ok? That’s what is going to determine how it’s going to go down.

Let me give you an example. I was going to, ironically I don’t want to seem like the complete radical here, but I was going to see a Farrakhan Rally downtown at the Convention Center. I’m exiting my car, now my car had been stolen. Stolen in DC and returned to me by DC Police department. Paid the fine to get it out of DC Impoundment lot. The steering column was broken due to that theft. Alright, I parked the car, but before I could exit the car I have guns in my face on my left and guns on my right and back. I am surrounded by three different officers’ with guns drawn. No one stopped to ask me for my I.D. to determine whether or not the car was registered to me and I was the rightful owner, no. I was dragged out the car kicking and screaming. One officer as I was protesting my treatment actually choked me. He put his hands around my throat and choked me, but since he was a small man and he couldn’t hurt me I didn’t want to show any fear or give him the pleasure. But I always regret not doing what I wanted to do to this little man who thought he was a big man.

That is just another example of over-policing on us. I was arrested because they had to arrest me because by this point an audience was drawn and when they found it was my car they had to find something, i.e., disorderly conduct. Disorderly conduct is one of those bum charges they throw on you when they can’t get anything else to stick. From what I’m hearing now they have even made it possible to get an Assaulting a Police Officer charge if I just move, if I sneeze, you know, not actually strike an officer as some of them are deserving of. But just for simply protesting your rights against false arrest.

So these are things that need to happen. Let me reiterate in closing:

–       One, we need to have the Office of Police Complaints empowered with the power to indict officers for misconduct.

–       Finally, we want any officer who has fired upon or caused the death of an unarmed otherwise innocent civilian to be fired, to be arrested, to be convicted and to go to jail. Anything less than that, is lip service to this issue.

We have not seen any qualitative changes with a Black President to a Black Attorney General, who just quit, but we have not seen any changes. Until we get these three things we will continue to shut down as much as we can with #DCFerguson. Thank You.