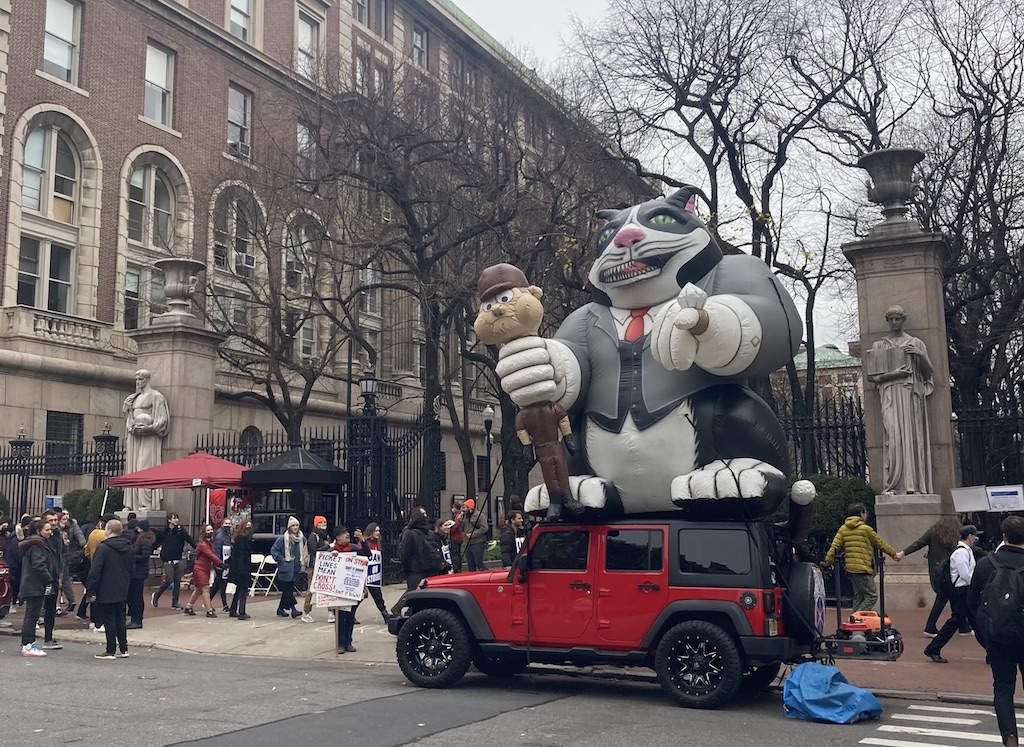 Denying Student Workers Healthcare And A Living Wage Is Violence

Columbia University’s administration has denounced the “violence” at this week’s completely peaceful picket by student workers.

Do not be fooled: the real violence is the university denying student workers healthcare, a living wage, and neutral third-party arbitration.

New York City – On Wednesday, November 8, Columbia student workers (UAW Local 2110) held one of the largest pickets yet of their six-week strike to demand increased wages to meet costs of living, neutral third-party arbitration, and comprehensive healthcare benefits. Workers from unions throughout New York City such as the CUNY’s Professional Staff Congress (PSC), the Graduate Student Organizing Committee (GSOC) at NYU, the Teamsters, and NewsGuild of New York showed up to join the picket in solidarity with the striking workers. They picketed various entrances, encouraging those who attempted to enter the university to not cross the picket line.

As a healthcare worker in New York City, I attended the picket to show my solidarity with the striking workers. The picket was completely peaceful, yet yesterday, Columbia’s Provost Mary C. Boyce sent an email to members of the Columbia community condemning “violence” that occured on Wednesday. This email is entirely untrue. It is wholly within a worker’s rights to picket, including maintaining a picket line with one’s physical presence; however, there was no violence. The Columbia administration is summoning up this classic union-busting fairy tale because they feel threatened by the activation of their own workers, and by the growing shows of solidarity from workers across the city. They see the strike gaining momentum and support, so they need to invent “violence” in an effort to hurt public support for the strike.

A key point in the above statement is that there was no violence from striking workers — the violence came from the university itself, when the administration called the NYPD. In other words, a university that pretends to care about “diversity,” “anti-racism,” and principles of social justice, called the most racist, murderous gang in all of New York, the NYPD, to yesterday’s picket. A university that professes to care about its BIPOC students and faculty called members of an institution whose origins lie in patrols of enslaved people to a picket line held by many of its BIPOC workers. This is not surprising, since the cops have always served as strike-breakers and defenders of private property of the rich, but calling cops to a picket line is especially hypocritical coming from a provost and administration that claim to have such “concern” for “safety.” So, who was committing the violence yesterday?

I don’t want to see another email from Lee Bollinger or @Columbia about their so-called commitment to “diversity” and “anti-racism” when they call NYPD on @SW_Columbia striking workers peacefully exercising our right to picket. #CUonStrike

In fact, multiple acts of violence have been committed against picketers, as documented here. Outside of physical violence, multiple acts of verbal harassment have been committed by workers and students attempting to cross the line, physically shoving and elbowing picketers to get through the line. But has the Columbia administration ridden in on their white horse of concern-trolling to condemn these acts? Of course not.

It’s important to note that Columbia’s “violence” was not limited to yesterday. The university is denying workers the healthcare they need, and which they are on strike to demand. This is violent. Healthcare workers like myself see this violence every day in a system that puts profit accumulation over people’s lives. Columbia perpetuates this same violence by denying student workers the access to the coverage they need, while still demanding the commitments of full-time study and graduate work.

As Left Voice member and PSC-CUNY member Olivia Wood notes in the video below, “What is violent is calling the cops on your own students and denying them healthcare, while paying them not enough to afford the things they need. That causes violence on the body and mind.”

While Columbia wants to pretend it cares about “violence” and everyone’s safety, it is clear the only thing they actually care about is maintaining the exploitative status quo, and not coming to a deal with striking workers. The only violent actor here is Columbia itself. They are afraid that giving workers the deal they deserve could set an example for other workers, both inside and outside of Columbia: workers rising up together have the power to not only fight against exploitative working conditions, but against the economic system that does violence to us all.