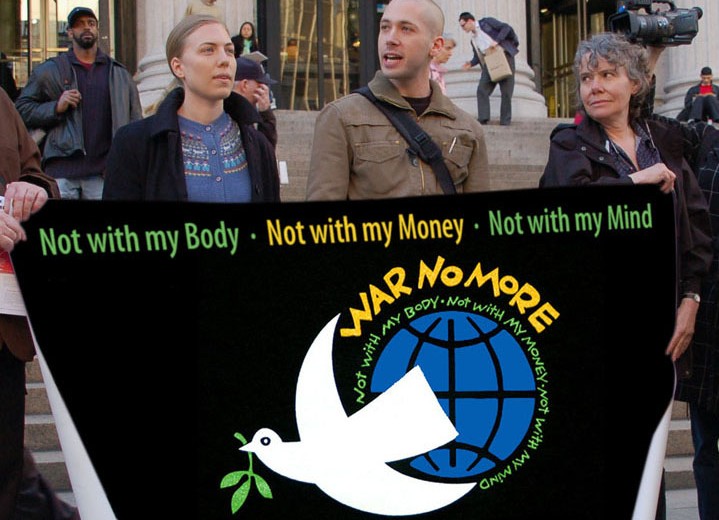 ‘Dear IRS’ We Refuse To Pay For War And Weapons

“We cannot in conscience pay for the killing of other human beings or pay for war and preparations for war.”

“I have not included a check for the amount I still owe for 2014, about half of my total income tax bill. I do not voluntarily pay for government programs that involve killing human beings or requiring them to kill others.”

“As I calculate my total taxes ‘owed’ I like to dream about how the money will be used. Instead of paying for drones or bombs I am paying to ensure that everyone has access to basic needs and the tools needed to succeed in our community.”

As April 15, tax day, approaches, thousands of individuals — like David and Jan Hartsough, Elizabeth Boardman, and Ari Rosenberg quoted above — sit down and write letters to the IRS, Congresspeople, the President, newspapers, blogs, and friends and family explaining why they protest war with their taxes.

On April 15 in communities across the United States, those same people will be joining others in vigils, pickets, rallies, and forums to call attention to what they see as the harmful effects of military spending.

A list of U.S. Tax Day events can be found at nwtrcc.org/TaxDayOrganizing.php.

People in the U.S. who are working to change federal budget priorities away from military spending and to human and environmental needs join others around the world on the Global Day of Action on Military Spending. The April 13-15 days of action coincide with the release of the annual world military expenditure figures by the Stockholm International Peace Research Institute (SIPRI). War tax resisters join street actions but also act in response to the 1982 statement by former Secretary of State Alexander Haig: “Let them march all they want as long as they pay their taxes.’

While some people make their protest by refusing just $1 of income taxes due, others refuse to send hundreds or thousands of dollars to the federal government. These people often say, “I pay my taxes, just not to the IRS,” because they donate the money to humanitarian groups. Many pool their refused taxes and hold ceremonies to give grants to organizations that fund human needs and peace and justice projects.

The Northern California People’s Life Fund will hold a granting ceremony on April 15 in Berkeley. Over $30,000 in grants will be made to groups including California Coalition for Women Prisoners, Community United Against Violence, Northridge Coop Community Garden, Western Institute for Social Research, and Youth Spirit Artworks. Life Fund member Jon Marley says, “We are excited to support such a wide array of groups doing excellent work in Northern California around social justice and peace. With so many families and neighborhoods in need of help, this is what our tax dollars should be going for, not endless war sponsored by the U.S. government.”

In Denver, Dr. Fosberry’s Tax Day Carnival offers a lively venue for “Discussion of Issues Pertaining to Taxation, the Publick Sphere, and The Pursuit of Happiness in Denver Town.” The circus will include a booth featuring a penny poll, where the public can cast a vote for how they want their tax dollars spent.

The National War Tax Resistance Coordinating Committee (NWTRCC), founded in 1982, is a coalition of local, regional and national groups providing information and support to people who are conscientious objectors to paying taxes for war. On social media NWTRCC is promoting #DearIRS and encouraging everyone to post messages about their own war tax resistance and also released a short video on YouTube and Vimeo called “Letters from War Tax Resisters,” featuring excerpts from letters sent to the IRS, family members, and the local newspaper.

See the list of tax day activities in the U.S.

War tax resisters are available for interviews. Please contact NWTRCC, 1-800-269-7464,nwtrcc@nwtrcc.org, for contacts in your area.

PDF version of this press release