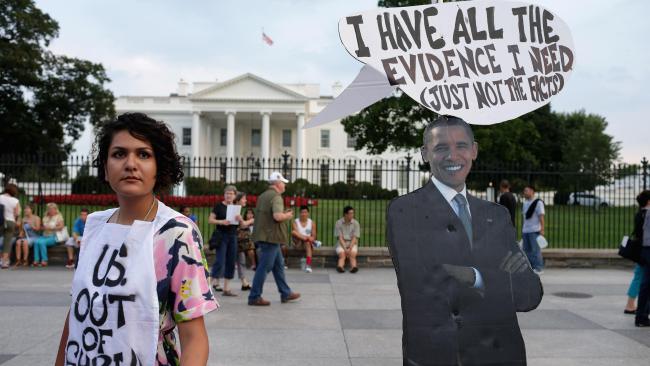 The document entitled “U.S. Government Assessment of the Syrian Government’s Use of Chemical Weapons on August 21, 2013”, released in tandem with public statements made by Secretary of State John Kerry, is merely a summary of a manufactured narrative designed to lead the US into yet another criminal and disastrous war in the Middle East. Having been released prior to even preliminary reports from UN chemical weapons investigators on the ground in Syria, the document is as much a work of fiction as it is fact.

It begins with the conclusion that “The United States Government assesses with high confidence that the Syrian government carried out a chemical weapons attack in the Damascus suburbs on August 21, 2013.” Naturally, one would immediately wonder how such a conclusion was reached when even the expert investigators on the ground have yet to conclude their own study. If these experts with years of training in the field of chemical weapons, toxicology, and other related disciplines, have yet to make such a determination, it would seem more than convenient that the US has already reached their own assessment.

Moreover, based on its own admissions as to the sources of this so-called “intelligence”, very serious doubt should be cast on such a dubious government report. The document explains that:

These all-source assessments are based on human, signals, and geospatial intelligence as well as a significant body of open-source reporting…In addition to US intelligence information, there are accounts from international and Syrian medical personnel; videos; witness accounts; thousands of social media reports from at least 12 different locations in the Damascus area; journalist accounts; and reports from highly credible non-governmental organizations.

First and foremost, any critical reading of this document must begin with the notions of “human intelligence” and “witness accounts”. Such terminology indicates that the US is simply basing pre-conceived conclusions on rebel sources and the much touted “activists” who seem to always be the sources quoted in Western media reports. Secondly, it is obvious that US officials have cherry-picked their eyewitness accounts as there are many, from both sides of the conflict, which directly contradict this so-called high-confidence assessment.

As reported in the Mint Press News by Associated Press reporter Dale Gavlak, Syrians from the town of Ghouta – the site of the chemical attack – tell a very different story from the one being told by the US government. Residents provide very credible testimony that “certain rebels received chemical weapons via the Saudi intelligence chief, Prince Bandar bin Sultan, and were responsible for carrying out the dealing gas attack.” What makes such testimony even more compelling is that it comes from anti-Assad Syrians, many of whom have seen their children die fighting Assad’s forces. One of the Ghouta residents described his conversations with his son, a fighter tasked with carrying the chemical weapons for the Nusra Front jihadi group, who spoke of Saudi-supplied weapons being unloaded and transported. His son later was killed, along with 12 other rebels, inside a tunnel used to store weapons.

It is essential to also dispute the very notion that “social media reports” constitute credible evidence to be used in making a case for war. It is a long-established fact that US and other intelligence agencies are able to manipulate twitter, Facebook and other social media in whatever way they see fit. As the Guardian reported back in 2011:

The US military is developing software that will let it secretly manipulate social media sites by using fake online personas to influence internet conversations and spread pro-American propaganda…each fake online persona must have a convincing background, history, and supporting details, and that up to 50 US-based controllers should be able to operate false identities from their workstations ‘without fear of being discovered by sophisticated adversaries.’

It seems as if the United States is now using social media, a system over which they have control, to justify their pre-fabricated war narrative. Additionally, the idea that videos constitute a shred of evidence is laughable. As any investigator can tell you, videos are easily manipulated and, even if they are untouched, they cannot be used to assess the culprit of a crime. Videos merely show what is visible, not the underlying motives, means, and opportunity – all part of genuine investigation.

Finally, one must feel serious apprehension at the idea of journalist reports as being part of this pastiche called a “high confidence assessment,” for the simple reason that Western coverage of the conflict in Syria is mostly coming from journalists outside the country or those already sympathetic to the rebel cause. Whether they are paid propagandists or simply convenient tools used as mouthpieces of the corporate media, their reports are highly suspect, and certainly should have no role in shaping war-making policy.

It is critical to examine the “intelligence information” referred to in the assessment. It would seem that, according to the document itself, much of the case for war is based on human intelligence. Many news outlets have reported that the entire case against Assad is being based on an intercepted phone call provided to US intelligence by none other than the Israelis. Israel, with its long track record of fabricating intelligence for the purposes of war-making, is not exactly a neutral observer. As one of the principal actors in the region calling for the overthrow of the Assad government, Tel Aviv has a vested interest in ensuring a US intervention in Syria.

The initial confirmation that the regime of Syrian President Bashar Assad was responsible for a chemical weapons attack Aug. 21 came from a tip from the Israeli intelligence service…a special unit of the Israeli Defense Force – an intelligence unit that goes by the number 8200…helped provide the intelligence intercepts that allowed the White House to conclude that the Assad regime was behind the attack.

It would seem rather convenient that one of the primary beneficiaries of a war to topple Assad would be the primary source of the sole piece of evidence purportedly linking Assad to the attack. If this strikes you as at best a flimsy pretext for war, you would be correct.

The report also outlines the way in which Washington arrived at its conclusion that Assad carried out the attacks. The document states:

We assess with high confidence that the Syrian government carried out the chemical weapons attack against opposition elements in the Damascus suburbs on August 21. We assess that the scenario in which the opposition executed the attack on August 21 is highly unlikely. The body of information used to make this assessment includes intelligence pertaining to the regime’s preparations for this attack and its means of delivery, multiple streams of intelligence about the attack itself and its effect, our post-attack observations, and the differences between the capabilities of the regime and the opposition.

In analyzing the above excerpt, it should be immediately clear to anyone who has been following events in Syria closely, that this conclusion is based on faulty premises and outright lies. First, the idea that it is “highly unlikely” that the chemical attack was carried out by the opposition is an impossible assertion to make given that there is abundant evidence that the “rebels” carried out chemical attacks previously. As the widely circulated video showing rebels mounting chemical weapons onto artillery shells demonstrates, not only do they have the capability and delivery system, they have a significant supply of chemicals, certainly enough to have carried out the attack. Moreover, the multiple massacres carried out by Nusra Front and other extremist rebel factions demonstrates that such groups have no compunction whatsoever about killing innocent civilians en masse.

As for the claim that the US has based their conclusions at least in part on “the regime’s preparations for this attack”, this too is a dubious assertion simply because there has been no evidence provided whatsoever to support it. Ostensibly, the United States would like international observers to “take their word for it” that they have such evidence, but the fragile public simply cannot be allowed to see it. More echoes of Bush’s lies before the Iraq War.

And the so-called “post-attack observations” are again suspect because, as I have previously noted, the US has not bothered to wait for the results of the UN chemical weapons investigation. Therefore, these observations could only come from anti-Assad sources on the ground or international observers not present at the site who merely repeat the same information fed to them from those same anti-regime sources.

As if intended as a cruel joke to the reader, the document points out that, despite the claim that this is an irrefutable, evidence-based conclusion, it is in fact based on nothing but hearsay and rumor. Buried at the end of the first page is the most important quote of all:

Our high confidence assessment is the strongest position that the U.S. Intelligence Community can take short of confirmation[emphasis added].

So, the US is supposed to wage war on a country that has not attacked it or any of its allies based on admittedly unconfirmed evidence? This would be laughable if it weren’t so utterly outrageous and criminal.

The “U.S. Government Assessment of the Syrian Government’s Use of Chemical Weapons on August 21, 2013” is a poorly constructed attempt to justify the politically, militarily, and morally unjustifiable war against Syria. It relies on lies, distortions, and obvious propaganda to create the myth that Assad is the devil incarnate and that the US, with its clear moral high-ground, must take it upon itself to once again wage war for the sake of peace. Nothing could be more dishonest. Nothing could be more disgusting. Nothing could be more American. Let’s hope Congress shuts it down.

Eric Draitser is an independent geopolitical analyst based in New York City. He is the founder of StopImperialism.com and a regular contributor to CounterPunch.