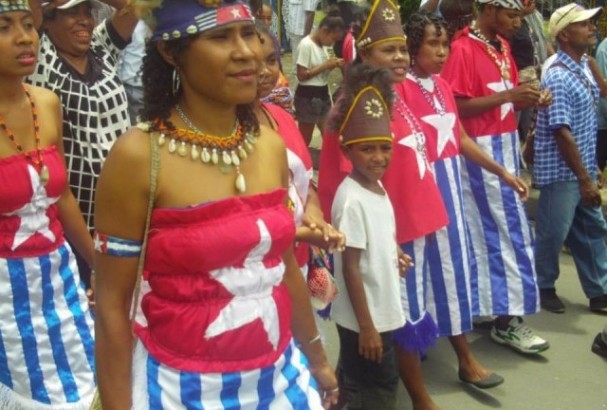 December 1 – More Than A Flag-Raising Day!

Less than 24 hours and December 1 will be here – the countdown for the anniversary of the raising of the Morning Star flag has begun. However, I want you to learn the truth about this particular day because it is more than a day when the Morning Star flag was hoisted for the first time in West Papua 54 years ago.

The Island of New Guinea is divided in to two: The west side is the independent state of Papua New Guinea, which gained its independence from Australia in 1975. The western part was known as “Western New Guinea,” which was colonized by the Netherlands since 1828.

December 1, 1961 and the Dutch Government Betrayal

By the end of 1961, the plan for West Papuan independence took its first step followed by betrayal. The Dutch government and the West Papuan Council raised the West Papuan morning star flag for the first time; a very emotional event for both groups. Leaders of both sides stood and watched the two flags flew next to each other as they embraced the beautiful Jayapura breeze. The plan for West Papuan independence took a tremendous leap, but what happened the following year shattered that promise and the dream of a free West Papua; it broke the hearts of West Papuans. The Dutch government decided to hand over West Papua to the United Nations. The ripple effect of that betrayal has been felt by generations down to our generation, and will continue to reverberate as long as that promise remained unfulfilled.

The Dutch government betrayed West Papuans in the 1962 and never looked back. The Dutch government at that time had an obligation to fulfill its responsibility for the territory: that is – declaring West Papua an independent state, assisting West Papuan leaders in the transitional process. Instead, it decided to walk away and handed over the control of West Papua to the United Nations. West Papuans suddenly found itself abandoned as their European colonial ruler; an European power which exerted control over West Papua for century, suddenly departed.

The United Nations and Indonesia orchestrated a sham referendum called the “Act of Free Choice” where a fraction of the West Papuan population were plucked from their homes, coerced to vote in favor of West Papua becoming a part of Indonesia. This dramatic transition from one colonial master to another colonial master is a crime against all international laws; something that the UN and the Dutch government refused to even acknowledge. Every year since 1962, leaders of the United Nations gathered and mourned about atrocities in the Middle East and other parts of the world, but one name they are all too happy to ignore is West Papua. The UN leadership thinks that by ignoring West Papua, their part in this evil plan to handover a nation of unique people from one colonial regime to another, will somehow go away… well, we are here and we aren’t going anywhere!

My appeal to all West Papuan supporters out there is this: As you raise the Morning Star flag, know that it wasn’t a declaration of Independence of West Papua, rather a promise yet to be fulfilled. I want you to raise the Morning Star flag as a call for the Dutch government to honor its promise for self-determination of West Papua. Raise the flag and talk about the betrayal of the West Papuan people who were conned into believing that their independence was just around the corner. And also use this opportunity to write to your government and bring this to their attention.

To the Dutch government

Finally, I want to thank supporters of West Papua across the world for their support for West Papua. And thank you for raising the awareness across the globe in your towns and on social media. As you raise theMorning Star flag, please remember that December 1, is a day we commemorate the failed promise of the Dutch government; the day the ‘Morning Star’ flag was hoisted and flew alongside the Dutch flag for the first time. This day should be used or at least treated as a day of mourning, a day to call for the fulfillment of that Dutch pledge.

With that, I thank you all from the bottom of my heart!