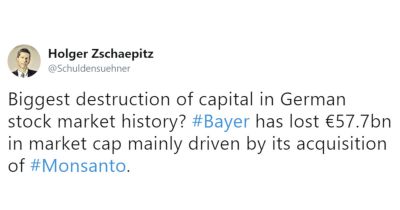 When the judge in the Monsanto Roundup trial signaled she might overturn the jury’s verdict, we expected the worst.

In the end, Judge Suzanne Bolanos slashed the amount of money the jury said Monsanto should pay its victim, Dewayne “Lee” Johnson, from $289 million to $78 million.

That may not sound like much of a win, but there was good news in her decision: The jury’s guilty verdict was upheld.

What Monsanto really wanted was for Bolanos to throw out the jury’s unanimous decision that Monsanto’s wildly profitable flagship weedkiller caused Johnson’s cancer, and that Monsanto knew all along that Roundup is a carcinogen.

It was not great news for Johnson, but better news than those of us rooting for him expected.

Who, besides Monsanto’s lawyers, didn’t think the decision handed down by Bolanos on Monday, October 22 was good news? Monsanto’s new owner, Bayer.

Let’s do the math. There are thousands of lawsuits, similar to Johnson’s, alleging Roundup causes cancer. News reports put the number at between 8,000 – 9,000 such lawsuits currently pending in U.S. courts.

Bayer shareholders quickly did the math.  According to one report:

Ian Hilliker, an analyst at Jefferies LLC in London, estimated in a note to clients that based on a class action lawsuit involving 8,700 plaintiffs believed to have cancer as a result of glyphosate exposure, Monsanto’s liability could reach $800 billion dollars. To put this in perspective, the original Bayer-Monsanto buyout offer was $57 billion dollars. Clearly, this no longer looks like an “asset” to Bayer and its stockholders.

Indeed. One German analyst tweeted that Bayer’s acquisition may have precipitated the “largest destruction of market capitalization in German stock market history.” The analyst estimated that Bayer’s losses so far stand at about 57.7 billion Euros ($65.8 billion in U.S. dollars) so far.

In the end, no verdict, no amount of money, will make Dewayne Johnson’s terminal non-Hodgkin lymphoma go away.

But the verdict, even in its diminished form, provides hope that with continued pressure, with more trials, with more financial losses for Monsanto-Bayer, truth and science may one day prevail.

OCA, along with many other good organizations, is calling on schools throughout the country to ban Roundup, in honor of Johnson, a former school groundskeeper, who bravely stood up to Monsanto. Some schools have already stepped up to the plate, including California’s Benicia Unified School District, where Johnson worked before he was diagnosed with cancer.

We’ll have more soon on our campaign to get Roundup out of schools, and how you can help. For now, please take the following actions:

SIGN THE PETITION: Tell the National School Boards Association: Get Monsanto’s Roundup out of schools!

Help us identify schools that use Roundup and other pesticides

Print this flyer and share with you school board, PTA and other parents