What Will It Take To Declare A Climate Emergency? 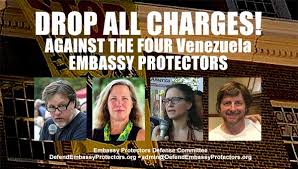 The Embassy Protectors Defense Committee is calling on the US State Department to drop the federal charges against us. On May 16, federal forces invaded the Venezuelan Embassy in Washington, DC in violation of the Vienna Convention and arrested four Embassy Protectors even though we were there with permission of the elected government of Venezuela.

Visit www.DefendEmbassyProtectors.org to send them an email, learn more and donate to the defense fund.

The Earth’s lungs are on fire. Forest fires are burning in greater numbers and with greater frequency and intensity than in the past. They are fueled not just by conditions connected to the climate crisis, such as drought and intense storms, but also by unfettered exploitation for profit.

We are living in a climate emergency without an emergency response. At a time when fossil fuels must be kept in the ground, the United States is increasing extraction of oil and gas and is rapidly becoming the world’s greatest climate threat. The corporate duopoly parties are slow to respond.

This week, we look at efforts by activists to raise awareness of the climate emergency and to directly confront those who are responsible for it.

Burning down our home

The Amazon Rainforest, which produces 20% of the world’s oxygen and has sequestered as much as 25% of the carbon from fossil fuel use worldwide, is now burning at an increased rate. There are 84% more forest fires in the Amazon this year than during the same period in 2018. Fires are destroying old-growth forests and releasing carbon into the atmosphere. Each acre of rainforest lost means less capacity to serve as a carbon sink, less production of oxygen and less biodiversity, functions critical for survival.

This increase in fires can be directly attributed to changes in policies under the Bolsonaro administration. Environmental protection standards have not been enforced and stripping land for cattle has increased. As a result, Norway and Germany, which have invested millions of dollars to protect the Amazon, are pulling their funding from Brazil.

While Bolsonaro lets the fires rage and even jokes about it by referring to himself as “Nero,” the Bolivian government is acting quickly to put out the fires that have crossed its borders. They purchased aircraft to assist with evacuations and carry water and they deployed troops to help firefighters. Activists around the world protested outside Brazilian Embassies on Friday to pressure its government to take action.

Fires are also burning in the Arctic, in Alaska, Canada, and Siberia. Nancy Fresco from the University of Alaska reports, “The evidence shows that overall, fires in the far North are becoming bigger, hotter and more frequent. …As these [carbon] releases fuel further warming, climate change is causing more climate change, which affects the entire planet.”

Adding fuel to the fire 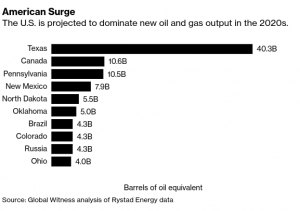 A quarter of the US’ new fossil fuel production is expected to occur on federal land and the other three quarters will be on private land. Global Witness recommends a moratorium on drilling public lands and ending fossil fuel subsidies to private companies.

Activists aren’t waiting for these policy changes. Protests and other acts of resistance to new fossil fuel infrastructure continue. In Minnesota, people locked down to the gates of an Enbridge office, halting work on the Line 3 pipeline that will carry tar sands oil. The Standing Rock Sioux continue to fight the Dakota Access Pipeline. Recently, they filed a new motion in court against the pipeline because the environmental study used to support Energy Transfer Partner’s permit was flawed. The company is seeking to double the volume of oil it is transporting even though the current pipeline has leaked at least ten times since it opened in 2017.

Pipeline fighters in Maryland had a victory this week when a judge denied TransCanada’s attempt to use eminent domain to gain access to land that is part of a public rail trail, a perversion of the whole concept of eminent domain that was viewed as a threat to Maryland’s sovereignty. And pipeline fights continue against the Mountain Valley Pipeline in Virginia and against the Bayou Bridge Pipeline in Louisiana.

Multiple groups have been pushing candidates to support a major mobilization to address the climate crisis through a green economy, akin to the transformation to a war economy achieved during World War II. At that time, factories switched from making consumer goods to making military equipment and weapons. Many people contributed to the effort by rationing goods, gathering scrap materials, planting victory gardens and learning new skills.

This year, the Sunrise Movement, which champions the idea of a Green New Deal, has been pushing the Democratic National Committee to hold a specific presidential debate on the climate crisis. The DNC voted down a resolution in support of such a debate over the weekend even though climate activists stormed the room and protested the vote.

Daphne Wysham reminds us that the failures to address the climate crisis are bipartisan. Although oil and gas companies are scrambling for investors, a new study by the Center for Sustainable Economy found that Democrat Tim Geithner and Republican Richard Kayne are financing new oil terminals in Oregon. Of course, it was President Obama who takes credit for expanding oil and gas production in the US, and around the world, and President Trump who is continuing the expansion. We outlined the presidential misleadership on climate by the Obama and Bush administrations. Amy Westervelt shares a letter written to President Carter in 1977 by Frank Press warning of climate catastrophe. 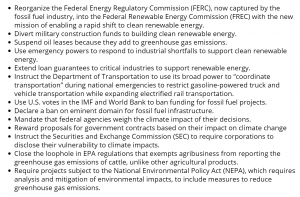 Howie Hawkins, a candidate seeking the Green Party nomination for president who brought the idea of the Green New Deal to the United States, wrote this week that the next president must declare a climate emergency on Day One in office, just as Trump did with the border wall. Hawkins explains that declaring a climate emergency gives the president the power to take significant actions, which he lists (see image to the right). Hawkins also calls for an Office of Climate Mobilization and investment in the Global Green New Deal.

Hawkins has put forward his own version of the Green New Deal that includes cutting military spending by 75%. This would not only make more funds available for necessary projects, but it would also limit the military’s ability to be the greatest single user of fossil fuels on the planet.

This week, Bernie Sanders put forward the best climate proposal of all Democratic candidates seeking the nomination thus far. His plan includes a series of positive steps but he still needs to be pushed for more. Sanders would move to clean, sustainable electricity by 2030 but it is not until 2050 that he calls for an end to the fossil fuel economy. This is not consistent with climate science. Sanders only vaguely confronts the biggest polluter on the planet, the Pentagon.

J. P. Sottile writes that we have to confront militarism to address the climate crisis. Not only are wars fought for oil, but military vessels defend waterways so that oil and gas can be transported. He describes the negative military-fossil-fuel-industrial cycle:

“…every year the U.S. political system reflexively funds a world-dominating defense budget that directly benefits the oil industry, client states and the entire hydrocarbon-based economy. Basically, it’s a global protection racket that generates huge profits for defense companies that sell weapons to the Pentagon. And the U.S. government also pushes arms sales abroad, particularly to oil-rich clients like those in the Middle East. All of those arms sales sustain thousands of jobs in states and congressional districts around the U.S. That, in turn, creates constituencies for members of Congress who collect millions in campaign contributions from both the defense and oil industries to make sure they can maintain de facto subsides for their weapons and their oil. Taxpayers and consumers complete the circuit through their “contributions” to the empire’s public-private partnership: They get to keep on buying oil, gas and plastic, while paying taxes for the military. It’s a perpetual ATM fueled by oil.”

JOIN THE PEOPLE’S MOBILIZATION TO STOP THE US WAR MACHINE AND SAVE THE PLANET. September 20 to 23 in New York City.

What about the future?

The next decade is full of threats and full of potential. There is much that needs to change but it is up to us to change it.

The climate crisis is here. We need to take action now because we are already behind in the game. On September 20, there will be a climate strike led by youth. We urge you to support it no matter your age. See StrikeWithUs.org. The Extinction Rebellion is planning a fall of resistance beginning with the strike on September 20 and lasting into October. See ExtinctionRebellion.US. These are both global initiatives.

Connected to the climate crisis are other great threats – the United States stoking conflict with Great Powers, including Russia and China and driving other countries to obtain nuclear weapons to protect themselves from western powers are moving us closer to the possibility of a nuclear war. Underlying the climate crisis is the capitalist economic system that values profit over life and protection of the planet. This system is literally fueling fires in the Amazon. Extreme wealth inequality and exploitation are inciting unrest, which is then used to justify surveillance and repression. We are in a hot mess in more ways than one.

There are signs for optimism. More and more, various movements are discovering their relationships to each other and are collaborating on actions. This is critical to learn from each other and to build the popular power necessary to shift what is possible.

These crises are also opportunities for tremendous transformation. People around the world are experimenting with new ways of living and structuring our societies. Brian Tokar of the Institute for Social Ecology describes local initiatives and how they can be scaled up regionally and globally. The Zapatistas recently announced the expansion of autonomous municipalities in Chiapas. Activists in France and Puerto Rico are creating direct democratic structures through general assemblies to make decisions about their future.

We have the opportunity now to think outside the box. To organize in our communities and connect with others throughout the country and around the world. We are building solidarity from person to person across movements and across borders. Together we have the power to create a new world.