On a bustling spring Sunday, with the Brooklyn Botanic Garden’s Cherry Blossom Festival and the Brooklyn Museum’s popular David Bowie exhibit in full swing, some 65 protesters from 20 different New York City activist groups descended upon the museum for a lively demonstration against “imperial plunder,” among other things.

Purchasing tickets and entering in small groups, activists surreptitiously gathered in the Brooklyn Museum’s grand third floor atrium. At the sound of a whistle, the cavernous chamber was suddenly flooded with noise and movement, as demonstrators unfurled huge painted banners from the floor above, singing, and passing out leaflets to curious museum-goers.

Through a series of mic checks led by protester Shellyne Rodriguez, the coalition issued their list of demands, which include diversifying museum staff, removing Board President David Berliner (a former real estate COO), a commitment from the museum to mitigate gentrification, and acknowledge the full history of the museum’s holdings and even the land the building occupies.

“This museum houses collections obtained through imperial plunder,” said Rodriguez, an organizer with Decolonize This Place. “Diverse programming is not enough! It is cosmetic solidarity. The museum wants our art, our culture, but not our people.”

The museum sparked an uproar earlier this month with the appointment of Kristen Windmuller-Luna, who is white, to serve as consulting curator of the museum’s African art collection. In response, Decolonize This Place released an angry open letter to the museum, calling the hire “tone deaf” and declaring that “the hue and cry over this hire has brought to light a major disconnect between the governance of the museum and the communities of Brooklyn whom the institution is obliged to serve.” 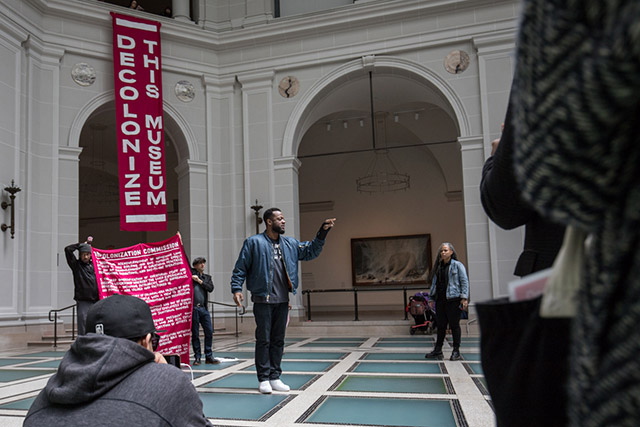 Sunday’s protest was the latest escalation in an ongoing effort by the activist coalition to bring the Brooklyn Museum and Botanical Gardens to the table to discuss forming a Decolonization Commission, an anti-gentrification initiative, and to generally better reflect and protect the diversity of the surrounding neighborhoods, which include Crown Heights and Prospect Heights.

The coalition of grassroots activist groups, which includes the Brooklyn Anti-Gentrification Network, Equality for Flatbush, the American Indian Community House, the Black Youth project 100 and others, has been undertaking similar “decolonization protests” at cultural institutions throughout the city for years, including the American Museum of Natural History in 2016 and 2017.

The Brooklyn Museum’s director, Anne Pasternak, has emphatically defended the appointment of Dr. Windmuller-Luna, 31, calling her an “extraordinary candidate with stellar qualifications.” In a press release, the museum announced that Dr. Windmuller-Luna mission would be to “assess and rethink the Brooklyn Museum’s extensive holdings of African art, which is comprised of more than 6,000 objects, and organize an innovative, freshly conceived temporary installation showcasing the breadth and depth of the collection.”

Nigerian-American curator and scholar Okwui Enwezor has also defended the appointment of Windmuller-Luna, his former student, writing, “The criticism around her appointment can be described as arbitrary at best, and chilling at worst. There is no place in the field of African art for such a reductive view of art scholarship according to which qualified and dedicated scholars like Kristen should be disqualified by her being white, and a woman.”

“It was never about the white curator, not really,” LaShaun Ellis, a Crown Heights resident and founding member of Flower Lovers Against Corruption, said Sunday. “It’s about changing the language on placards to acknowledge how art was acquired, what that means in a historical perspective—not ignoring the past in that way. Have a plaque that says, ‘this was Lenape land.’” 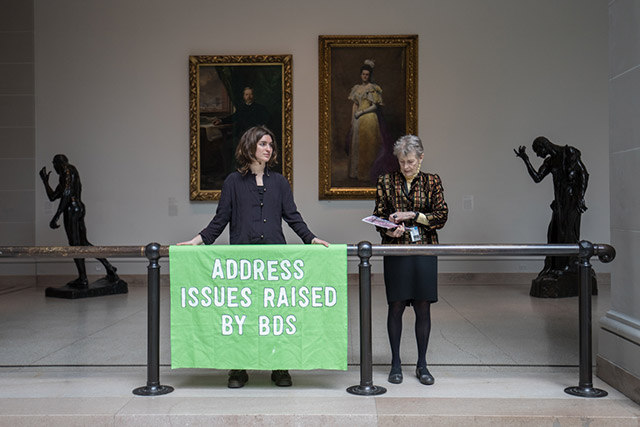 “If there’s a large Black and Latino community living here, then there should be jobs for that community within the institution,” said Antonio Senaa of the People’s Cultural Plan “There should be transparent goals: say, ‘we’ll hire ten curators of color within the next ten years. That way they can be held accountable, not just say, oh we’re diversifying.”

“If they’re hiring people within the community, there may be less of the pro-gentrification movement, too,” he added.

After several speeches in the atrium, the protesters moved through the museum, down the stairs to the lobby, chanting and carrying their banners. (Security followed close behind but did not forcibly eject the demonstrators.) In the museum lobby, activists found a more captive audience: a long line of visitors waiting to buy tickets.

Gail Flannery, an artist, local resident and member of the museum, was supportive—and hopeful. “It’s really important, what they’re saying,” she said. “And because this is one of the more progressive institutions, it may be a really good place to start.”

“It’s important to think about the greater context the art here is being presented in,” agreed another museum visitor who asked that her name be withheld. “I’m here for the Radical Women Latin American Art exhibit and it’s great for there to be that radical place, and this living radical space here as well.” 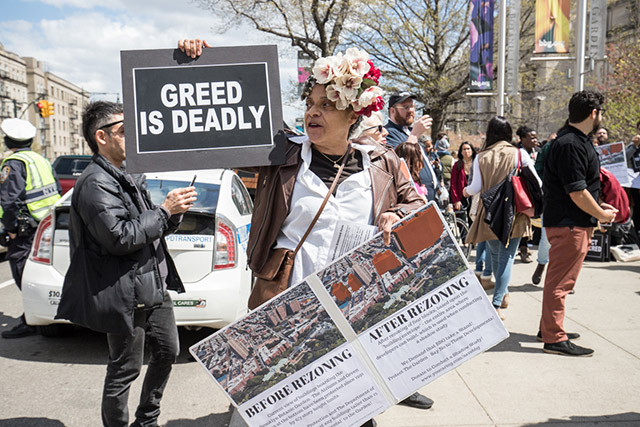 After leaving the museum, protesters gathered in front of one entrance to the Brooklyn Botanic Garden, which was bustling with people in cosplay costumes attending the Cherry Blossom Festival. There, activists decried plans to build a 42-story luxury high-rise overlooking the Brooklyn Botanical Gardens.

“Like the cherry blossom trees that are so alluring at the Garden this time of year, a movement is now blossoming to reclaim and decolonize this place,” their leaflets read. “In the spirit of Spring Renewal, we urge the museum’s leadership to participate in this process.”

The coalition said that following the protest, a representative of the Brooklyn Botanic Garden has agreed to a future meeting with the Movement to Protect the People, the activist group leading the garden efforts.