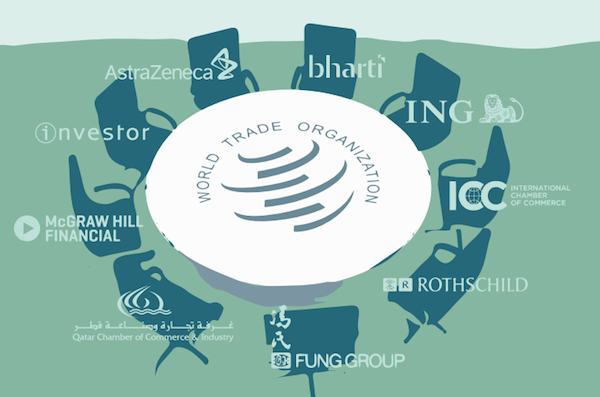 Deepening TNCs Gains From The WTO

This sequel to the “Tailored for Sharks” report delves deeper into the role the World Trade Organization (WTO) and its legal system play in the corporate architecture that benefits and protects interests of Transnational Corporations (TNCs); details concrete examples of TNCs behind trade disputes; and presents the post-Bali corporate roadmap.

Big Corporations, the Bali Package and Beyond (pdf, 877KB)

It is almost a year since the WTO Bali Ministerial where the Trade Facilitation Agreement was greeted with dismay by social movements and civil society organisations and with much acclaim by most governments and by Transnational Corporations and their associations. The International Chamber of Commerce (ICC) was first to congratulate WTO Director General Azevedo and the WTO Members on the deal. ICC Chairman Harold McGraw stated after the Bali Ministerial, “Our efforts to push governments to show the political will needed to conclude a deal here have paid off.”

“Big Corporations, the Bali Package and Beyond: Deepening TNCs gains from the WTO”  revisits the WTO Bali Package and analyses the WTO from the perspective of corporate capture by the interests of Big Business and identifies key features of the post Bali WTO corporate road map.

The media has given necessary attention to the considerable delay in the governments’ sign-off on the Bali package due to disagreements on the temporary ‘peace’ reprieve  given to India and other developing countries on their right and responsibility to stockpile basic food staples for their citizens. This publication on the other hand focuses on the strategic implication of the outcomes of the Bali package for the benefit of corporations  – analysing the post Bali corporate priorities such as- an international Trade Agreement on  Services; a multilateral agreement on Investment; an agreement on environmental goods and services; bringing the Regional Trade Agreements under the  WTO umbrella. It also exposes the WTO’s Dispute Settlement Mechanism (DSM) as the ‘crown jewel’ ensuring adherence to the corporate agenda in the WTO.

This report, a sequel to the “Tailored for Sharks” published in 2013, delves deeper into the role the World Trade Organization (WTO) and its legal system play in the corporate architecture that benefits and protects interests of Transnational Corporations (TNCs); details concrete examples of TNCs behind trade disputes; and presents the post-Bali corporate roadmap.

The “historic” first agreement of the WTO at the December 2013 Bali Ministerial, after years of stalemate in multilateral trade negotiations, is a prime example of how WTO trade rules favor TNCs. The Bali Package has several elements but the centerpiece is the legally binding agreement: the Agreement on Trade Facilitation. The deal on agriculture is a weak and watered down peace clause – a temporary measure – that grants a short-term reprieve for developing country governments to provide support to their poor farmers and constituents without getting sued under the WTO Dispute Settlement Mechanism (DSM). The entire section on special and differential treatment and concerns of Least Developed Countries (LDCs) are all declarations and promises for future action. The Agreement on Trade Facilitation, however, in stark contrast, is legally binding and once it hurdles the current stalemate in Geneva will be legally adopted, ratified and included as an Annex into the “Marrakesh Agreement Establishing the WTO,” and thus will be legally enforced and guaranteed by the all-powerful WTO DSM. It is unclear how long India and other developing countries will hold their stand to not sign off on the adoption of the Trade Facilitation Agreement in exchange for the speeding up of the process for a permanent solution in Agriculture.

The clear winners of the Bali Package are transnational corporations (TNCs). TNCs, who control the global supply chains across the world, will gain the most from an Agreement that slashes costs and relaxes customs procedures, easing the flow of imports and exports. The 2010 UNCTAD World Investment report details that, “by 2009, it was estimated that there were 82,000 multinationals in operation, controlling more than 810,000 subsidiaries worldwide. Upwards of two-thirds of world trade now takes place within multinational companies or their suppliers – underlining the growing importance of global supply chains.” The world’s largest business organization, the International Chamber of Commerce (ICC), with past and present leaders from corporate financial giants such as Rothschild Europe, McGraw Hill Financial and others, was first to congratulate WTO Director General Azevedo and the WTO Members on the deal, Chairman Harold McGraw stated after the Bali Ministerial, “Our efforts to push governments to show the political will needed to conclude a deal here have paid off.” Their commissioned study touts 1 trillion US dollars in gains for the world GDP, a calculation that other economists have questioned. Questions have also been raised on the quality of work that developing countries gain from being employed in the low-value capture ends of these global value chains (GVCs).  –

This report also raises the alarm bells related to the coming post-Bali corporate roadmap. TNCs have already made clear in their World Trade Agenda that they are looking to enter new areas for profit expansion. Hence the determined impetus to conclude the Bali deal at a time when world trade was slowing to a crawl of only 2.5 percent. There is still a brave new world for big business to conquer through the WTO. That agenda includes: (1) an international trade agreement on services – wider and more expansive than the current General Agreement on Trade in Services (GATS), (2) a multilateral framework agreement on investment, (3) an agreement on environmental goods and services and (4) bringing the “gains” made by TNCs in Regional Trade Agreements under the multilateral framework of the WTO. Advances in the Trans-Pacific Partnership Agreement (TTP) and the Transatlantic Trade and Investment Partnership (TTIP) are also encouraged and welcomed by the ICC, but notes that these developments should reinforce further trade liberalization under a multilateral framework.

At a time of intense focus on the latest round of Free Trade Agreements – the TTP and the TTIP – it  is important to  indicate that all these agreements whether stand alone or in the context of the WTO are part of a legally binding architecture privileging corporate interests.