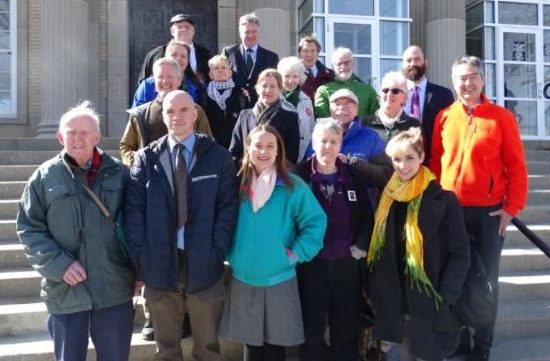 Massachusetts – On March 27, 13 defendants went into the West Roxbury District courthouse to answer charges related to their arrests protesting the West Roxbury Massachusetts Lateral Pipeline. They expected to have charges against them reduced to civil infractions — the equivalent of a parking ticket. While finding no grounds to deny that motion from the prosecution, the judge chose to let each defendant testify briefly on the necessity of their actions.

The defendants collectively presented a powerful and comprehensive argument for why it was necessary to engage in civil disobedience to stop the imminent local and global harms of this fracked gas pipeline. Following their testimony, the judge acquitted ALL the defendants by reason of necessity.

While defendants in this case were still denied a jury trial and the possibility of presenting a full necessity defense, this was the first time that we know of that defendants were acquitted based on climate necessity. The defendants told the story of the campaign against the West Roxbury Lateral Pipeline and how their actions were justified by the threat of climate change.

Lawyers for the 13 activists suggested there may even have been a “cause and effect” – that charges were reduced in order to avoid the trial for which the defendants, their legal team, eight expert witnesses, and many supporters had prepared.

Activists said they were disappointed that they would not get the chance to present their case to a jury of their peers, but not disheartened. “The attempt to take these cases to trial was a long shot,” said Marla Marcum, co-founder of the Climate Disobedience Center and a spokesperson for the group. “As climate activists in 2018, we know that long shots and moral imagination are some of the most promising tools for culture-shifting transformation.”

With the judge dismissing the charges, the campaign was a success even without the trial. As Nathan Phillips, a professor in the Earth and Environment Department at Boston University and one of the defendants, said “We forced Spectra to admit to the judge that they did not have and do not have a safety plan for the West Roxbury Lateral pipeline and likely any projects going forward.”

The result in this case is an important part of building power to fight the fossil fuel industry. Climate justice advocates told their story not just in court but from the way they created their protest, which included “Digging Mass Graves” to highlight the dangers of climate change. 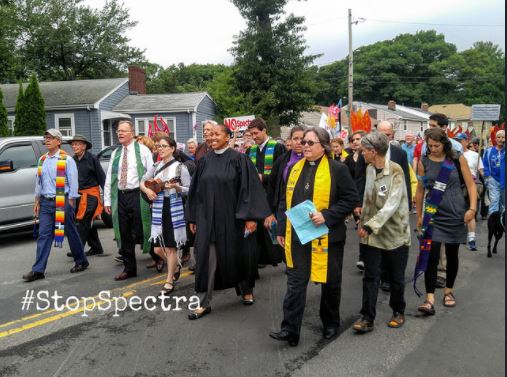 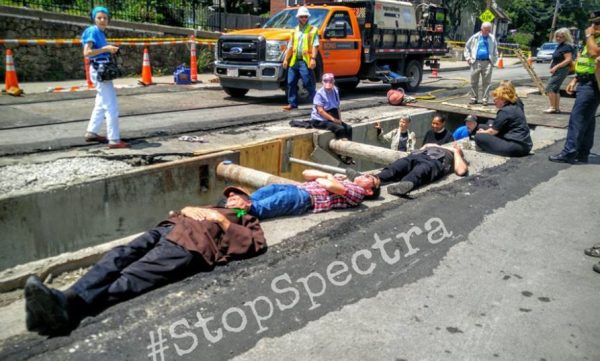 West Roxbury pipeline protest dramatized the mass deaths that climate change will occur and the necessity of stopping climate infrastructure.

“What we stood for is true, and that truth is in the process of coming to light, regardless of the fact that the system is unable to fully hear it right now,” said Karenna Gore, daughter of former Vice President Al Gore and Director of the Center for Earth Ethics of at Union Theological Seminary in New York.

Activists continued to tell their story after the protest. See this blog from Tim DeChristopher, and by Rev. Lara Hoke. The participants consistently made the point that they restated before the court — there is an urgent necessity to stop building carbon infrastructure as climate change will kill millions of people and cause immense environmental damage.

This protest and refusal to accept a plea bargain built the movement’s power and demonstrated the violence of carbon energy infrastructure projects.

The defendants were among roughly 200 protesters who had been arrested as part of a massive campaign against this pipeline, beginning in mid 2015. Initially concerned with local  safety– the risk of locating a high pressure facility in a densely-populated neighborhood and across the street from an active blasting quarry—protesters gained support from Boston Mayor Walsh and the entire Boston City Council, Congressman Lynch, Senators Markey and Warren, State Representative Coppinger and State Senator Rush, as well as residents and officials from the Town of Dedham through which the pipeline also runs.

This is not just one protest but part of a national resistance movement for climate justice with activists taking action across the country to stop carbon energy infrastructure and extraction of oil and gas. We urge you to share this report so tens of thousands of people will see principled climate disobedience actions as one kind of necessary leadership in a time when our regulatory systems and our government are owned by the fossil fuel industry. We hope this action will inspire more people to take direct action, risk arrest, and pursue novel legal strategies.

The Climate Disobedience Center provides a guide for activists on how to use the tool of the necessity defense in climate cases. It defines climate necessity as: “The climate necessity defense is an argument made by a criminal defendant to justify action taken on behalf of the planet. It’s offered by activists who have been arrested for protesting fossil fuel extraction and government inaction on climate policy.” [Emphasis in original] The necessity defense is a long-time defense used in civil disobedience cases where activists argue that their violation of the law should not result in conviction because they were acting out of necessity to prevent a greater harm. In climate cases, the argument is the impacts of climate change are so serious that breaking the law is necessary to avert them.

The trial was supported by Climate Disobedience Center, the Massachusetts Chapter of the National Lawyers Guild, Climate Defense Project, and 198 Methods.

For more information visit the Climate Disobedience Center and Stop the West Roxbury Lateral. The above report is based in part on the press release from the defendants.