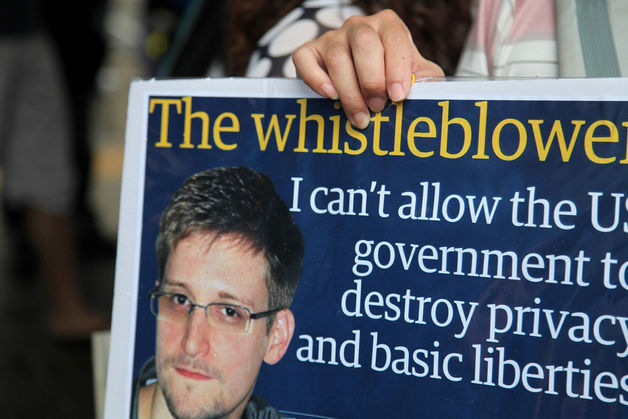 Defending Our ‘Right To Know’ With Courage

Snowden: the Courage Foundation is “a new rapid response team for global democracy.”

On June 11th in Berlin, a new international organization was announced whose purpose is to (1) defend whistleblowers when they are facing prosecution; and (2) defend the public’s right to know. Courage launched with a new campaign designed to ensure the ongoing safety of its first beneficiary, NSA whistleblower Edward Snowden.

The right to know is recognized in Article 19 of the Universal Declaration of Human Rights and consistent with the First Amendment to the US Constitution. The importance of the right to know has become more widely understood thanks to recent whistleblowers, Chelsea Manning and Edward Snowden. They exposed harsh secrets about the way the US government behaves in its militaristic foreign policy and how intelligence agencies conduct dragnet surveillance of communications. As Courage says in its mission statement:

“When powerful institutions retreat into secrecy, they prevent proper accountability and oversight. Whistleblowers become the public’s regulators of last resort. Without them, we would know far less about international diplomacy, offshore banking or the excesses of the War on Terror.

“Because whistleblowers are a vital link in the chain, they are also vulnerable. Courage upholds the principle of public access by aiding the whistleblowers who make it possible, forcing their cases into the public sphere and funding effective defences in the courtroom.”

I joined the advisory board of the Courage Foundation because shining a light on government secrets will educate people to change the direction of government for the better. There is no question that secrecy has cost more lives than transparency and that secrecy has led to policy blunders that are often illegal, unethical and counterproductive. Our right to know is foundational to a free and democratic society.

The Acting Director of Courage is Sarah Harrison. She is the Wikileaks Investigation Editor and escorted Edward Snowden to political asylum in Russia.  She explained her support for Snowden and work at Courage in a video which she describes how “Snowden and other whistleblowers do this world a great service” and then are threatened by the United States government with decades in prison for merely exposing truths that we should be aware of.  She believes Snowden and other whistleblowers should be protected, indeed the first mission of Courage it to raise money for their defense.  She believes the people should “show another example” and stand with whistleblowers like Snowden.

Harrison has shown the kind of courage that we hope to see in many by putting her liberty on the line in order to help protect Edward Snowden. Other advisory board members of Courage have also risked everything for the public’s right to know. Daniel Ellsberg, the well-known Vietnam War whistleblower who leaked the Pentagon Papers is one example. Ellsberg has described Snowden as “a great hero. He’s the kind of person that makes me proud.” He recalls how “everything that was said about Snowden – that he is a traitor and a spy – was said about me.”

In a video to the Courage Foundation opening announcement Edward Snowden described how we need to confront surveillance because in order to participate in a democratic government we need to know “what the government is doing to us and what they are doing in our name.”  It the people are not informed about what the government is doing “the government becomes a force unto itself not a public servant but a public master.”  Snowden believes that public officials who take illegal or unethical action must be held accountable.

Snowden goes on to say that since government is not protecting whistleblowers we must say “we will protect them as a global society.” For him the Courage Foundation is “a new rapid response team for global democracy” saying now, when “we see someone facing unjustified retaliation for performing a public service we can rally to their defense.”

Glenn Greenwald explained his support for Courage and Edward Snowden saying that he is a journalist who relies on “brave individuals who come forward and blow the whistle on secret wrongdoing by those who wield great power.” He recognizes Snowden as “one of the bravest and most consequential, and whose rights are being threatened every day.”

Law professor Eben Moglen who directs the Software Freedom Law Center says he does this work and has joined the advisory board of Courage because “mass surveillance threatens democracy.” He points out how “for the last decade two vastly unwise administrations” have pursued these “procedures of totalitarianism on everyone, everywhere.”  These dangerous dragnet surveillance tools have been developed in secret. He points out that “without Edward Snowden, democracy in the United States would have been severely wounded.”

Gavin MacFayden, who is a trustee of Courage and helped found the organization, is the Director of the Center for Investigative Journalism.  He describes Courage as “the most important single support organization for whistleblowers.” Also on the board of trustees for Courage are Julian Assange, the editor-in-chief of Wikileaks and Barbora Bukovská, Senior Director for Law and Policy at Article 19.  Courage hosts the only legal defense fund endorsed by Edward Snowden and his lawyers. You can support Snowden’s legal defense here.

What kind of risks do whistleblowers take? Courage writes they face a range of consequences and reprisals including:

–         Financial: burden of extensive legal costs and the loss of income

Courage “prepares legal defense funds, lawyers and campaigns to defend whistleblowers in court and campaign for their freedom and protection. Courage will publicize any negative consequences imposed on these truthtellers and ensure their plight is not ignored in the press. If sufficiently funded and prepared, Courage can prevent the next whistleblower from becoming the next political prisoner.”

Right now, an immediate threat to Edward Snowden is his temporary asylum in Russia ends on July 31, 2014. Courage is seeking to have his political asylum extended or to have another country provide political protection to Snowden by showing worldwide support for him. People are being asked to submit photos saying they support Edward Snowden and saying what city they are from.  You can submit your photo here.

We can overcome the surveillance and other abuses of the security state, including the abusive dragnet searches of the US National Security Agency. Courage is an important vehicle for that effort.  One year after Edward Snowden’s historic action people are mobilizing. Popular Resistance was part of the Reset the Net campaign, which Edward Snowden supported, and which had an epic impact including changes made to improve Internet security that “will affect 3 billion emails each month, 500,000 users each month, 187 million blogs and 14.5 billion web pages.”

And, we are seeing more safe avenues for whistleblowers being created. SecureDrop, built by the Free Press Foundation out of the legacy of Aaron Swartz, is now being used by a variety of news outlets including The Guardian, New Yorker, ProPublica and The Intercept as well as a new non-profit, ExposeFacts.org. This builds on the excellent ongoing work of Wikileaks that makes it possible for whistleblowers to expose the truth safely.

More needs to be done. As Edward Snowden said in his message to Courage, “the level of success or failure depends on our solidarity.” We all need to take action to protect the privacy of our communications in the 21st Century. Edward Snowden showed us that we were under surveillance, now we must take concerted action to re-take our privacy and set the terms for free speech in the 21st Century.

Kevin Zeese, a member of the Courage Foundation advisory board, is an organizer of Popular Resistance and serves on the Steering Committee of the Chelsea Manning Support Network. He also serves as Attorney General for the Green Shadow Cabinet.