Note: Independent UN rights experts on Thursday said the arrest of Wikileaks co-founder Julian Assange by police in the United Kingdom after the Ecuadorian Government decided to stop granting him asylum in their London embassy, exposed him to “the risk of serious human rights violations” if extradited to the United States.

These views are consistent with a series of actions and statements by the UN which has sided with Assange throughout this threat of prosecution and his nearly seven years as a refuge in the Ecuadorian embassy.

Special Rapporteur on extra-judicial executions, Agnes Callamard, said “expelling Assange from the Embassy” and allowing his arrest, it had taken Mr. Assange “one step closer to extradition.” She added that the UK had now arbitrarily-detained the controversial anti-secrecy journalist and campaigner, “possibly endangering his life.”

The UN independent expert on the right to privacy, Joe Cannataci, issued a statement following the arrest, saying that “this will not stop my efforts to assess Mr. Assange’s claims that his privacy has been violated. All it means is that, instead of visiting Mr Assange and speaking to him at the Embassy…I intend to visit him and speak to him wherever he may be detained.”

In a statement last Friday, Special Rapporteur on torture, Nils Melzer, said he was alarmed by reports that an arrest was imminent, and that if extradited, Mr. Assange could be exposed to “a real risk of serious violations of his human rights, including his freedom of expression, his right to a fair trial, and the prohibition of cruel, inhuman or degrading treatment or punishment.”

Last December, the UN Working Group on Arbitrary Detention, urged the UK to “abide by its international obligations” and allow Mr. Assange safe passage out of the embassy.  The Working Group concluded in its opinion No. 54/2015 that Assange was being arbitrarily deprived of his freedom and demanded that he be released. “Under international law, pre-trial detention must be only imposed in limited instanices. Detention during investigations must be even more limited, especially in the absence of any charge”  KZ 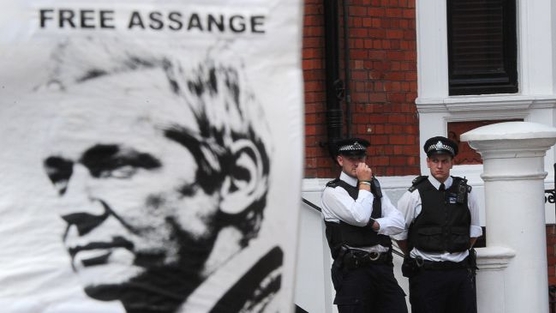 The Indictment of Assange Criminalizes Journalism

Earlier this morning, London police entered the Ecuadorian embassy and arrested Julian Assange. This was in response to a US extradition request. Assange is expected to be extradited and stand trial in the Eastern District of Virginia.

Press freedom, civil liberties, and human rights groups have long opposed the extradition of Assange to the US. They have warned prosecuting Assange for publishing information would be a terrible precedent. This would be especially true if charges were brought under the Espionage Act. While the Espionage Act has been increasingly used against those who leak classified information to the media it has never been used against the publisher of information.

The indictment unsealed this morning was not brought under the Espionage Age. Assange is charged with conspiring with whistleblower Chelsea Manning to commit “computer intrusion.” The indictment alleges that Assange tried, but failed, to help crack a password on a Department of Defense computer.

The nature of the charge does not mean, as some have falsely claimed, that there are no compelling press freedom issues at stake. Charging a journalist for conspiring with a source raises extremely important press issues. The indictment includes in its detailing of the “conspiracy” practices that are arguably standard source cultivation engaged in by journalists. Part of the conspiracy alleged is that Assange was attempting to conceal the identity of his source. The computer hacking allegations could very well be a backdoor way to criminalize journalism.

There is also no reason to take Donald Trump’s Department of Justice at face value. The indictment pertains exclusively to the publishing of information about the US wars in Iraq and Afghanistan, the Guantanamo Bay prison, and the State Department. These were disclosures of great journalistic value that revealed US governmental misconduct. Since WikiLeaks made this information public, the US government has been out to get Assange. Whatever the formal charge may be, this is a retaliatory effort that endangers press freedom.