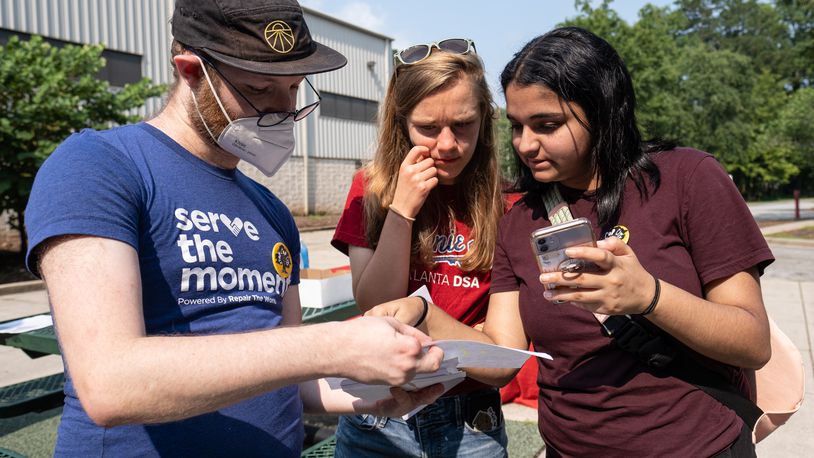 Above Photo: Atlanta-Seth Roseman, from left, Kelsea Bond and Shehza Anjum look over a map before heading out to canvas a Southeast Atlanta neighborhood Saturday, July 24, 2021, against the Public Safety Training Center that has been proposed on the site of the old Atlanta Prison Farm in Southeast Atlanta. (Ben Gray)

Rayshard Brooks’ death at the hands of Atlanta police last June was a tipping point for many activists. The incident came just weeks after George Floyd’s murder sparked a global outcry and thousands took to city streets to protest police brutality.

Some City Council members say they understand the calls for change, but that change takes time.

Council President Felicia Moore told The Atlanta Journal-Constitution the council has done “the best they can” to balance supporting the Atlanta Police Department amid concerns about crime with responding to progressive calls for change.

“It’s an ongoing issue — it’s not something that’s going to turn overnight,” Moore said of improving community trust in police. “It has to be constantly, consistently worked at.”

Councilmembers passed a 7% increase in the police budget on June 7 and proposed a new training facility for police officers days after. Efforts to repurpose the Atlanta Community Detention Center have remained in limbo as some councilmembers have pushed to use the space to reduce overcrowding at other facilities.

Activists who seek to reduce police funding say those measures don’t equate to police reform, so they’re focusing on “people power” to make changes they want to see. That means some groups are hitting the streets in different ways, from going door-to-door to promote specific issues to championing alternative candidates ahead of this fall’s elections.

Kelsea Bond and Nolan Huber-Rhoades, organizers of Defund APD, Refund Communities, said their group operates under a simple principle: “Politicians won’t save us.”

“Under this City Council, nothing is going to change because they are so pro-police,” Bond said. “They’re prioritizing what companies think … over regular people that actually live here.”

The group wants a reduction in the police budget, which they say is exorbitant compared to funding for social services.

Bond and Huber-Rhoades said they’ve communicated with hundreds of residents through citywide canvasses to discuss changes that could reduce policing and redirect resources to addressing precursors to crime like poverty or homelessness.

Some of those issues include shuttering the Atlanta Community Detention Center, which DARC says would reduce incarceration in the city, and prevent the opening of a new police training facility to lessen police resources. They’ve established coalitions with other social justice organizations and promoted public comment forums on social media, contributing to hours-long comment periods.

It’s unclear how much popularity these sentiments hold within Atlanta.

Councilmember Michael Julian Bond, a former activist for the NAACP and son of civil rights leader Julian Bond, said newer activists have operated under the faulty assumption that demonstrating leads to immediate government action, especially if there is no dialogue between those seeking change and elected leaders.

“There seems to be a perception that if people perceive that you’re not going to go their way, they won’t talk to you, and that’s not how it should be,” Bond said. “Change isn’t just being able to bring a big crowd … We’re open to debating, communicating more with the activists and providing help wherever we can.”

But some activists say their policy differences with elected officials are too great to bridge.

Toni-Michelle Williams, executive director of Solutions Not Punishments Collaborative, served on the APD Use of Force Advisory Council created by the mayor’s office two days before Brooks’ shooting. She said she was unhappy with the committee’s desire to continue police investment.

“There was no interest in defunding police on that task force,” Williams said. “We had no hope that investment in those departments would make a difference in our lives.”

A mayor’s office spokesperson said in a statement that community engagement is a “key component” of ****their social justice and police reform approach, pointing to the Use of Force Advisory Council and the One Atlanta: One APD Community Policing Roadmap.

Williams’ group works to protect civil rights for Black transgender and queer residents, who she said are disproportionately have encounters with police.

“There is a very big disconnect between social justice in Atlanta in 2021 and City Council members that are currently seated,” Williams said. “We hope to establish relationships with folks who support us in demanding more.”

A proposal to build a $90 million police and fire training center in unincorporated DeKalb County, partly funded by the Atlanta Police Foundation, is the latest point of contention between the City Council and activists.

Dave Wilkinson, president and CEO of the foundation, said they have felt supported by City Council and the mayor’s office but have not communicated directly with protesters.

Wilkinson said he is “open to having a productive conversation with anyone.” However, he cited an instance where protesters smashed windows and flipped over tables at APF headquarters a few weeks ago as indication that conversations with them might not be “productive.”

“We are 100% emphatic that the vast majority of Atlantans want a safe city and they want good policing,” Wilkinson said. “I want the protesters to understand that we don’t go into this lightly. We’re not building the training center for the police, we’re building it for the community.”

Councilwoman Joyce Sheperd, who sponsored ****the proposal, has received backlash from some upset residents, some of whom protested outside her home.

Among those leading efforts against the training facility is Community Movement Builders, a group fighting gentrification in her district.

Founder Kamau Franklin said the group set up “cop watch” patrols to monitor police interactions in the Pittsburgh neighborhood and met with Sheperd to discuss their views. He called their relationship with Sheperd “antagonistic,” saying they don’t feel represented by her due to the councilwoman’s continued support for police.

“This misnomer that the police itself is some sort of stopgap measure to stop criminal activity is something that you can’t get elected officials to get out of their head,” Franklin said.

Sheperd declined a request for comment, but previously told the AJC ****that her district largely supports investing in police.

With mayoral and City Council elections approaching, Franklin said he is creating report cards for candidates to garner support for those whose views align with his group’s interests. They’re hoping such efforts will bring in new officials who want to prevent crime through addressing social needs and implement “community-controlled” methods like cop watch patrols rather than funding police, Franklin said.

“These folks are only interested in keeping the status quo,” Franklin said. “What we have to do is change the narrative and gain political power so that we can force out some of these people who don’t support alternative ways of thinking about security and policing and safety.”