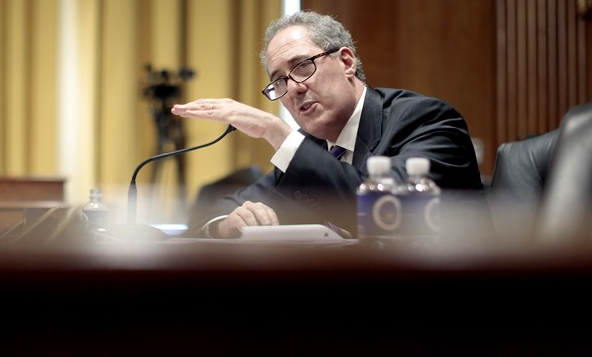 Rep. Mark Pocan (D-Wis.) on Thursday accused the Office of the U.S. Trade Representative (USTR) of “baffling” Democrats “with bullshit” in an effort to advance President Obama’s trade agenda.

Pocan’s remarks, which were triggered by a debate over whether the U.S. enjoys a trade surplus with free-trade partners, mark the latest escalation in a fight between liberals and the White House office over President Obama’s trade agenda.

Obama is requesting that Congress approve “fast-track” legislation that would make it easier to negotiate trade deals, and his team is negotiating two new trade agreements. He’s getting some cooperation from an otherwise antagonistic GOP on Capitol Hill but is running into opposition from the left.

Froman’s office held a classified briefing this week for members, which Democratic opponents of Obama’s trade agenda argued should have been open.

Pocan’s remarks were focused on a recent briefing for members.

“It was a process of baffling them with bullshit rather than providing us with the truth,” he said at a Thursday press conference. “It’s time for the ambassador — if he wants to get this trade deal through Congress — be honest with us.

“Let us sit at the big people’s table,” he said.

“The press conference today was part of an increasingly desperate set of attacks that hard-core trade opponents are trotting out because they’ve realized the facts are not on their side,” the U.S. official told The Hill.

Pocan and Reps. Rosa DeLauro (D-Conn.) and Peter DeFazio (D-Ore.) held the press conference to dispute how Froman and other administration officials calculate trade data that they say shows the U.S. enjoys a trade surplus.

“Perhaps he has gotten access under D.C.’s new legalization law to some marijuana and he’s filling in gaps in his memory with confabulated facts,” DeFazio said, calling the data “totally false.”

DeFazio and his allies argue that data calculated by the U.S. International Trade Commission states that the U.S. had a $177.5 billion goods trade deficit with its FTA partners in 2014.

The U.S. official said progressives are “cherry-picking their own data” to advance their political agenda.

The office of the USTR points to data from the Department of Commerce that shows the U.S. has a trade surplus with its 20 free-trade partners when goods and services, non-energy goods, manufacturing, agriculture and services are included. That calculation yields for a $10.2 billion surplus in calendar year 2014.

They also argue the U.S. had a goods surplus through 11 of its 14 free trade agreements.

“The reality is that the United States runs a trade surplus in goods and services with our collective free trade agreement partners,” USTR spokesman Matthew McAlvanah told The Hill.

U.S. officials have also argued that trade balances are not the only way to judge whether free-trade policies benefit the U.S. economy. They argue that the increased trade from free-trade deals make some U.S. industries more competitive to the benefit of the overall economy.

Rep. Ron Kind (D-Wis.), who is supportive of Obama’s trade agenda, praised the administration’s “willingness to meet with members to form a trade policy.”

“Now is the time for members to engage constructively, especially given that neither legislation nor the final text of any trade agreement has been finalized yet,” he told The Hill.