More than a thousand people gathered nearby at Pershing Park, where Black Lives Matter DC and antifascist groups held a counterprotest and rally on the theme “Mute White Supremacy,” along with a concert of GoGo music.

Memories of the “Unite the Right” rally in Charlottesville, Va.—where Alt-Right and neo-Nazi groups clashed with antifascists and a young woman was killed by a man who drove his car into a crowd—were still vivid. Police closed off the streets surrounding the rallies with large trucks to prevent similar incidents from occurring.

While the Demand Free Speech rally was in progress, black-clad and masked antifascists formed a black bloc and marched toward Freedom Plaza, breaking into a run on F St. Some antifa nearly breached the police cordon behind the rally stage. The bloc and the crowd following it were repelled by a swarm of bicycle cops yelling, “Get out of the street!”

Verbal conflicts between sides broke out from time to time but little violence. In the evening after the rally, the mood changed, as antifa followed rally-goers to the Trump International Hotel where they were holding an after party. One Trump supporter attacked a man and knocked him down. Police arrested the man who was attacked. 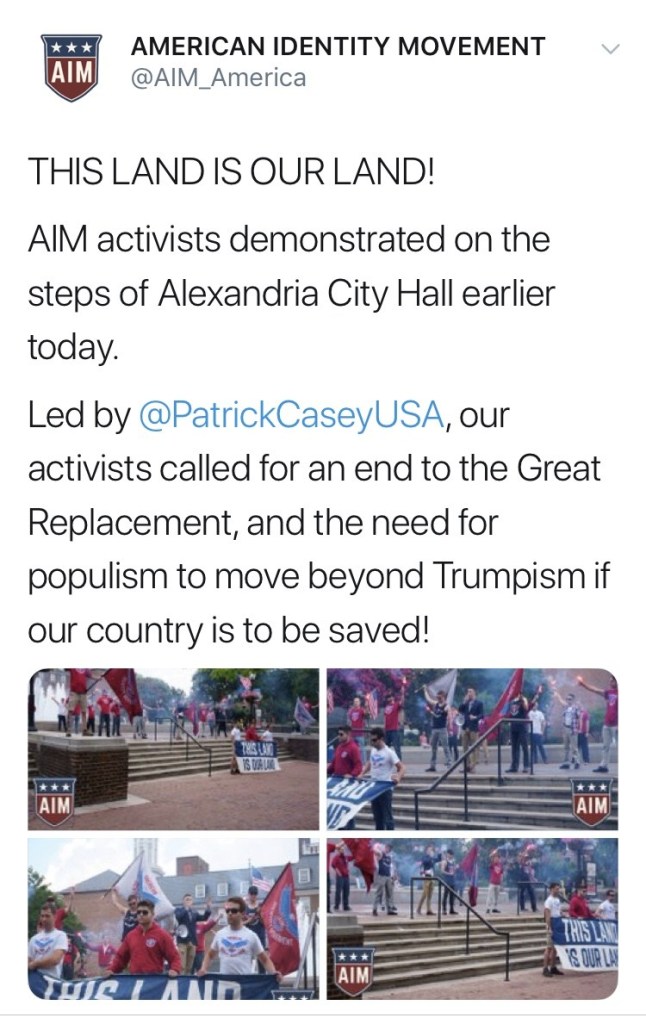 A white supremacist group also carried out a flash-mob in Old Town, Alexandria, Va. late in the day. Members of the American Identity Movement—formerly Identity Evropa—demonstrated in front of the courthouse in Alexandria, Va., with banners and balls of flame. The group has targeted parts of Alexandria and south Arlington with flyers several time in the past.

With Proud Boys shut down by antifascists in Portland recently, Washington antifa was ready to “welcome” Proud Boys, who were playing a prominent role in the Demand Free Speech organizing. Metropolitan Police officers were once again caught displaying their sympathies for white supremacists, when they were shown on video fist-bumping Proud Boys on DC streets on an evening prior to the rally.

In response to claims that the Proud Boys are a violent gang, Proud Boys founder Gavin McInnes told the rally attendees that he wished he controlled “a secret gang of violent right-wing activists.”

“If I did, you’d be dead,” he said referring to his anti-fascist critics. “You wouldn’t be around. I wish I was El Chapo.”

McInnes compared the fighting prowess of the Proud Boys to German soldiers under Hitler who killed large numbers of Russian soldiers early in World War II. He also complained about Trump supporters who aren’t willing to fight or get arrested.

In his speech, Milo Yiannopoulos–former editor of Breitbart, who has incited violence against transgender people and been an apologist for pedophilia–attacked Will Sommer, a journalist for The Daily Beast, who has written about how the Proud Boys is a violent organization. “Will, do you think if the Proud Boys were a gang that you’d still be alive?” Yiannopoulos said, suggesting the group wants to kill the reporter.

Another far-right celebrity, Laura Loomer, complained about the relatively small turnout for the rally. “There ought to be a lot more people here,” said Loomer, who described executives at Google as “communists.”

Several speakers at the far-right rally, including Loomer and Yiannopoulos, have been banned from social media platforms. “The times we are living in are the times of Nazi Germany,” Loomer said, comparing her treatment to how the Nazis treated Jews, communists, anarchists and other groups of people.

Yiannopoulos urged the crowd to report more moderate conservatives, whom he described as elite or “Vichy” conservatives, so they would care about their extremist comrades’ predicament. “The movement requires it. Get them banned. It may sound counter-intuitive, but it is what we need,” Yiannopoulos said.

Massaging public image to gain re-entry to media platforms where some had been banned for hate speech seemed to be a goal of the rally. Rally speakers portrayed themselves as victims of a society out to get them, influenced by elite liberal education and its suffocating “safe spaces” and political correctness. They played up their support of President Trump, patriotism and Christian heritage, while protesting that they were not actually racists, fascists or white supremacists. To do so, they presented speakers who were gay or Hispanic, and pointed out the black people in the crowd wearing “Make America Great” caps. 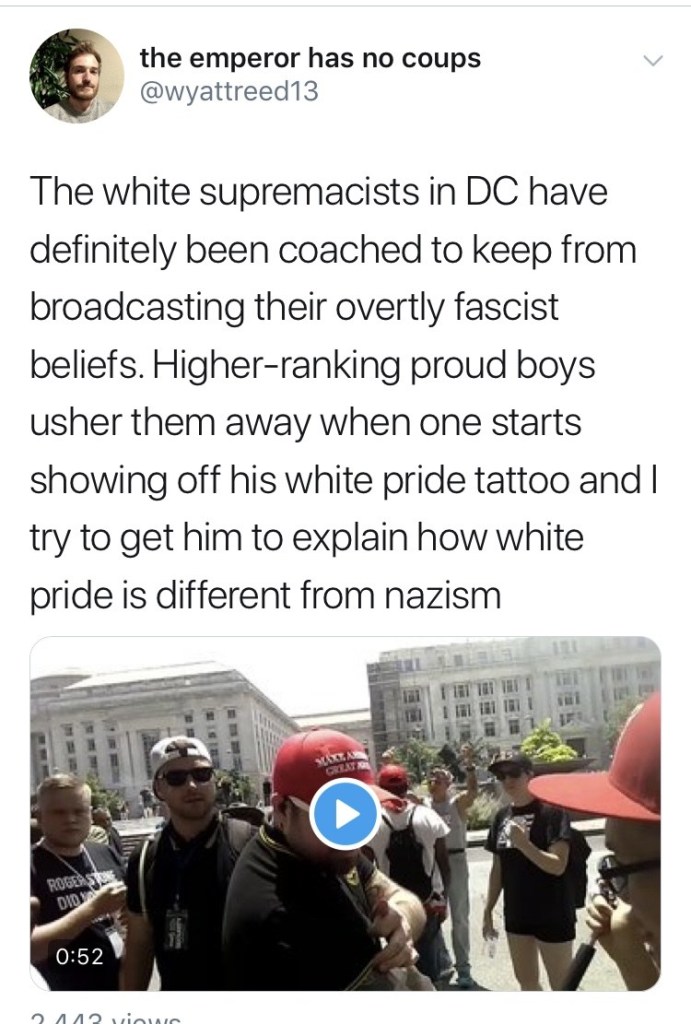 Efforts were made to mask the ugly image and conceal offensive beliefs. “The white supremacists in DC have definitely been coached to keep from broadcasting their overtly fascist beliefs,” tweeted @wyattreed13. “Higher-ranking proud boys usher them away when one starts showing off his white pride tattoo and I try to get him to explain how white pride is different from nazism.”

“It was obvious who they were. We saw people wearing white power t-shirts. I saw someone wearing a Generation Identity shirt. It was all phony,” said antifascist Daryle Lamont Jenkins. When he went to Harry’s Pub, a hangout for the far-right crowd, he also saw someone with an American First Committee for White Supremacy flag.

“If you are at a point where your crew has to be escorted by police for a bar crawl, then something’s wrong with your group,” Jenkins said. “And the police should have better things to do but they’re not. They need to check themselves on that, they’re supposed to be impartial, and they just showed everybody that they weren’t,” he added.

Jenkins disputed that groups participating in the rally were being denied free speech. “The fact of the matter is, they’re not being censored. They are being marginalized. They can start their own social media platforms and they have,” he said.

Jenkins called out the fascists for using people of color as shields. “They tried to play the whole thing that we can’t go after them because they’re not racist.” If you do, “you’re going to be the one that’s racist,” he said.

“It’s insulting when they try to use someone with skin color to excuse the reprehensible ideas, but it’s expected. They use them regularly to protect them from these kind of charges,” he said. 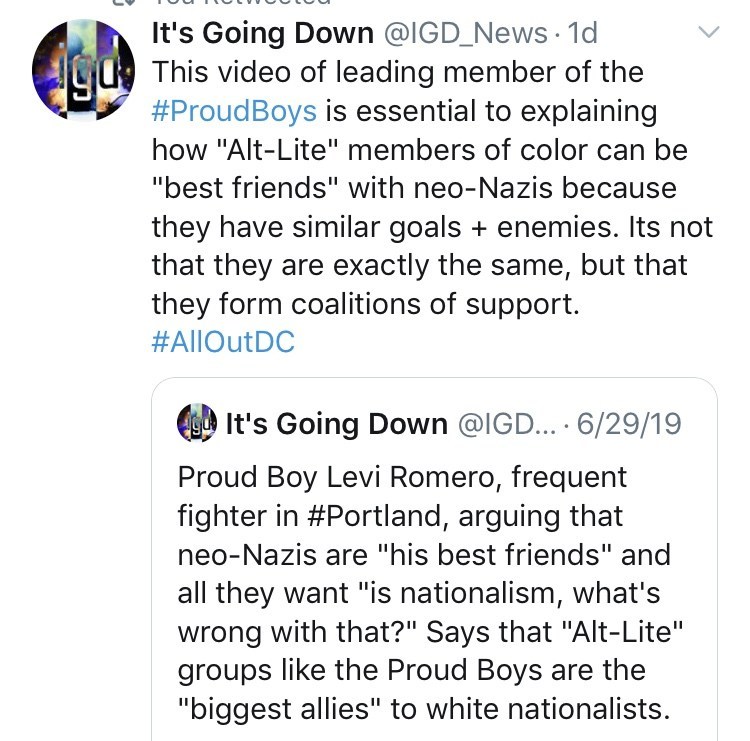 Many people are critical of how antifascists respond to white supremacists and neo-Nazis, but Jenkins disagrees. “I believe in confrontation. I support confrontation one hundred percent. You do have to be aggressive with the Proud Boys. They were formed to engage in physical confrontation and physical violence,” he said, defending antifa tactics.

“You are going to have to be defending yourselves, and that’s the point where folks are frustrated—that we have to do something about this element growing. You have to have that freedom of speech, but you can’t keep telling us what not to do. We have to have solutions and no one is providing them and we have to say, okay, we’ve got to come up with our own,” Jenkins said.

“If you do not like the way that they approach things, and if you think what antifa is doing is wrong, you go out there and do what’s right. It’s that simple.”