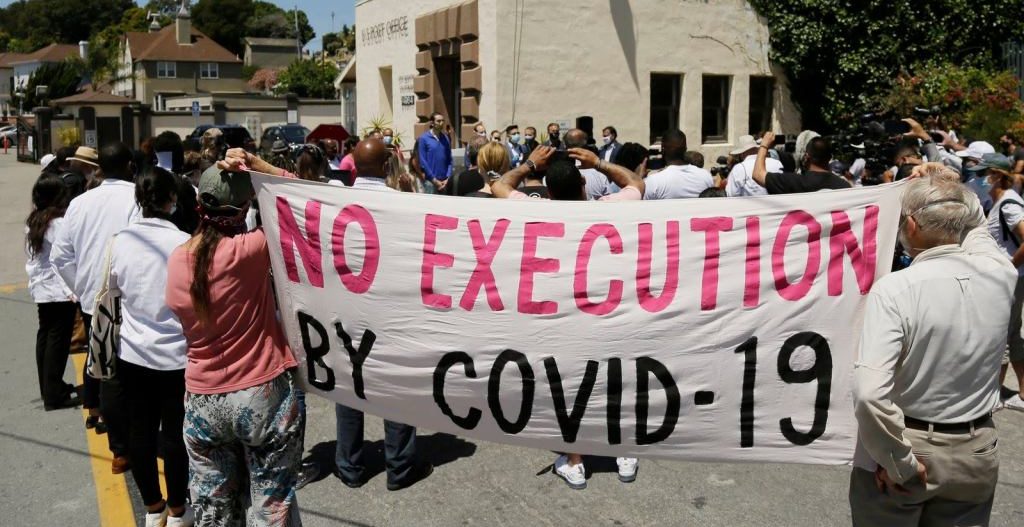 Above photo: “No Executions by COVID-19” banner at news conference outside San Quentin State Prison, July 9, 2020, in San Quentin, Calif. A group of legislators, advocates, academics and public health officials gathered at San Quentin State Prison to discuss a COVID-19 outbreak at the facility that has sickened more than 1,400 inmates with six deaths. AP Photo/Eric Risberg.

Abolition is the road, clemency is the vehicle, now is the time.

UPDATE: Check out theFeb 1st COVID Clemency Caravan and Day of Action organizing and media kit to start plugging in.

As supporters of the #CagingCOVID campaign, the Antistasis Project is calling for decentralized actions on February 1st across the so-called United States, and internationally, in support of mass clemency for people held in jails, prisons and detention centers.

Reports updated as of Jan. 19, show at least 355,957  prisoners have gotten the virus, and more than 2,232 died as a result of it. . The pandemic has resulted in prisons and jails abusing isolation more than ever before. Social distance is necessary but solitary confinement is torture.

Crowded quarters, a lack of PPE, inadequate medical care, an aging population, and unsanitary conditions have contributed to an infection rate 5.5 times higher than the already ballooned average in the U.S.

There have been over 100 documented prisoner rebellions related to negligence over COVID-19 safety (For example, Alabama prisoners have been on strike since Jan 1st). Its time we step it up on the outside. A quick and massive release of prisoners is the safest and most responsible option. In reality, its long overdue.

February 1st was declared “National Freedom Day” in 1949, in a Presidential proclamation recognizing both the 1865 signing of the 13th Amendment to abolish slavery and 1948 U.N. Declaration of Human Rights. Yet all these years later, today’s prisoners are still subjected to conditions those documents were thought to be addressing, from extreme medical neglect and the torture of isolation to outright slave labor.

#CagingCOVID is inviting people to join them in a caravan to DC, where they will have a motorcade rally to hand-deliver their petition to the Department of Justice (DOJ), Center for Disease Control (CDC) and the United Nations (UN) offices.

But there are also countless local and regional targets to apply pressure on in furthering the demand of immediate COVID clemency. Here are some suggestions:

This year of pandemic has highlighted how incarceration fails at ensuring public safety but excels at violating human rights. Agency heads and elected officials have watched for 10 months now as COVID-19 cases in their prison systems have spiked and spread, with a massively underwhelming response.

As of releasing this call-to-action, a new, faster spreading mutation, the B.1.1.7 strain, has been identified in California, Colorado, Florida and New York. Public health experts expect it to be identified in more states in the coming days.

A supposed cornerstone of the legal system is that its “better for ten guilty persons escape than that one innocent suffer.” But in the case of COVID-19, people are suffering and dying in jails without ever having faced trial, when they could have survived in their own home or a hospital; in prisons, people are dying who were convicted (though too often through plea bargains, coerced testimony and factual innocence), but not sentenced to death.

By the state’s own laws, as well as international treaties, this is a far overstep of state power. Its cruel and unusual punishment, its medical neglect. Its state terrorism.

COVID-19 isn’t the first public health atrocity in the prison system, but it has allowed people to see a fuller picture of what mass incarceration means. It has opened the eyes of many to a problem that has lingered for the past 150 years. There are enough parallels on a local or regional level to say the sort of medical neglect and abuse that COVID is highlighting is actually quite commonplace (such as Legionnaire’s Disease and Valley Fever, or extreme exposure to black mold, asbestos, radon, coal ash dust, and even methane from sewage leaks.) And that is the problem.

The clearest way to get people who are held in state custody out of harms way from the pandemic, and the plethora of pre-existing abuses it has highlighted, is through expedited executive clemency. Releases have happened in some facilities across the country, showing that it is possible. But thus far, it has been way too little, much too late.

In federal prisons alone, more than 14,000 clemency seekers are waiting for verdicts on their applications to the Justice Department. But the backlog is not new. In 2014, the Obama administration unveiled a clemency initiative that created new criteria for commutations, with as many as 10,000 inmates expected to qualify. The administration disappointingly granted a mere 1,696. That has to change fast.

Mass releases from the federal system can and should be an example for states to follow. Especially under a new administration that has claimed to plan on correcting its disastrous policy decisions in manufacturing mass incarceration over the past 40 years.

What is “National Freedom Day”?

Its an obscure holiday to most, but perhaps one we should be getting more familiar with, figuring out how to reclaim it, and holding the U.S. to it.

A 1949 U.S. Presidential Proclamation created National Freedom Day to commemorate both the passage of the 13th Amendment on that day 84 years before and the signing of the Universal Declaration of Human Rights approved by the General Assembly of the United Nations a year prior, which declares that “recognition of the inherent dignity and of the equal and inalienable rights of all members of the human family is the foundation of freedom, justice and peace in the world.”

While we know we can’t expect liberation to come willingly from an empire built on slavery and land theft, we need to use strategic moments and symbols to build struggle around. We can make February 1, 2021 one of these.