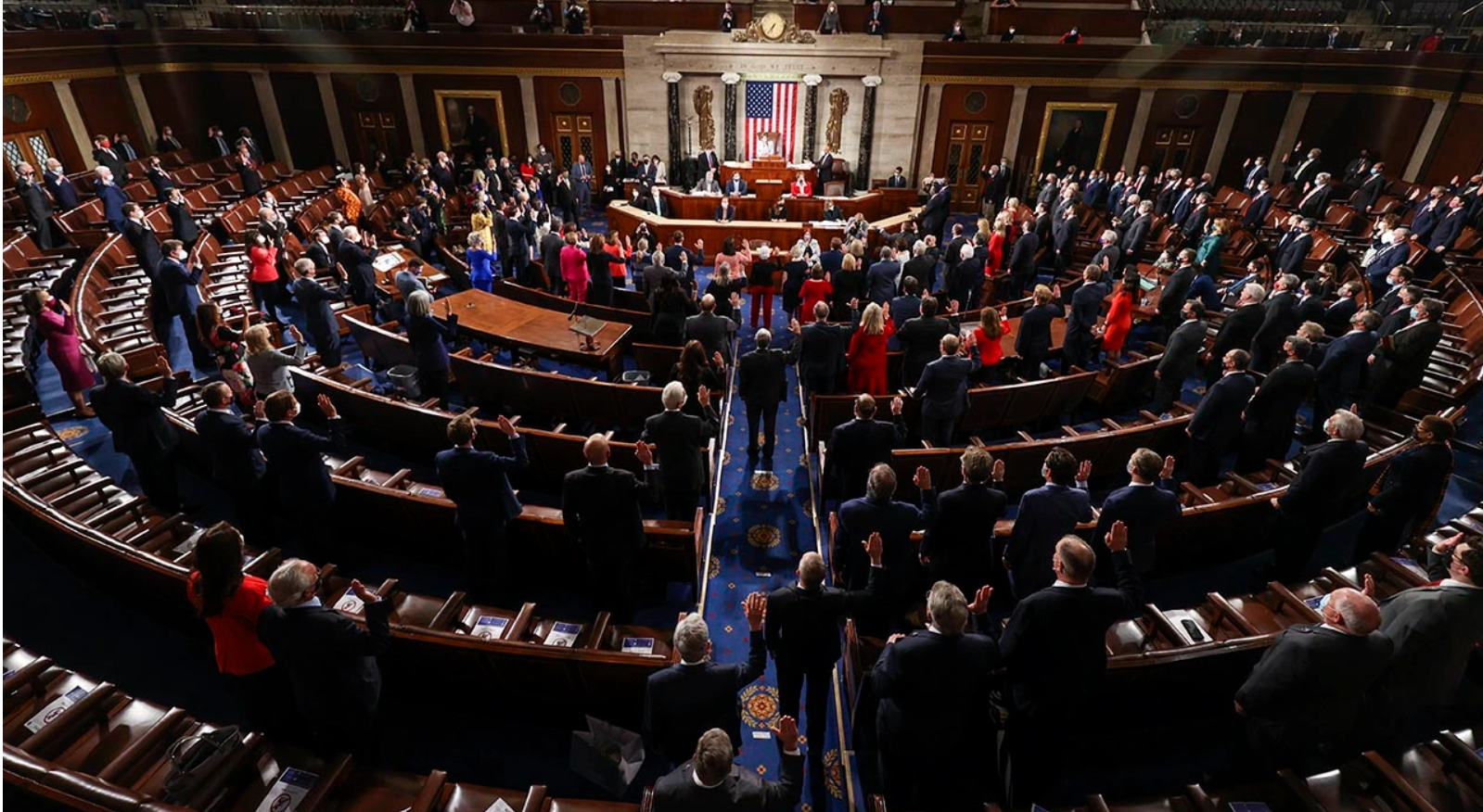 Above photo: Speaker of the House Nancy Pelosi swears in new members of Congress during the first session of the 117th Congress on Jan. 3, 2021. Tasos Katopodis/Getty Images.

Washington, DC – More than 200 political scientists, legal scholars, and historians from academic institutions across the United States released an open letter calling on Congress to reject the United States’ winner-take-all system of elections in the wake of a failed 2020 redistricting process and adopt multi-member districts with proportional representation for the U.S. House of Representatives.

“Our arcane, single-member districting process divides, polarizes, and isolates us from each other,” the letter says. “It has effectively extinguished competitive elections for most Americans and produced a deeply divided political system that is incapable of responding to changing demands and emerging challenges with necessary legitimacy.

“Accordingly, we urge Congress to ensure that this is the last redistricting cycle under a failed single-winner system and to adopt inclusive, multi-member districts with more proportional representation.”

The letter is the latest sign of the growing momentum for proportional representation in the U.S. Despite broad-based scholarly consensus on the desirability of more proportional systems for decades, the instability of American democracy in the last few years has catalyzed greater efforts from activists and academics alike to promote a system for electing Congress that addresses the core problems facing the country.

As the 2020 redistricting cycle made clear, America’s current system of winner-take-all elections allows for gerrymandering, makes the great majority of seats uncompetitive, and fuels the extreme polarization and rigid two-party politics that cause legislative dysfunction. In a proportional system, multiple representatives per district are elected in proportion to their share of the vote, making gerrymandering obsolete, ensuring that every election is competitive, and enabling more electorally viable parties to emerge.

The letter is available here and is included below, followed by the full list of 204 signatories.

An Open Letter to Congress

As the 2020 redistricting process comes to a close, it is clear that our winner-take-all system—where each U.S. House district is represented by a single person—is fundamentally broken. We call on Congress to adopt inclusive, multi-member districts with competitive and responsive proportional representation.

According to a recent analysis of the newly-redistricted House map, more than 90% of districts are effectively a lock for one of the parties this November. This means that many millions of voters have no meaningful say in general elections, with the overwhelming majority of Congress effectively chosen by low-turnout primaries. In other words, winner-take-all increasingly means we already know the outcome of almost any given race.

This collapse in competitive elections helps explain why Congress today is so polarized and held hostage by obstructionist politics. Because 90% of House members don’t have to worry about general elections and are beholden only to their district’s small number of primary voters, extreme elements are overrepresented to the point where one party in our two party system has been taken over by members that reject democracy itself.

Contrary to popular belief, geography—not gerrymandering—is the primary cause of this districting crisis. As the country has sorted geographically, with Democrats concentrating in cities and Republicans in rural areas, it is often impossible to draw competitive single-member districts that offer any semblance of geographic continuity and that keep communities of interest together. In fact, maps drawn by nonpartisan commissions in this redistricting cycle had just as few highly competitive districts as those drawn by politicians.

At the same time, our political divisions are far less dire than our electoral system implies. At the level of narrow, winner-take-all districts, only the majority opinion gets represented and we appear divided between fully Democratic and fully Republican districts. But on the scale of our communities, regions, and states, the United States remains a diverse and complex political tapestry. In 2020, there were more Trump voters in California than any other state and more Biden voters in Texas than in New York or Illinois. The vast—even overwhelming—majority of Americans don’t fit precisely into the ideology of their single-member congressional representation.

Congress has the ability to embrace this political richness by joining most other advanced democracies in moving to more inclusive, multi-member districts made competitive and responsive by proportional representation.

The effects would be far-reaching and salutary. More proportional representation would render gerrymandering obsolete and help ensure that a political party’s share of votes in an election actually determines how many seats it holds in the House. Larger, multi-member districts would mean almost every voter could cast a meaningful vote, regardless of where they live. And as the Supreme Court further weakens the Voting Rights Act, proportional representation allows communities of color to have their voices reflected—and their candidates elected—at the ballot box.

This fix would require only an act of Congress. Proportional, multi-member districts are not only constitutional, they are broadly consistent with American history and political norms. In fact, multi-member House districts were common across the country for over 150 years—albeit without proportional representation, which proved a fatal flaw, as at-large districts were used to effectively disenfranchise minority groups and grossly over-represent narrow majorities. Congress must now improve upon, not ignore, this history.

This redistricting cycle is a wake-up call for voters and our elected representatives. Our arcane, single-member districting process divides, polarizes, and isolates us from each other. It has effectively extinguished competitive elections for most Americans, and produced a deeply divided political system that is incapable of responding to changing demands and emerging challenges with necessary legitimacy.

Accordingly, we urge Congress to ensure that this is the last redistricting cycle under a failed single-winner system and to adopt inclusive, multi-member districts with more proportional representation.