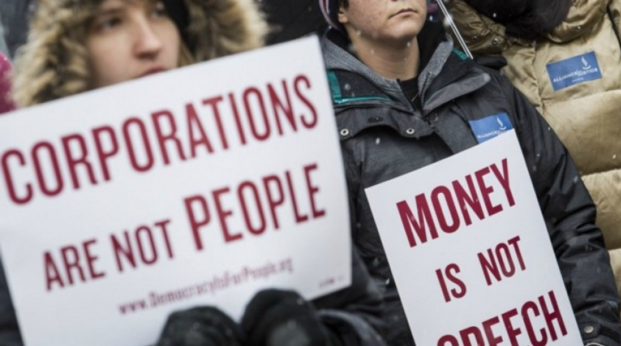 Note: The United States is facing a democracy crisis with elections rigged to ensure the continuation of the two party dictatorship that includes only Democrats and Republicans — two parties that serve the oligarchs of big business. The reality that parties not funded by the wealthy or corporate interests are not allowed to compete is part of the democracy crisis.

The Democracy Spring protest claims to be responding to the democracy crisis but, on a recent telephone call about the TPP, Rio Tazewell of People for the American Way spoke about the Democracy Spring and said they hoped “to influence the outcome of the election in November.” Some of the groups involved are Democratic Party-related PACs or groups that work to elect Democrats including Democracy for America, MoveOn, the Progressive Change Campaign Committee and Progressive Democrats of America. While many of the non-profit organizations involved lean toward the Democratic Party there are no groups related to independent political parties.

The democracy issues they raise do not even include a basic requirement of fair elections — Open Debates. Why? Is including third parties in the debates something that would hurt the Democratic candidate? Right now debates only include Democrats and Republicans because the debates are organized by a corporation created by the two parties and funded by big business.

These are some of the reasons we worry that Democracy Spring is a partisan campaign disguised as a protest. We will report on their efforts but hope it is a protest that is truly about the democracy crisis and not really an election year tool to merely elect more Democrats. KZ

Movement wants big money out of politics, and free and fair elections

Taking their first steps “along the path to a better future,” roughly 150 people on Saturday began a 140-mile march from Philadelphia to Washington, D.C., marking the official launch of the mass civil disobedience campaign known as Democracy Spring.

“Because over the last five years,” the statement continued, “nearly half of the country has passed new state laws that disenfranchise everyday voters. As access to the ballot has become more difficult, people of color, the elderly, and the working poor have been most affected. Meanwhile, billionaires and big money interests have marshalled vast wealth to dominate elections, corrupting budgets and laws to serve the interests of a few at the expense of the rest of us.”

Hence the movement’s dovetailing demands: “Congress must act now to end the corruption of money in politics and ensure free and fair elections.”

The Democracy Spring effort—which organizers describe as “poised to possibly be one of the biggest and most impactful acts of civil disobedience in a generation”—is supported by climate, labor, healthcare, and social justice organizations, along with more than 6,000 people who have signed up to participate.

In the nation’s capitol, a rally is planned for April 11th at the Capitol Building, where demonstrators will call on members of Congress and candidates for office to take the Equal Voice for All Pledge, which commits them to “fight for pro-democracy reform.” In the absence of such a pledge, activists and reformers plan to stage a mass sit-in each day for at least seven days at the Capitol and Congressional offices.

Speaking to Yes! Magazine about why about 3,000 have pledged to risk arrest, Democracy Spring organizer Elise Whitaker said: “It’s fine and good to have rallies and demonstrations. But there’s this energy around wanting to do more, something that’s outside of institutions, something that feels a little more punk rock, honestly. This is how far we’re willing to go. It matters that much to us.”

She continued: “That’ll send a strong message to the American people in a way that hopefully helps galvanize support so we can make meaningful changes soon. We need to win on this issue soon so that we can push on other things like the dire straits that our climate situation is in and the threat to people’s lives in terms of racial and migrant justice. We need to win on this, and we need to win soon.”

Another organizer, Alejandra Pablos, told Yes!: “This is an election year, and all eyes are on this conversation. We’re not the only ones talking about this, but we want to use civil disobedience to give the issue a big platform. I have thousands of people pledged for sit-ins, and it’ll be continuous for almost seven days. People really hear folks when they’re doing something like that.”

According to a press statement:

In light of the repeated misrepresentation of so-called “evangelism” in the public square, and the lewd amounts of money and political energy being spent to hijack the democratic process, Reverends Barber and Forbes and their many friends in the social justice clergy who have agreed to join them, have been called to seek a moral awakening and a Third Reconstruction in America. The deaf ear, the blind eye, and the sharpened tongue of the extremist toward the victims of their mean policies cry out for a prophetic awakening.  Have they no conscience?  Are they blind to the inequalities of income and assets?  To the suffering of hungry children? To the least of these–the poor, the sick, vulnerable?  What motivates their attacks on the hard-won voting rights of minorities?  How can they look their own children in their eyes, while they promote climate warming, environmental and criminal injustices?

“In reference to the Vietnam War in his 1967 sermon, Dr. King told the nation that ‘silence was betrayal,'” Barber said.

“If silence was betrayal in the 1960s, revival is a necessity in 2016,” he continued. “Way too much of our national discourse has been poisoned by hateful language and policies. The extremists see nothing wrong with insulting the poor, the sick, our children, immigrants, communities of color, voting rights, women, LGBTQ people, the environment and religious minorities with their language and their policies. True faith and true evangelicalism place love, justice, and compassion at the center of our public life.”