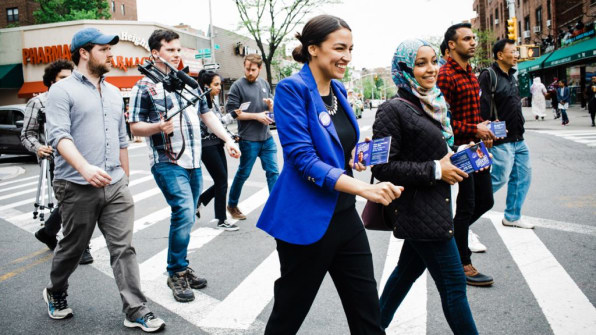 Despite weeks of protests demanding  Democrats to push for a Green New Deal, the Democratic leadership blocked Thursday a proposal by congresswoman-elect Alexandria Ocasio-Cortez to form a committee that would have drafted the New Deal project.

Instead, they’ve decided to back a plan by House Minority Leader Nancy Pelosi to revive a global warming panel lead by representative Kathy Castor.

The move sparked controversy because Castor has dismissed calls to bar people who accept money from fossil fuel companies from serving on the committee, saying it would violate the right to free speech.

“I don’t think you can do that under the First Amendment, really,” Castor said before backtracking. “Maybe that’s a discussion we need to have in the caucus,” she added.

Over the course of a few weeks, the campaign for a Green New Deal gained a striking amount of support. In an open letter last Friday, more than 300 state and local officials said they supported a Green New Deal.

Though Ocasio-Cortez’s proposed committee has been struck down, the movement in support of it has pushed debates around climate change towards policies that could have an impact on carbon emissions and income inequality.

“We don’t have time to sit on our hands as our planet burns,” the congresswoman-elect said in a tweet.

“For young people, climate change is bigger than election or re-election. It’s life or death. Loading a climate committee w/ fossil fuel money is akin to letting foxes in the henhouse. We shouldn’t be afraid to lead.”