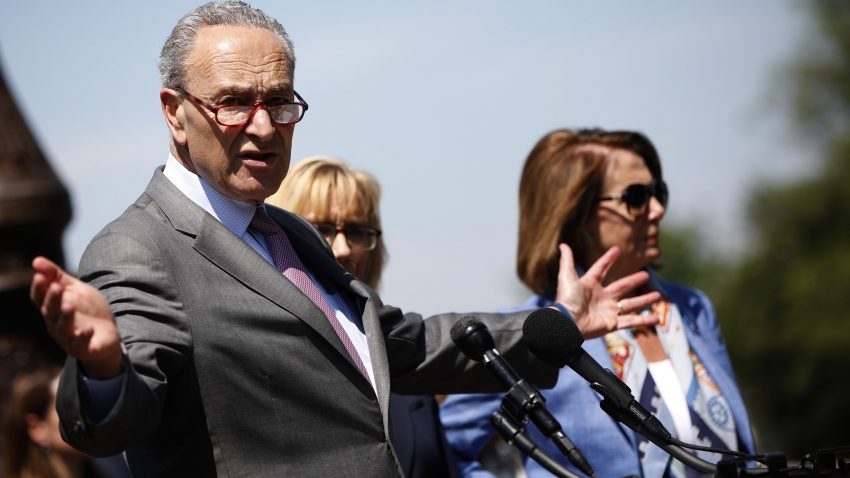 NOTE: We posted this article because it describes the divide within the Democratic Party. It shows that the national consensus forming in support of National Improved Medicare for All and other policies to reduce the wealth divide is having an impact on candidates’ platforms. At the same time, the party is trying to hold onto its corporate-friendly platform.

In Maryland, where Ben Jealous surprised the party machine by winning the primary for Governor, the Democratic Party has rejected him. It is not providing support for his campaign and elected Democrats are not donating money to him. In fact, over 50 Democrats have endorsed the Republican governor and some are putting out flyers that read, “Different parties, same team.” This article does not mention the security state Democrats who are dominating the current slate of new candidates.

The question of whether a capitalist party can be reformed remains unanswered.   – Margaret

If there’s one thing establishment Democrats excel at, it’s covering their ears and whistling the tired tunes of centrism. Despite having experienced colossal electoral losses, the wholesale rejection of their neoliberal politics and the resurgence of a bold left-wing populism across the country, centrist true believers are doing everything in their power to keep the party’s progressive insurgency at bay—even if that means stamping out the newfound energy breathing life back into the party.

Take the Opportunity 2020 conference, hosted in late July in Columbus, Ohio, by Third Way, a centrist think tank. At the gathering, moderate Democrats—including lawmakers and party bigwigs like billionaire real estate developer Winston Fisher, co-host of this conference-turned-consolation session—convinced themselves that their brand of tepid, business-friendly policies is what the public really wants.

Rather than targeting rampant inequality, organizers embraced an economic message of “opportunity” to ensure that each person has a chance to succeed—never mind the skewed playing field that favors the few.

New Democracy, a fellow centrist group, also held a July meeting to plan its counteroffensive to the growing left wing of the party. That group’s message? According to Rep. Cheri Bustos (D-Il.), it boils down to, “the center is sexier than you think.”

Sexiness aside, what would Third Way’s Wall Street-funded vision of opportunity consist of? A privatized retirement fund, a venture-capital-style bank for underserved communities and a volunteer program for retirees called “Boomer Corps.” If this doesn’t sound like a program up to the task of solving the economic crisis facing the working class, conference speaker Rep. Tim Ryan (D-Ohio) made clear the gathering’s real message, a rebuke to the party’s insurgent left wing: “You’re not going to make me hate somebody just because they’re rich. I want to be rich!”

While plenty of Americans undoubtedly want to be rich, more and more are waking up to the fact that the current system depends on them remaining poor. And they’re sick of it: An August poll shows that, for the first time since Gallup started asking the question 10 years ago, Democrats now view socialism more favorably than capitalism.

During this year’s Democratic primaries, left challengers running on bold progressive agendas won across the country, from Ben Jealous in Maryland to Rashida Tlaib in Michigan, Ilhan Omar in Minnesota, Ayanna Pressley in Massachusetts, Andrew Gillum in Florida and Alexandria Ocasio-Cortez in New York.

These candidates have embraced an emerging left-wing consensus platform, including Medicare for All, free public college, a $15 minimum wage and massive investments in renewable energy. A number of them, including Ocasio-Cortez and Tlaib, openly ran as democratic socialists who called out the failure of capitalism to provide working people a dignified life.

This shift to the left isn’t just evident in the primary results. Bernie Sanders’ 2016 campaign helped popularize an array of progressive policies, and they’ve been gaining steam ever since. Universal, single-payer healthcare, free college tuition and a $15 minimum wage now boast the support of a majority of Americans.

The corporate interests bankrolling the Democratic Party establishment remain adamantly opposed to such proposals. It’s no surprise, then, that the party’s centrist wing is terrified. The political enterprise they’ve spent their careers building runs counter to the big, universal, redistributive policies being supported by the Democratic base—and by the progressive candidates in the media spotlight.

The party’s future success hinges on the Left exerting its burgeoning power—in the streets and the ballot box—in a way unseen in recent American political history. That’s the real opportunity Democrats face in 2018 and 2020.

Miles Kampf-Lassin, a graduate of New York University’s Gallatin School in Deliberative Democracy and Globalization, is a Web Editor at In These Times. He is a Chicago based writer. miles@inthesetimes.com @MilesKLassin