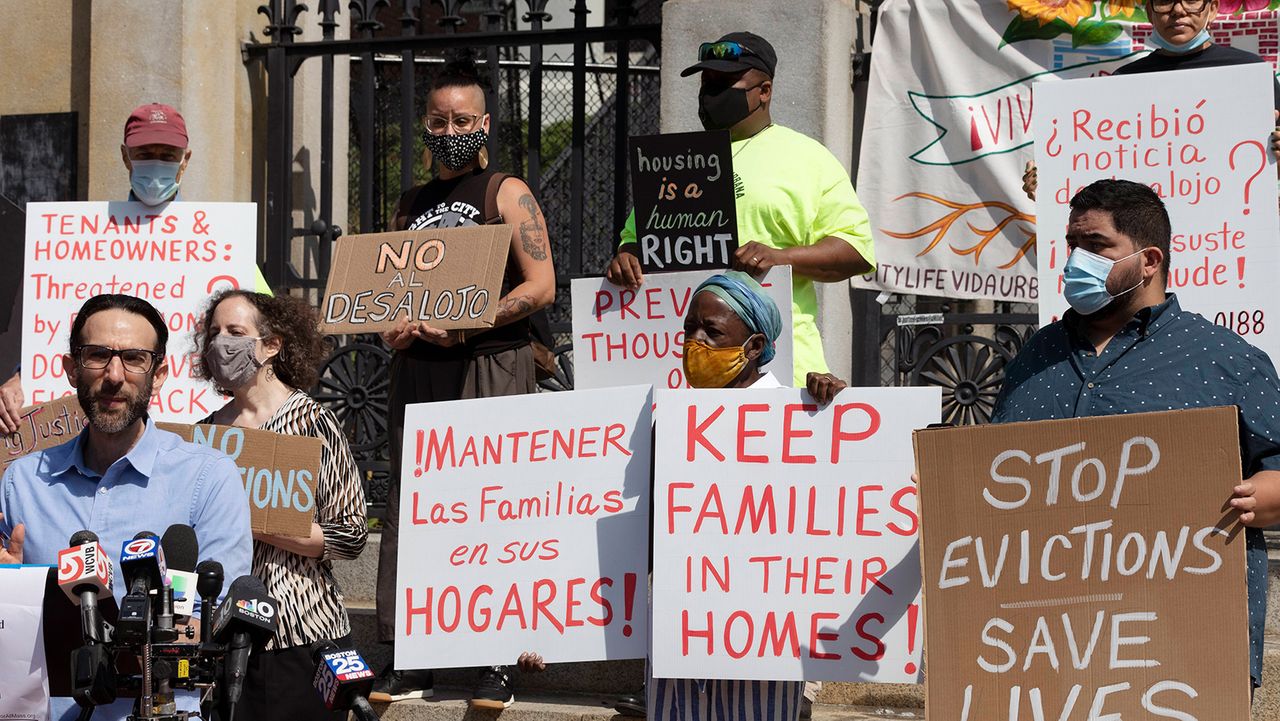 Above Photo: People from a coalition of housing justice groups hold signs protesting evictions during a news conference outside the Statehouse, Friday, July 30, 2021, in Boston. (Michael Dwyer / AP Photo)

The Biden administration announced Thursday that it would allow the nationwide ban on evictions to expire on Saturday declaring that it was up to Congress, with just two days to go, to extend the measure. The White House claimed that the President’s hands are tied, and there was nothing Biden could do for the more than six million families that have fallen behind on rent, citing the Supreme Court’s decision last month to only allow a moratorium extension until the end of July.

According to the Department of Housing and Urban Development, approximately 6.4 million households were behind on their rent by the end of March. As of July, roughly 3.6 million people in the US reported they faced eviction in the next two months, according to the US Census Bureau’s Household Pulse Survey.

A New York Times analysis of the survey data found 250 counties where at least 20 percent of renters are behind on their payments, threatening a severe spike in homelessness across the country. Some counties in the rural South present a more worrying trend, with more than one in four renters being behind. Nationwide, rent debt stands at an estimated $23 billion, with the average household being $3,800 in arrears.

In the 84 most populous urban counties, renters owe a collective bill of $13 billion. Almost 300,000 renters in Los Angeles County owe an average of $5,300 in back rent. More than 400,000 renters in New York City owe a collective $2 billion. Chicago, Houston, Dallas, Miami, Philadelphia, Phoenix and San Diego all have at least 55,000 families at risk of being put out on the streets.

Congress has allocated nearly $47 billion in federal Emergency Rental Assistance funds through the CARES Act, but only a minute fraction has been distributed to renters in need. According to state and federal data from June, only about $3 billion of the first $25 billion in relief has been distributed by states and localities. Some states like New York have distributed almost nothing, while several have only approved a few million dollars.

For example, only $158 million has reached renters in California, while residents applied for over $1 billion in rental aid. South Carolina is faring far worse: under $1 million has been disbursed, out of $39 million requested, accounting for less than one percent of funds being spent. By mid-July, the state’s emergency rental assistance program had only processed 226 applications for rental assistance. Meanwhile, 29 percent of renters in South Carolina reported being behind on rent, the highest percentage in the country.

An NBC News survey found that 26 out of 41 US states surveyed had distributed less than 10 percent of their first round of Emergency Rental Assistance, with many states only beginning to hand out money in June. Experts point to numerous reasons aid has yet to reach tenants, including a lack of federal guidelines for distribution, application processes that are too complicated and excessive documentation requirements to prove one’s need.

Exacerbating the issue is a large eligibility gap, with half of the families facing eviction falling outside of eligibility for federal assistance due to their income. As a result, funds are reaching only a small fraction of those who need them most.

A 2020 report from the Aspen Institute found that nearly a quarter of all US households spent more than half of their monthly income on rent. Tenants in this category were far more likely to be at or below the federal poverty line. These households represent millions of workers struggling to live paycheck to paycheck, or one accident or unfortunate event away from financial ruin. Already ravaged by the socio-economic consequences of the pandemic, these workers and their families, anywhere from 30 to 40 million people, face eviction, putting them at heightened risk of contracting and dying from COVID-19.

On an individual level, evicted families will not be able to easily recover from being thrown out. An eviction is a stain that can haunt a person for years. Landlords often discriminate against individuals with an eviction on their credit history and deny them lodging.

At the same time, the confluence of the rapid spread of the Delta variant with tens of millions possibly being evicted in the coming weeks bodes a social catastrophe.

The Biden administration’s patchwork vaccination campaign has left people in many parts of the country still vulnerable to the virus and its various mutations. The Public Health Informatics, Computational, and Operation Research (PHICOR) organization estimates that more than 40 percent of Americans may not be sufficiently protected against the fast-spreading Delta variant.

Even those who are vaccinated remain vulnerable, as the Delta variant has demonstrated the ability to evade vaccine-granted immunity. And across the US, children under the age of 12 are ineligible for vaccination, further ensuring the spread of the disease as the Biden administration pushes for the full reopening of schools.

The White House issued a limp statement claiming Biden’s sympathy for renters facing a moment of “heightened vulnerability,” with Biden meekly calling on “Congress to extend the eviction moratorium to protect such vulnerable renters and their families without delay.”

“Given the recent spread of the Delta variant, including among those Americans both most likely to face evictions and lacking vaccinations, President Biden would have strongly supported a decision by the CDC to further extend this eviction moratorium to protect renters at this moment of heightened vulnerability,” the White House said in a statement. “Unfortunately, the Supreme Court has made clear that this option is no longer available.”

The Supreme Court ruled in a 5-4 majority last month to allow the eviction ban to continue through the end of July. Justice Brett Kavanaugh, who joined the court’s “liberal” wing in the decision, made clear he would block any additional extensions unless there was “clear and specific congressional authorization.”

Democrats in the House introduced a last-minute bill Thursday to extend the moratorium to the end of the year, but this has only been to save face. The Democrats are fully aware that the bill would immediately die once it reached the Senate, where Democrats intended to pass a one-month extension through a voice vote. However, a single Republican objection would instantly kill the legislation. Considering the vast majority of Republicans and many “moderate” Democrats oppose an extension, there is no question about the fate of the bill.

The impending eruption of evictions is not merely the result of the ongoing pandemic, but rather stems from the conscious policy of the financial elite. Every decision made regarding pandemic policy has been predicated on the interests of Wall Street and American imperialism. Determined to ensure the continued extraction of profit from the working class, the ruling class has eviscerated and abandoned any serious measures to contain COVID-19.

In response to the abandonment of social distancing measures and the forced reopening of schools and businesses, the stock markets have surged, with the Dow Jones Industrial Average and S&P hitting record highs this week. Over the course of the pandemic, the world’s billionaires have seen their fortunes skyrocket in conjunction with the growing number of deaths which have now surpassed four million globally.

The unfolding social crisis in the United States stands as an indictment of the capitalist system, its inability to deal with social crisis, and the ultimate need for building a working-class movement seeking to reorganize society based on human need and not the drive for profit.